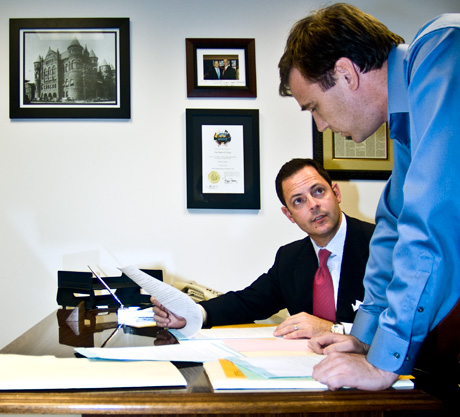 photography by Elizabeth Lavin
photography by Elizabeth Lavin
It wasn’t supposed to be this way. He was supposed to be a jai alai player, like his father, who was rescued from a delinquent youth by the game, eventually landing a contract to play professionally in Florida. Rafael picked up the game at age 4 and was a star by his teens. By the time he was to graduate high school in Miami, he was selected to play for the United States in the 1986 world championships in Spain. Most jai alai players have nicknames. Anchia went by “Raffy Miami.”

Everything changed when he attended a college fair in Miami, where a representative from SMU told him and his father the school had a scholarship with Anchia’s name on it. At first, Anchia balked. His father told him the sport was dying. He told his son, “Don’t you end up like me.”

Coming from Miami, where Hispanics and Cubans run the city, white-bread ’80s Dallas was a culture shock for Anchia. As was the wealth of his new school: his roommate—who, when he saw the name “Rafael Anchia,” feared he would be rooming with an Iranian—asked Anchia what his father did for a living. He told him that his father made jai alai balls. The roommate’s father owned an oil company.

Those who knew him in college, though, are not surprised by his career path. Even then, says fraternity brother Andrew Moss, Anchia was serious-minded, sober, and whip-smart. “You knew he was special,” Moss says. “He’s the kind of guy who, even though he’s easygoing, you always feel like, deep down, he knows a little more than you about everything.”

It was in law school at Tulane and during his first few years as a junior law associate when Anchia finally allowed himself to have some fun, to party a bit. Like most things he tackles, Anchia threw himself into his new role with passion. Co-workers at Patton Boggs, the firm where Anchia worked prior to Haynes and Boone, speak in reverent tones about the bacchanalian excursions on which Anchia would lead other young lawyers. “I can’t tell you any details,” one says, speaking obliquely, as though his phone line were being tapped. “Just ask Raffy about the company trip to Washington, D.C. That’s all I can say. And I’ve said too much.” (Anchia’s response: “This interview is over. Now I have to kill you.”)
Another lawyer friend tells of Anchia mixing it up in Miami. “Some guy tried to start trouble with us,” he says. “Raffy’s friend and he finished it.” The part the friend remembers most about that night, though, was what happened at 3 a.m.

“We’d had a few beers, and we really, really needed something to eat, you know? So we’re headed in this place, and Raffy sees this homeless guy, a neighborhood guy everyone knew. Raffy says, ‘C’mon in with us. Get something to eat.’ I’ll never forget that. Not many lawyers do that.”

The one who settled him was Marissa. He interviewed her for a job at the firm where he worked out of law school. He told his boss, “We can’t hire her. I want to ask her out.” Not only did his boss ignore Anchia’s request, he placed her in an office next to his and sent her to travel with Anchia on business trips—and told him not to date people in the office. “That lasted for, oh, let’s see—about two weeks,” Anchia says, lauging. They dated, got engaged, and flew to Spain to get married. (Before the wedding, he ran with the bulls in Pamplona, along with his best man, Blockbuster CEO Jim Keyes.)

Marissa was a calming influence on him, as were the children. Without them, he knows he would become a workaholic, be unable to detach from the dual grind of Austin and his law job. (He says now the only bad thing about juggling politcs, law, and family is that he needs a new exercise routine to take care of his “Lege gut.”)

There was one other influential event that has shaped the lawmaker Anchia is today. One he doesn’t like to talk about. For obvious reasons.

“The thing that really affected him, though, was when his legislator friend from Houston died,” his friend Andrew Moss says. “That’s when he -seemed to really bear down, you know? Like he was racing against the clock.”

===”So we’re headed in this place, and Raffy sees this homeless guy, a neighborhood guy everyone knew. Raffy says, ‘C’mon in with us. Get something to eat.’ I’ll never forget that. Not many lawyers do that.”!==

Even now, four years later, Anchia doesn’t like to talk about it. He sees the man’s family members every year when the session begins, and it just opens old wounds. But Anchia doesn’t deny the profound effect the tragedy had on him.

They were to take a much-needed break, a road trip to Houston to watch some basketball. Anchia would accompany another state representative, his friend Joe Moreno (D-Houston), to a playoff game between the Dallas Mavericks and the Houston Rockets. They already had a friendly wager on the series: If the Mavericks won, Moreno would have to wear a Mavericks jersey on the floor of the House. If the Rockets won, Anchia would wear a Rockets jersey. So Moreno drove Anchia and a legislative aide to Game 6 in Houston. Anchia watched his friend gloat through a decisive Rockets victory to force a Game 7 in Dallas.

On the ride back, without warning, Moreno’s truck veered onto the shoulder. When he overcorrected, the truck smashed into the median. Anchia emerged largely unharmed. Moreno died at the scene. (Toxicology tests would find no drugs or alcohol in Moreno’s system.)

Anchia won’t talk about the accident. The pain is still fresh in Moreno’s family, and he doesn’t feel comfortable discussing it. But everyone around him acknowledges how deeply the tragedy affected Anchia. To this day, when he rides in the passenger’s seat, he is prone to putting his foot quickly and nervously to the floor, as if to press an imaginary brake.

It’s a cliché that good can come from tragedy, one that may hold within it a kernel of truth, but only a kernel. For the most part, only sadness comes from it. Perhaps Anchia emerged a more focused, mature person, but that means nothing compared to the loss of  a colleague. Loss diminishes; it does not enrich. He would rather be a bit more carefree, a little more irresponsible, if that meant having his friend at his side. But the fact is, his friends say, after the accident, Anchia seemed even more determined to honor his friend Moreno’s memory: work hard every day to be a good representative, make the right decisions, don’t put off till tomorrow what can be done today. It is also why, even though the Mavericks won the series, Anchia wore the aforementioned Rockets jersey on the House floor: simply to honor his friend.

Recommitting to what one feels is important is natural after a tragedy, but what if both family and work can be seen as important? Which one wins out, then? If the answer is family, as Anchia says it is, that still doesn’t settle the question. Because in the Anchia family, his wife is unafraid to remind him of the responsibilities of public service.

That’s how he got where he is in the first place. When Anchia decided to run for DISD school board in 2001, he barely beat a five-person field with just over 50 percent of the vote. He liked the job, enjoyed the responsibility that went with it, the sense of accomplishment in trying to right a slow-moving ship. But when District 103 state rep Steve Wolens called in 2004, Anchia wasn’t looking for a larger political role.

“He told me that he’d decided he wasn’t going to run again, and that I was the first person he was telling, because he wanted me to run for the seat,” Anchia says. “I was honored, but I didn’t want to do it. My wife was expecting. I was starting a family. I had a good practice going. I was up for partner. I would be away from the family, and I’d have less earning power. Timing is everything, and the time didn’t feel right.”

He told Marissa about the phone call, figuring his pregnant wife would agree he shouldn’t complicate their life anymore at that point.

Instead, she told him a story about her father. He was a county judge in the Corpus Christi area. His work was time-consuming, and so she understood family sacrifice for public service.

Then Marissa told him about her father’s dreams, the grandest of which was to one day be a state representative. Finally, her father ran for office, losing to longtime legislator Ernestine Glossbrenner.

“If you don’t do this,” Marissa told her husband, “you will always wonder, ‘What if?’ ”