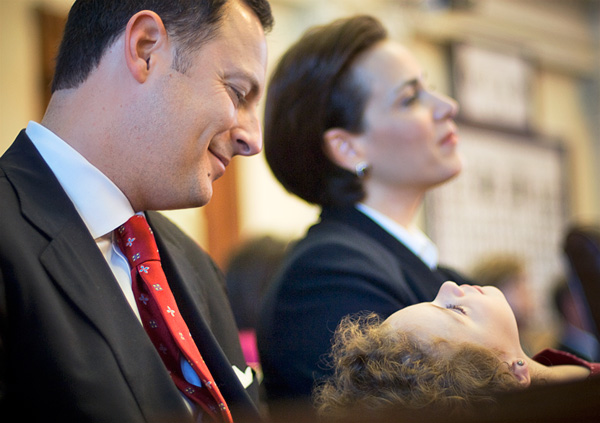 HERE’S LOOKING AT YOU: Anchia on opening day of the 81st Legislature, with his wife, Marissa, and daughter Maia. photography by Elizabeth Lavin
photography by Elizabeth Lavin
Liz Zornes, chief of staff for Rafael Anchia, begins to move her hips. It’s 15 minutes before the opening session of the 81st Legislature in mid-January, and Anchia’s office, deep in the subterranean maze of the State Capitol basement, is filled with family, friends, and well-wishers. Children mill, staff is harried, and Anchia’s madre is wondering aloud in Spanish as to the whereabouts of her son. Zornes, though, is taking a moment to invite a photographer to that evening’s celebration of the new legislative session at a nearby nightclub.

“Have you ever seen Rafael dance?” she asks the photographer, who enthusiastically notes that she has indeed. Both women smile. “Rafael loves to dance.”

Anchia appears, walking quickly but, as always, put together as though he sprang to life from a political consultant’s dream: perfect suit, hair in place, twinkle in his eye. Only his hurried voice and wide eyes give hint that the Anchia posse is running very late. “We gotta go, people,” he says loudly. “Big, big day.”

The buzz on the floor of the Texas House is strong, and it sends a charge through the packed crowd. Today the autocratic Speaker of the House, Tom Craddick, was being ousted in favor of moderate Republican Joe Straus (R-San Antonio). Anchia, who prides himself on his ability to work with members of both parties behind closed doors, seems positively giddy. (Both are considered Young Turks of the Lege: Straus became a representative in 2005; Anchia in 2004.) Months earlier, when I asked Anchia for names of Republicans with whom I could discuss his backroom bargaining style, he gave me two: John Carona (R-Dallas) and Straus. In a word, he’s stoked.

A few hours later, after the largely ceremonial opening afternoon festivities and speechifying have concluded, Anchia strolls up to Straus at the buffet table set up in the hallway behind the House chambers. They glad-hand, talk pleasantries, and briefly exchange game-faces as they discuss work to be done. “I’m hoping he doesn’t appoint me to the Elections committee,” Anchia later tells me. He’d served on it the past two terms, and he found it too partisan and divisive, which made it hard to get work done. And SB 362 would not help.

Voter ID, or Senate Bill 362, is the most divisive issue in this legislative session. Republicans say they’re simply trying to avoid polling fraud by requiring that voters show a photo ID or two alternative forms of identification before voting, beginning in 2010. Democrats say this is a disenfranchisement bill that unfairly targets minorities, the poor, and the elderly, and they say it is really just designed to stem the rising tide of Democratic victories statewide.

Alas, when the committee assignments are doled out in February, he is placed on the Elections committee. (He is named to three committees, and named vice-chair of one.) He becomes the House Dems’ point man on the issue. “And I’ll fight the good fight,” he says. It also just happens to be a made-for-TV fight, guaranteeing him time on TV stations through the rest of the legislative session. Irrelevant circumstance, or good political timing and fortune? A little from column A, a little from column B.

Not that his central role in the Voter ID battle disheartens him. Anchia’s grandfather was a shepherd in the Basque region of  Spain. The offspring of shepherds, as Malcolm Gladwell has noted, are notoriously comfortable fighters, as they come from a culture where they must constantly defend the family’s livelihood against thieves and animals of prey. Later in February, Anchia shows he is ready to do everything he can to protect his flock from a bill that he and others consider particularly harmful to the poor and elderly:

“When I looked at the [committee] assignments on the Elections committee, the speaker didn’t really follow through on bi-partisanship in that committee,” he tells WFAA Channel 8. “He didn’t even put a veneer of bi-partisanship. On most of the committees, you have a Democratic chair with a Republican majority. He didn’t do that here.” He concluded by predicting, “They’re going to have a fight on their hands.”

It’s in the trenches where Anchia shines. When he walks toward the mike in the back of the House to argue a point, observers say, the person in front of the House better be ready for a verbal battle. Anchia in fact is famous for a video on YouTube in which he systematically eviscerates the screeching arguments of Rep. Jodie Laubenberg (R-Wylie), calmly telling the screaming representative, “Just because you yelled it doesn’t make it true.” In that way, he’s not unlike Steve Wolens, his predecessor in District 103.

“Anybody, on either side of this debate, who watched Rafael Anchia fight that voter suppression legislation from the back mike of the Texas House of Representatives last session had to have been deeply impressed,” says blogger and BurntOrangeReport.com contributor Harold Cook. “It reminded me of when Steve Wolens was in the House. If Anchia is in a fighting mood, the Republicans are sure gonna know they were in a fight.”
(It would seem natural, then, that Anchia would be a trial lawyer. But that was never in the cards, he says. “I didn’t like evidence class in law school,” he says. “A silly reason not to become a litigator, I know. But there it is.”)

A week before Senate Bill 362 is to reach the House in early April, Anchia is spending every moment possible working to kill it—or, at the very least, maim it. As the public face for the Democrats on the issue, he takes every opportunity possible to argue for provisions to be added like one that would criminalize voter suppression (which Dems are convinced is actually the goal of SB362). He calls late in the evening on Sunday, after a full day spent in meetings about Voter ID strategy, driving to his Austin apartment. He sounds weary, the hope of January’s opening day long forgotten. “Maybe they will actually offer us a good bill by the time we get to hearings next week,” he says. “But there’s not a lot of trust there.”

In the weeks that follow, he will look for places to strike a conciliatory tone, like when it is suggested that Republicans will wait until 2014 to implement the changes. He understands the game: carrot and stick, pick your fights, compromise when necessary.

“I love the challenge of this job,” he says. “The challenge of learning everything I can about an issue, from stray dogs to transportation to plastic bag taxes to border security. You have to have a breadth of understanding.”

That is, of course, only half (or a quarter, or an eighth of) the battle. “There’s also dealing with 149 other egos and personalities. It’s fascinating. And, trust me, finding commonalities is a challenging exercise. And it’s vital that the people you work with trust and respect you, so you can best represent your constituents. So you can get things done. That’s what I’m here to do. Get things done.”