Paris has the Eiffel Tower, New York has the Empire State Building, and Dallas has Reunion Tower.

Apologies to the classy, silver-star-studded Republic Center; the groovy, curved glass windows of Hunt Oil Tower; and the glowing green neon outline of Bank of America Plaza. You are all beautiful, and your silhouettes against the big Texas sky make Dallas easy on the eyes. But if I showed your picture to a man on the street in Kyoto, Japan, he wouldn’t recognize you. However, that nice man would point to a photo of Reunion Tower and say, “Ah, Dallas. J.R.”

Reunion Tower is a special place. For almost 30 years, its rotating restaurant, Antares, provided a destination for tourists and the setting for special celebrations. A whole generation of locals has grown up going to birthday parties, anniversaries, and bar mitzvahs there. Scores of name-tag-wearing conventioneers have taken the 68-second elevator ride to the top. Antares may have been cheesy, but it was unique-to-Dallas cheesy. When the old gal closed in November 2007, many were sad to see her go.

So why was I dismayed to learn that Wolfgang Puck, an Austrian-born California mega-restaurateur, was taking over the Dallas landmark and opening an expensive chichi Asian restaurant with the silly name Five Sixty (for its height, 560 feet)? Because I’m a homer. I would have preferred to see a local chef shine from the sassy spot in the Dallas sky. Dean Fearing could have put in a Luchesse gift shop. Diners could have eaten Stephan Pyles’ Southwest cuisine while feasting their eyes on the Southwestern landscape. What wouldn’t Tristan Simon have done to make it right? 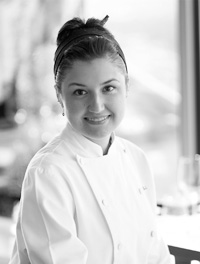 Puck is a tireless promoter. He is excitable and passionate. His job has him one day serving a specially requested burger to Tom Cruise, and the next teaching a line cook how to be an accomplished chef. This is exactly what he and executive corporate chef Lee Hefter did with Five Sixty’s executive chef Sara Johannes.

Johannes was a line cook at several tony spots—Lucia’s and Nicollet Island Inn, both in Minneapolis—before she landed the same job at 20.21, Puck’s Asian restaurant in the city’s Walker Art Center. “I just kept working my way up and asking for opportunities and learning things,” Johannes says. “Mr. Puck is a really genuine person, and he’ll work beside you and not be overbearing. He loves food and teaching people, and you can feel it in all of his restaurants.”

It would be easy to tag Johannes as too young for such a big job. She mans a kitchen staff of 20 in a high-profile restaurant, and she’s only 32. She’s girly cute with long brown hair and a clean scrubbed face, and she giggles a lot when she talks.

But twitters aside, the food at Five Sixty is serious stuff. The menu, a compilation of greatest hits from Puck’s Spago, Chinois, and Cut, has numerous items that take three days to prepare. All of the recipes have been workshopped to perfection. Bold and intense flavors from India, Korea, Thailand,  and China accent a variety of seafood, noodles, and meats. 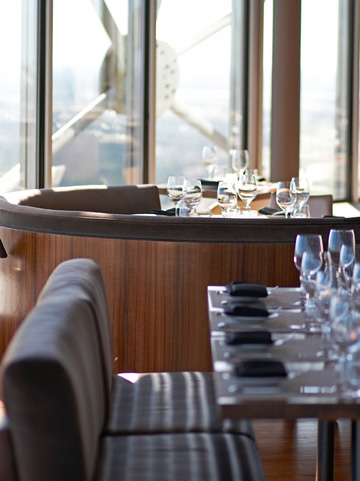 The interior. photography by Kevin Hunter Marple
photography by Kevin Hunter Marple
One bite of the suckling pig sends a message to your brain: this is a dish with a long prep time. An entire pig is deboned and cooked in duck fat and custom-blended Chinese ten spice for eight hours. The meat is removed and mixed with more spices and fat, patted down on top of the skin, and refrigerated overnight. The result is an inch-thick layer of pâté-like meat under a crispy skin. The accompanying pureed plum sauce tangs against the rich protein.

The Cantonese-style duck is also painstakingly prepared. The skin is separated from the meat, and the duck is bathed repeatedly with a boiling mixture of red Chinese vinegar, sugars, and spices. The ducks are hung to dry for two days before they are stuffed with aromatic spices and slowly roasted. The accompanying fruit sauce changes with the season. We were served a slightly sweet blood orange reduction. The acidity of the orange was the perfect foil to the anise- and cinnamon-scented roasted meat.

Puck aficionados will recognize dishes such as Tuna Cones, tuna served in sesame miso mini-cones, one of Puck’s signature appetizers. (Thankfully, the corporate folks haven’t trademarked it—at least not yet.) The thin cookie dough tuile is hand-shaped into a tiny cone and stuffed with fresh ahi mixed with chili garlic aoli and topped with traditional sushi toppings such as shaved bonito and tobiko. Pop the whole thing in your mouth for a full-on blast of salty, sweet, and smoky flavors that collide with the cool tuna. It’s gimmicky, but it goes down easy given the scene—a rotating dining room filled with servers snapping photos of celebratory locals and tourists.

On all three of my visits, I saw many diners eating steak, which is to be expected. This is a hotel in Dallas, after all. Not that there is anything wrong with eating a steak; here you can order a truly Texan 30-ounce bone-in rib-eye. But if you are considering a trip to Five Sixty, this is the place to try new flavors, such as yuzu (the sour Japanese fruit is wonderful in a martini) or dashi, a broth made from dried bonito tuna flakes. Chances are you won’t recognize a lot of the ingredients, but don’t be afraid to ask. The staff is familiar with the menu, because chef Johannes put every dish through a rigorous testing process and used the servers as tasters.

The interior is stark and sleek, and unless you pay attention to details, you’ll be too busy taking in the Dallas skyline to notice the Zen-like interior design. The circular restaurant is divided by two ultra-contemporary cocktail lounges. Although the staff claim they don’t lose their way as the restaurant turns, it’s fun to watch people look for their table after a trip to the restroom. However, on one visit, we were served four unordered desserts. Noting the confusion, the server immediately said they were compliments of the house. But one of the plates read “Happy Birthday.” Minutes later we heard a birthday celebration in the next room. 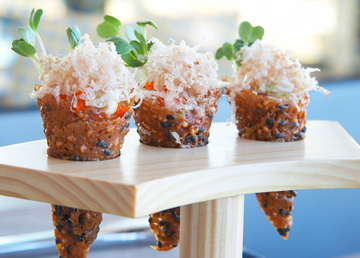 TAKE A SPIN: Spicy tuna tartare in miso cones. photography by Kevin Hunter Marple
photography by Kevin Hunter Marple
The staff is well-trained by general manager and popular Dallas restaurateur Shawn Horne (Kitchen 1924). Once you are seated, they suggest a Belle Glos Pinot Noir ($127) as the perfect wine for the food. The cherry and lightly smoky undertones of the California wine do complement the bold Asian flavors, but the wine list has plenty of other food-friendly selections at half the price.

Dallas has a reputation for kicking big-name operators like Smith & Wollensky, N9NE, and Il Mulino to the curb. We’re territorial and like to do bidness with our own. But in these trying times, anything can happen. Perhaps in 30 years I’ll show a picture of Reunion Tower to a man in Kyoto, and he’ll say, “Ah, Dallas. Wolfgang Puck.”