There are some people in the Dallas restaurant business who think Judd Fruia is a lunatic. Not only did he open a steakhouse a week before Christmas in a withering economy, but he opened a steakhouse with an Italian flair. And he did it in a seemingly cursed location, where two steak restaurants—Fleming’s and Rick Stein’s—have already failed.

But let’s not call Fruia crazy. Let’s call him a dreamer. After working hard for someone else, he has finally opened his own place. Fruia spent 18 years with Pappas Bros. Steakhouse, rising to general manager over the entire Greek steak empire. “My specialty was going in to struggling locations, cleaning them up, and turning them around,” he says. In the process, he built a base of loyal customers, and, over the years, he says he got plenty of offers from his moneyed clientele to back him in his own place.

One suitor, Tristan Simon, finally seduced Fruia to leave the security of the corporate world. Simon lured Fruia to Consilient Restaurants’ lair, where Fruia spent two years working in the less-structured Fireside Pies. “I’d done everything at Pappas short of marrying into the family,” Fruia says. “I went to Consilient for the title: director of operations. It was great, so free. We didn’t use any recipes.”

But the 100-hour workweeks, the lack of quality time with his two young boys, and his wife’s diagnosis of ovarian cancer convinced Fruia to turn around. “She’s fine now,” he says. “But at the time, I told my wife, ‘The title and money aren’t worth it.’ So in 2007, I went back to Pappas.”

Then, last summer, the “itch happened again.” He rounded up two longtime friends, Jay Lombardo and Charlie Turano, and formed a partnership. They started looking at property. When Rick Stein’s Steakhouse closed last July, the trio couldn’t pass on the deal. The turnkey costs were low. Fleming’s had spent all of the hard dollars on the finish out, and Stein had cultivated a strong customer base in the neighborhood. Fruia and company spent the majority of their start-up money upgrading the kitchen and banquet room and changing some of the lighting.

Staffing, usually the hardest part of opening a new restaurant, was easy. Fruia didn’t have to advertise. Former Pappas Brothers waiters sought him out, and he kept some key people from Stein’s. “I didn’t have to teach any young dogs some old tricks,” Fruia says. He found good fortune in the kitchen, too. Tre Amici’s executive chef, Tim Soufan, trained at Le Cordon Bleu in Paris and was the original corporate chef for Pappas Brothers. Soufan is credited with creating the successful Pappas steakhouse menu. 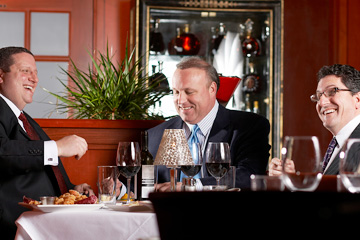 From left, investors Judd Fruia, Jay Lombardo, and Charlie Turano. photography by Kevin Hunter Marple
photography by Kevin Hunter Marple
All of which might lead one to assume that Fruia’s Tre Amici Steakhouse is just a mini-Pappas. But it’s not. Not by a long shot. For starters, literally, there is the aforementioned Italian flair that on our first visit translated into gently fried calamari mixed with hot Riposto peppers and bits of artichoke we dipped into a spicy puttanesca sauce. The Riposto pepper, like the three partners—Fruia, Lombardo, Turano—has deep roots in Sicily. Fruia’s grandparents emigrated from Palermo to upstate New York. Lombardo’s came from Catania and ended up in Brooklyn. And the Turanos left Riposto for Houston. Fruia spent his childhood summers on the family property in Sicily. “I grew up on fresh olive oil and olives,” he says. “I’ve been drinking wine since I was 5.” The family still owns land near Palermo, and Fruia plans to visit this summer. “I love steak, but I am Italian,” he says. “I wanted to incorporate that into a steakhouse.”

If Fruia returns to Sicily, I hope he picks up a few recipes. Because despite the lovely plate of calamari, most of the Italian entrees we sampled paled in comparison to the steaks. We tried three cuts—an aged 16-ounce, wet-aged New York strip; a 9-ounce filet; and a 16-ounce rib-eye. All three were as good as any Prime steak in Dallas: charred black on the outside, with a warm, red center. Each bite was tender to the touch of the tine and tooth, and brought a short finish of butter and salt.

Most high-end Italian restaurants in Dallas fail to produce passable main dishes, so why would Fruia think he could do both on one menu? As my friend devoured a steak, I poked at a huge pile of chicken Marsala. The pan-seared cutlets were undercooked, and the breading, a thick seasoned flour, separated into small clumps in my mouth. A heavy sprinkling of chopped porcini mushrooms helped, but overall the dish was a disaster. An ambitious house-made ravioli stuffed with braised veal cheeks was equally tragic. Each disk of undercooked pasta was stiff enough to hold up and eat like a cracker. The good news is that the smaller dishes—such as a side order of pasta Bolognese, the fig mostarda sauce, a snappy panzanella salad, and house-made spumoni—all work as nice Italian touches.

While we were tempted to order fresh lobster for $18.95 per pound, we switched at the last minute to sea bass. Our low expectation was blown to smithereens when we were presented a bowl filled with fresh mussels and Italian sausage sitting in a shallow pool of delicate saffron-scented tomato broth and topped with a perfectly pan-fried slab of sea bass.

Side dishes were simple and, for the most part, well executed. Both the spinach and the green beans were barely steamed and crunchy, not overcomplicated with cheese or sauce. We could go the rest of our lives without another serving of lobster mashed potatoes and fries topped with truffle oil, but if you love them, Tre Amici serves them. 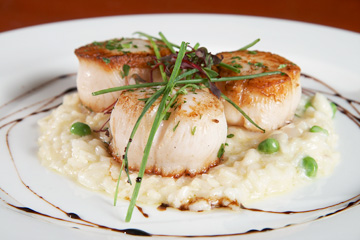 SUPER SEAFOOD: New Bedford scallops on lemon pepper risotto. photography by Kevin Hunter Marple
photography by Kevin Hunter Marple
There is a lot more to like about Fruia’s restaurant. The dining room is open and accommodates large parties and mingling, yet private booths ring the room and allow diners to be part of the party from a quieter distance. Fruia scored a musical coup when he convinced pianist W.T. Greer to leave the Library Bar and play in his bar most nights. Greer comes with his own fans, and they come to have a few drinks before and after dinner. Most steak places in town would kill for that type of business right now.

Not surprisingly, it’s the service that gives Fruia’s an edge over his competitors and a fighting chance to survive. Most of his staff has worked for Fruia before, and it is obvious to the customer that they are comfortable and confident, a rare occurrence in a new restaurant. The wine list, inherited from Rick Stein’s, is heavy on California Cabernets (six single-spaced pages), but there are some great buys on familiar wines, and new additions from all over the world are “already ordered.”

The wine steward, Dan Gillette, has the seemingly short list of 550 wines under control. No shock here—he worked with the endless list of 2,400 selections at Pappas Brothers in Dallas. “We don’t want to make wine cumbersome or scary,” Fruia says. Now that would be crazy.