Featured in Everything You Ever Wanted to Know About Dallas Blondes

How she came to rule over everything she surveys.

When mankind’s scroll is etched with the last syllable of recorded time, it will be possible for our Maker to review the many points in our history when the seductive power of a woman’s blonde tresses drove the civilized world mad. The most recent such entry is time-stamped as follows: “December 16, 2007, Cowboys-Eagles, 13:38 Remaining in the 2nd Quarter.”

That’s the exact time at which Jessica Simpson—theretofore known only as a vapid, voluptuous, harmless Dallas-bred pop tart—made her power known. Clad in a white Tony Romo jersey with a pink No. 9, her image was shown to a national television audience as the American football announcers discussed her burgeoning romance with the Dallas Cowboys’ quarterbacking lothario. What happened next may seem insignificant, even common—Flozell Adams committed a false-start penalty—but in truth the lasting image of her from that game set in motion cosmic forces we are only now beginning to understand.

In essence, her second-quarter performance proved the nonpareil power of her blondeness. That day, Jessica Simpson assumed the crown of The Quintessential Dallas Blonde—and thus became the most influential, enviable, remarkable woman of our time.

How is this possible? How can someone who once compared the smell of barbecue sauce to “chicken farts” be our modern Helen of Sparta? Is Jessica Simpson’s face, hair, or ample cleavage capable of launching a thousand ships? For our answer, we must further examine that moment when the appropriately named FOX cameras caught Simpson tugging at her jersey, staring into the nation’s collective eyes, and screaming “woo.”

For context, consider the history of the blonde as international seductress. The first such woman we do not know by name, but we estimate she came into existence some 11,000 years ago. That is when, owing to the Ice Age’s scarcity of men and the need for women to stand out as potential mating partners, a tectonic shift in pigmentation occurred, and the first fair-haired vixens sprang up in Northern Europe. In modern times, names were attached to these legendary, divisive blondes: Mae West, Marilyn Monroe, Jenna Jameson.

All these women fully understand the power potential of a blonde. The sexiest blondes represent all things to the adoring, slathering male populace. They can seem angelic and virginal, then, with a twirl and flip of their hair, they become wicked and sultry, the original good girls gone wild.

Until that fateful day last December, Jessica Simpson had displayed few of these qualities. True, the many iterations of her persona had elements of the above traits, and her singing and television careers had garnered her a certain level of fame. But these personalities—Church Choir Jessica, Virginal Jessica, MTV Jessica, GQ Jessica, Divorced Jessica, BFF w/ Christina Applegate Jessica—in no way prepared us for the overwhelming sensuality she and her hair would loose upon the world once they coalesced into the woman we now know as Yoko Romo. 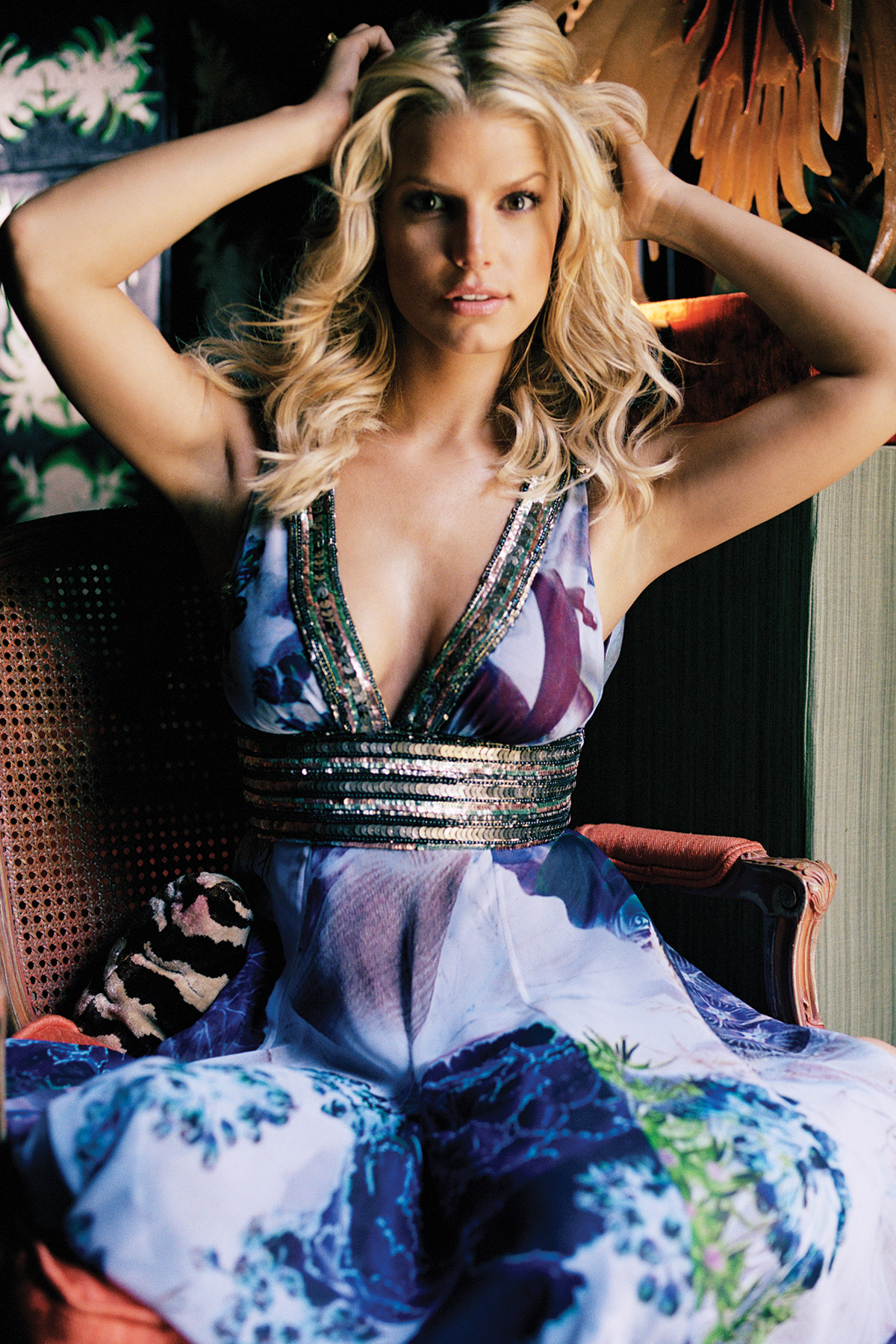 Yes, she’d taken the occasional swim in Lake Hotness, especially during her big-screen, bikini-clad romp as Daisy Duke, but never for a period long enough to justify calling her our modern blonde Medusa. Until then, we’d never longed to tame the golden snakes in her head.

Remember, if you will, what she looked like when you first saw her on your television, split-screen with the quarterback of America’s Team: wide eyes, outlined in war-paint levels of mascara; soft, pale, pouting pink lips; freakishly white teeth. None of these features is what captivated the world. And it wasn’t her enormous silver loop earrings or her black Charles Nelson Reilly-sized sunglasses resting atop her head that transfixed the masses.

It was that hair. Not just its hue (that of aurulent, honeyed silk, if such a fabric were colored once every two weeks), but its bounce, its curl, its joie de vivre. It was hair that just got out of bed after a long night of lovemaking. It was hair that framed a face unaffected by fame, confident and calm no matter the harshness of the spotlight’s glare. It was hair resting on enormous boobs.

It was then that she became what all men wish for, what we have always desired: the mythical blonde she-devil, tawdry and flaxen, coquettish and golden, a wicked angel ready to teach us sinful delights.

The problem is, of course, that men can’t handle the power of a blonde woman in full. Tony Romo had his worst game of the year that day, and those of us who care for his well-being, as well as those of us who bet big on the ’Boys and gave the Eagles points, were understandably angry that she distracted her boyfriend, the nation, and beyond.

Now, though, we see it was inevitable. Her power was growing. She was in Dallas, after all, which is not only her hometown but also where you can find the throne reserved for the prettiest young big-haired blonde around. It is here where the quintessential blonde, from Bonnie Parker to Candy Barr to Morgan Fairchild, is crowned.

Now Jessica Simpson is our latest member of Dallas Blonde royalty and, by extension, the most powerful blonde Jezebel in the universe. She should know that others will mock and belittle her for this. But so what? Outside her palace, the Queen of England is made fun of, too. That does not diminish the reach of her domain. And she’s not nearly as hot as our Jess.

We in Dallas, then, should embrace Her Majesty, Jessica Simpson. For her hair defines not only her—it defines our city. If that drives you mad, so be it. That’s what blondes do.

A Social History of the Dallas Blonde