Alberto Lombardi sits at a small table next to the kitchen in his newest restaurant, La Cubanita, surveying the scene as the staff readies for the lunch rush. He is a handsome, well-dressed Italian in his late 50s. His face is deeply tanned. His mouth arches into a seemingly permanent soft smile. Loud Latin music pulsates, a bartender muddles fresh mint in a tall glass, and the waiters, dressed in traditional pink and blue guayabera shirts, busily set tables. In the midst of the organized confusion, Lombardi remains still, meditating in the moment.

The dining room is designed to resemble one of the splendid restaurants that once graced the squares of Havana in the 1950s and now sit in various states of disrepair thanks to Fidel Castro, who marched into the city in 1959 and put the kibosh on glamour.

Lombardi has been a member of the ruling class of the Dallas restaurant scene for nearly 30 years. But he didn’t just march in and take over. He started at the bottom.

After many years of working in some of the finest restaurants all over Europe, San Francisco, and Miami, Alberto Lombardi found himself waiting tables at The Grape in 1974.

It didn’t take him long to get back into the fine-dining scene. He landed a job at the Fairmont Hotel, where he managed the Venetian and Pyramid rooms, which, at the time, were Dallas’ premier dining and entertainment venues.

In 1977, Lombardi stepped out on his own, opening Lombardi’s, a low-key Italian spot on McKinney. The restaurant was an instant hit. With a loyal following, he eventually inched his way back up the fine-dining restaurant scale by opening Le Rendezvous, Lombardi’s Trattoria, and Lombardi Mare, the beautiful seafood-centric restaurant in Addison where Lombardi greeted guests by name and with air kisses to both cheeks. Business boomed. Until September 11, 2001.

He closed Lombardi Mare and changed with the times. “There is an evolution of food, like everything else,” he says. “You need to reinvent yourself all the time. You need to keep up with what’s going on.” 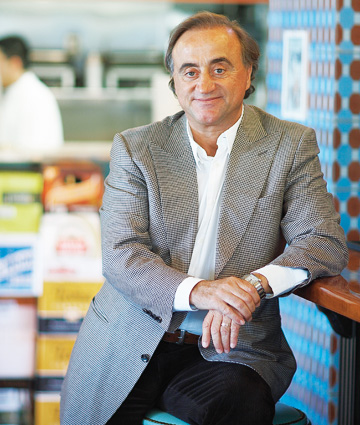 Alberto Lombardi photography by Kevin Hunter Marple
photography by Kevin Hunter Marple
In an attempt to do just that, Lombardi has been vacuuming up real estate in the Knox-Henderson area and opening small, neighborhood-friendly bistros. While each restaurant has a different name and cuisine, the business plans are the same: good service, affordable prices, charming and cozy interiors. Although he is serious about food quality, Lombardi has smartly adapted ethnic food to fit the Dallas palate.

By that I mean: don’t go to La Cubanita expecting to find a menu filled with truly authentic Cuban dishes. My friends who have lived or traveled in Cuba insist we wouldn’t want the real deal. As the name implies, it’s a little bit of Cuba combined with a variety of modern Caribbean flavors and ingredients. It’s Ricky Ricardo’s version, not Castro’s. Call it “sitcom Cuban.” On the TVs over the bar, they even show reruns of I Love Lucy.

La Cubanita is open for breakfast, lunch, dinner, and late dinner, serving until 3  am. The menu is full of appetizers, soups, salads, sandwiches, and specialties of the house. And cocktails. Especially mojitos, made with fresh mint, cane sugar, white rum, and fresh lime juice, served with a frozen stick of sugar cane.

Appetizers sound better than they taste. Croquetas, the Cuban version of the hush puppy, were filled with shrimp and chorizo. Once we bit the crunchy exterior, the interior spilled out in a gooey mess. Black bean soup was tasty, but too watery (a few spoonfuls of rice would have been nice). Only the twice-cooked plantains tasted authentic, in the opinion of one experienced Cuban diner. “Yep, they taste just as bad here as they do in Cuba,” he said.

Sandwiches were also disappointing. A Cubano with pulled roast pork, ham, pickles, Swiss cheese, and mustard pressed between two slices of Cuban bread was good, but not outstanding. The bread wasn’t crusty, and the mustard was Dijon, not French’s. Lombardi is still tooling with the bread and is even thinking about opening his own bakery to perfect his baked products.

However, the specialties of the house are special. The churrasco, a marinated skirt steak, was served medium with a spicy Caribbean slaw and delicious yucca fries. Arroz con pollo was a huge portion of saffron-scented rice filled with chunks of chorizo, green olives, and capers, topped with four tender pieces of chicken.

Stopping in to La Cubanita for an eye-opening meal is a treat. The breakfast tacos are filled with scrambled eggs, chorizo, sofrito, and cheese. But for those looking for a real pigout, the Picadillo Cubano is a must—a plate filled with beef hash covered with poached eggs topped with hollandaise and sweet plantains on the side.

All in all, dining at La Cubanita is as charming as Alberto Lombardi himself. In fact, I think Ricky Ricardo would be comfortable dropping in after a long night at The Tropicana Club.