The name on the door of this swank new celebrity-chef restaurant in downtown Dallas may say Charlie Palmer at The Joule—but it has inadvertently become the House of Drew.

That would be Drew Hendricks, recently certified a Master Sommelier, and an attentive front-of-the-house guy, too. His passion for wine and zeal for finding the right pairings are contagious. That he has emerged as the unwitting star is partially a function of the busy schedule of Palmer, who lives in Northern California and juggles a portfolio of 12 restaurants. But it’s also indicative of Palmer’s laid-back confidence. He’s the best kind of boss in that he hires good people, offers some direction, and then lets them do what they do.

The other star at Charlie Palmer is chef Scott Romano, who worked at Aureole in New York and at the more casual Kitchen 22, where he got an early glimpse of Palmer’s desire to break from the formal atmosphere of Aureole.

With these two in place, it didn’t matter quite so much that the servers weren’t up to speed. Some appeared to be real novices, although fresh faces are preferable to the same crew of mercenaries who hop from new place to new place.

But there are mostly things to love about Charlie Palmer. It has a kind of assertive masculine energy, evident in its decor. Located on the ground floor of the former Dallas National Bank, which is currently being renovated by oilman Tim Headington into the boutique Joule Hotel, Charlie Palmer has an enormously welcoming atmosphere, with silks and wood in browns and tans. Huge propellers in the 90-seat dining room’s ceiling spin ever so slowly, creating a retro-modern vibe.

This sounds like a weird thing to say about a restaurant, but Charlie Palmer is intelligent. It has steaks without the dumb swagger of a steakhouse. It has whimsy. Just look at the amuse bouche: a lobster corn dog, maybe two bites, consisting of a lobster chunk wrapped in the familiar deep-fried cornbread crust and served on a stick with mustard crème fraîche. It acknowledged our history with corn dogs while elevating the form with a high-end filling. Genius. 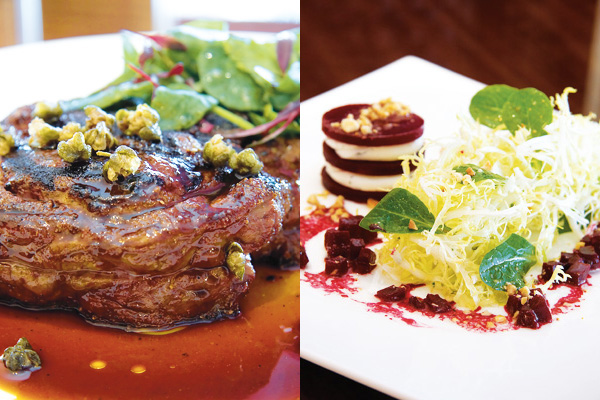 Bison steak (left) and beet salad (right). photography by Kevin Hunter Marple
photography by Kevin Hunter Marple
The small menu of tweaked-up American was easy to absorb: starters on the left, main courses down the middle, sides on the right. Palmer’s golden-tongued explanation is that he’s giving people “freedom” to order what they want, rather than having to accept a side dish designated by the chef. In a way, that sounds like you’re getting conned out of your complimentary rice pilaf, but restaurants at this level hardly give you sides for free anyway, and most of his entrees do come with some kind of fillip.

With the exception of the desserts, which were average at best, nearly everything excelled. At the top of the list: the bison steak, a stunning grilled slab two inches high, its edges blackened from pepper and char, and its center red and juicy, with a perky watercress salad on the side. “This is the best bison I’ve had,” I heard one diner declare. I’d take it over a steak any day, especially since bison is so lean. Preparing lean meat is dicey, but the kitchen gave it the very best treatment by crusting it heavily and cooking it lightly.

Another restaurant up-and-comer is tagine, the Moroccan stew made in a conical clay pot. At Charlie Palmer, they remove the pointed tagine lid at the table, so be ready for a splash. Inside was a pheasant breast, fork-tender, with the palest hint of pink in the center; truffle nage, its poaching liquid, added perfume as well as flavor.

They’re using the almost-hackneyed Wagyu beef—known as the American version of Japanese Kobe—but in a guise that’s new: Wagyu flatiron steak. This more rustic cut made the most of the Wagyu’s tenderness and fat; in a higher-end cut, it sometimes feels flabby. 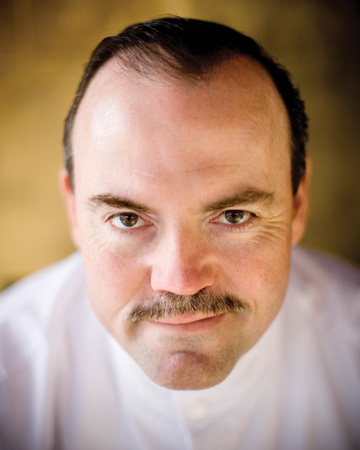 Uber restaurateur, chef, and hotelier Charlie Palmer. photography by Allison V. Smith
photography by Allison V. Smith
The staff hypes the Diver sea scallops, but after the bison thrills, they seemed almost dull, despite their nifty crust and sprinkling of lemon confit, cauliflower, and artichoke pesto. Other fish items were more exotic: a stuffed trout with chorizo-wild-mushroom hash and seared striped bass with “melted” sweet onion and mushroom soy.

Side items were big enough to split between two to four diners. A vegetarian could easily make a meal by pairing two or three of them.

Starches ran from novel—quinoa with dried fruit—to traditional steak fries, served in a stainless crate with slots for ketchup and bernaise. They’re big on mushrooms, such as the cremini with oxtail ragout. But veggies were best, from baby bok choy in brown butter to Brussels sprouts sautéed until their edges were crisp.

Starters included a cool-looking version of the standard beet-and-goat-cheese duo that stacked beet slices with goat cheese in a precise napoleon, like a mile-high purple Oreo, set off by a gnarly tangle of greens on the side. Artisan salumi uses meats cured in-house, seen hanging in a frosted-glass chamber that’s visible in the dining room, and truly, it was good. The killer salumi plate at Nove, however, has ruined all others.

One more thing to love: Next Vintage, a glass-enclosed wine shop next door. Inventory includes wines served at the restaurant, stocked and staffed by the sommelier team of Brandan Kelley, formerly of York Street, and Hendricks, so you know it’ll be good.