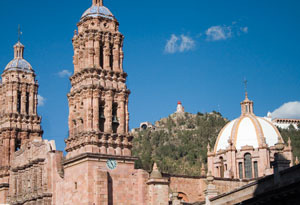 The magnificent Cathedral on Plaza Hidalgo. photography by Jen Maki
photography by Jen Maki
NEW FIND: We’re familiar with vacationing in Puerto Vallarta, Cancun, even San Miguel, but how many people have you heard talking about their trip to Zacatecas? This colonial gem, less than an hour plane ride north of Mexico City, is more than just a picturesque town nestled in a tiny valley and against the backdrop of the purple Sierra mountains. It’s a trip back in time: elaborate 16th- and 17th-century buildings with intricate wrought-iron balconies, ornate fountains, and historical monuments line the steep, narrow, cobblestone streets. SILVER HISTORY: Zacatecas rose to prominence with the discovery of silver in 1546, becoming one of the most influential cities in New Spain. The influx of wealth from the mines gave rise to many splendid cathedrals and residences constructed of rose-colored volcanic rock. The most stunning example—and the crown jewel of Zacatecas—is the Cathedral, a UNESCO World Heritage Site, renowned for its ornate facade done in churrigueresco style. Scattered throughout the town are other landmarks, including the El Cubo aqueduct and the nearby San Pedro bull ring, now part of the Quinta Real hotel. HIGHWAY TO HISTORY: If you really want to time travel, rent a car and take the 45-minute drive to the ruins at La Quemada (“the burnt place”). The multiterraced pyramid, ball court, and citadel were constructed beginning in 300 A.D. with slabs of rhyolite extracted from a nearby hill. The Hall of Columns, 11 brick columns about 15 feet high, stand in rows surrounded by the remains of once-impressive walls. At its peak, this was one of the largest roofed buildings in Mesoamerica. TO SEE & SHOP: Zacatecas is an unexpected art treasure trove, with several world-class museums. The Rafael Coronel Museum (Ex-Convento de San Francisco), located in a 16th-century monastery, has a collection of more than 5,000 colorful masks, highlighting the artistry of Mexican craftsmen throughout the ages. The Pedro Coronel Museum (Plaza de Santo Domingo) is home to original works of many famous artists, including Miró, Dalí, Picasso, and Goya, along with works from Mesoamerica, Hellenistic Greece, Africa, and the Far East. The adjacent Elías Amador Library (Plaza de Santo Domingo) holds an impressive collection of first-edition books dating back to the 16th century, including a first edition of Cervantes’ The Man from La Mancha. The platerias (silver shops) downtown and in the mercado next to the Cathedral sell the city’s trademark souvenir: anything cast in silver. You’ll also find shops selling handmade gifts, such as beaded figurines made by the Huichol Indians.

MUST DO
After a day of exploring dusty ruins, retreat to a luxury suite at the Emporio Zacatecas. You couldn’t ask for a better location, as it sits right across from the Government’s Palace in the historic district in the center of town. Ask for a room with a view of the Cathedral.

HOW TO GET THERE
American Airlines and Mexicana Air fly to Zacatecas via Mexico City.

Have Tote, Will Travel