Avner Samuel is a fiery, tempestuous, crazy genius. and while he may easily mince vegetables, he’s frank about his own insanity. “All chefs are madmen,” he says. “We are artists. We express ourselves through our emotions.”

Over the past twentysomething years, Avner’s emotions have been as much a part of his story as his culinary creations. From his glamorous days in the kitchen at the Mansion on Turtle Creek to his string of restaurants—Okeanos, Bibendum, Ethniko, Lombardi Mare, and Bistro A, to name a few—he has taken plenty of prisoners during his career of opening, closing, and consulting on countless restaurants.

Then he opened Aurora in 2003, his elite eatery on Oak Lawn Avenue, dedicated to redefining fine dining in Dallas, a lofty goal that he did indeed achieve.  The madman seemed content in his gilded asylum. His long-term business plan pointed toward Las Vegas, on a long slow simmer.

When I learned that Avner was opening not one, but multiple Urban Bistros, I quivered. How could he be in more than two places at once? He’s tried before with Cafe Med, a short-lived (and much missed) concept in Preston Royal. His emotions boiled over the phone line. “I’ve reached a point in my life where I just have to go for it,” he says. “It is my time.”

Within three months, he opened two locations of Urban Bistro, a lower-priced Mediterranean spinoff of his once popular, but now defunct, Bistro A. Four more—Southlake, Frisco, Fort Worth, and Coppell—are in the works. Without taking a breath, he says he’d “like to look at Austin and Houston.”

He is certifiably nuts.

I’m no restaurant business analyst, but it seems a bit impulsive to open a second location of a restaurant before you’ve proved the numbers on the first. And, according to Avner, he went “way over budget on North Dallas” before it opened in late November. I’ve seen him twice at Urban Bistro (he overlooked me), and both times he was running through the dining room on a cell phone, shouting orders, taking meetings. He never greeted a table or worked the room. He was all business.

His plan is to create the perfect neighborhood restaurant with “humble prices.” “We’re sticking to the idea that you can come three times a week and it will cost less money than cooking in your own home,” he says.

That may work at the original location in the old Riviera/George space off Inwood and Lovers, a chip shot from the pocketbooks of Park Cities. But Avner’s “humble” price point—lunch entrées range from $10.95 to $19.95, and dinner from $16.95 to $24.95—might not play in North Dallas or Southlake. Recently, dinner, including two appetizers, two entrées, a $50 bottle of wine, and one dessert, came to $142. That’s a lot of groceries, even if you shop at Whole “Paycheck” Foods. 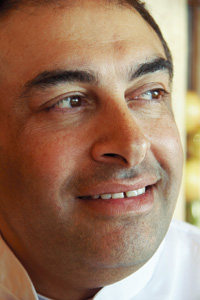 ALL SMILES: Avner Samuel looks to the future with Urban Bistro. photography by Vanessa Gavalya
photography by Vanessa Gavalya
The good news is that the original Urban Bistro is feeding off the energy generated by the intersection of Inwood and Lovers. Once Dallas’ prime fine-dining destination, the area has come back to life, and Urban Bistro fits nicely with the other “indies” already in business: Iris, Cafe Italia, City Cafe, Bijoux, Rouge, and Shinsei. Now, almost any night of the week, you’re likely to spot something very non-North Dallasy—cross-pollinating pedestrians.

Whole red snapper is superb, fried to a gentle crisp and bathed in a reduction of chicken broth and white wine and topped with tons of fresh parsley and diced tomatoes. Gambas tagine with Moroccan spice is a dish you’d like to snuggle up to when you’re feeling insecure: a rich saffron, turmeric, and cumin-scented sauce filled with strings of spaghetti squash centers your senses.

And lamb. You haven’t eaten lamb unless Avner has prepared it for you. At Urban Bistro, he offers it two ways—cumin-rubbed chops or braised with pumpkin seed risotto.

Details? Whatever money they saved on the sparse finish-out—the walls are thick stripes of antiqued gold and beige highlighted with a garish horizontal mirror—they put into the food. Tiny niçoise olives burst through potato gnocchi; pine nuts are roasted just right. A Parmesan croquette here, a fig glaze there.

He’s a culinary genius, but can Avner do it all? He’s already replaced opening chef Roger Cob with Simon. “Simon who?” I ask.

As is Avner’s wife, Celeste, the key to his success at Aurora. And, according to Avner, so are his partners. “Who?” I ask.

“I don’t want to talk about it,” he says. “They’re not interested in being splashed in the media.” A quick Google search turned up Josh Lankford and Mark Lindberg of Lankford Media Group as his backers. “Basically Celeste and I are left alone to do what we do best, and they trust us. We find the location, we sign the lease, we get the liquor license. I just need to place a phone call for the money.”