Dean Fearing is currently the most famous chef in Dallas, lauded nationally and beloved locally. But I haven’t always been a Dean Fearing fan.

When I moved back to Dallas in the early ’90s, Fearing, the high-profile chef at the Mansion on Turtle Creek, was at the height of his culinary career out of the kitchen. He was in the first wave of “celebrity chefs,” and he spent a majority of his time taping TV shows, doing personal appearances, and signing books. Rumors of disgruntled employees wafted from the Mansion kitchen. Wearing a spotless apron, Fearing made obligatory rounds of the tables at the Mansion, lapping up all the glory, but chef Amador Mora, now at Trece, and the rest of the kitchen made the magic happen on the plate.

I watched the local dining scene evolve thanks to chefs like Avner Samuel and Stephan Pyles and Kent Rathbun—chefs who worked hard and continued to create innovative dishes while Fearing rested on his tortilla-soup-and-lobster-taco laurels. My opinion of Fearing lessened.

Odd that the person who would begin to change my opinion was a real estate developer.

Denny Alberts is the former president and chief operating officer of Crescent Real Estate Equities Company, the developer of the Ritz-Carlton project. Besides the lofty title, he is also a longtime friend of Dean Fearing’s. Alberts wanted Fearing for the Ritz’s new restaurant, and when he waved his magic wand, Fearing left the Mansion to open his $6 million fairy-tale dream, Fearing’s Restaurant.

Then, an even stranger thing happened. Dean Fearing, the original rock star chef, tackled the project like the hard-working pro I didn’t think he could be.

His first agenda was designing a restaurant like no other in Dallas. He envisioned a space with multiple dining areas, each with a different style. Fearing worked well with the designer, Bill Johnson of Johnson Design Group in Atlanta. “He’s an old hippie and I’m an old hippie,” Fearing says. “We knew we had to do some Mansion white tablecloth stuff, but I wanted to do a clean, glassed-in room like a restaurant I visited in Lake Como, and I wanted paneled walls in another space, and I wanted the whole place to have a timeless feel.” Somehow, the two managed to put all of their pipe dreams together under one roof. 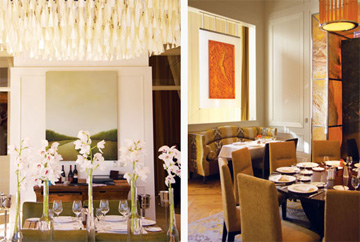 (above left) The view from Table 242 in the Sendero Room. (above right) Casual dining available outside the Rattlesnake Bar. photography of Kevin Hunter Marple
photography of Kevin Hunter Marple
Fearing then made another startling but important decision: he hired most of his key staff from outside of Dallas, a move that raised ire among available local talent. “So many people asked me why I didn’t hire local people,” Fearing says. “You can only imagine, 21 years at the Mansion with all of those people. I mean I love them to death, but it was 21 years, and it is now so nice to be around new trains of thought and ideas. Now I won’t have to be the only one thinking.”

Or, more important, the only one cooking. His chef de cuisine, Joel Harrington from the Ritz-Carlton Laguna Niguel, is the main man in the kitchen and his apron is always dirty.

Fearing even imported a maitre d’—a huge risk given how movers and shakers demand instant recognition and the best tables. He picked Alex Aland, a 28-year-old former assistant manager at Hali’imaile General Store, a popular spot in Maui. Aland sports thick-rimmed black glasses and roams the dining rooms in a baggy suit. Chances are he would have been denied a table if he had walked into the Mansion in the late ’80s.

“Alex doesn’t know the VIPs,” Fearing says. “And the VIPs don’t know Alex. They’re gonna have to get to know each other.”

So far, the results of his bold moves have been successful. “I’m seeing a crowd I’ve never seen and would have never gotten at the Mansion,” Fearing says. “Like a guy in a t-shirt ordering an $850 bottle of Chateaux Haut Brion without looking sideways.”

The Scene
Despite what I think about Fearing or his restaurant, the place is going to shoot Dallas onto the international culinary spotlight. Texas hospitality is “in,” and Fearing’s delivers plenty of it.

And, honestly, isn’t that what we in Dallas really care about? We don’t want the latest European fancy-pants-bells-and-whistles delicacies (or foam) on our plate. We want a nice meal in a flashy atmosphere with an upbeat, down-home, local superstar chef who knows your name—no jackets required, price no object.

No chef in Dallas does big and sassy better than he does. Fearing’s charm extends way beyond the kitchen. Other top chefs in Dallas with less refined people skills would give their family secret recipes for an ounce of Fearing’s charisma. One former Mansion kitchen alumnus said, “When his sunlight is beaming down on you, you feel great. He has that transformative thing.”

Have a seat in the luxurious new digs of Fearing’s and before you can say “lobster taco no more,” chances are Fearing will have already stopped by your table and patted you on the back.

Despite the elegant surroundings, this is not “fine dining.” His new mantra is “no rules!” The food is “Elevated American. Global! No borders!” Fearing’s is a finer dining free-for-all. Wear jeans! Ask the chef to make anything. He’s at your service. Y’all eat anything you want anywhere in the restaurant! Giddy-up!

Anywhere you want? What does that mean? Well, you can choose to dine in one of seven rooms, each with its own distinctive vibe.

Feeling sexy? Reserve a table in the Sendero Room, a glass dining pavilion with floor-to-ceiling doors that open to allow cool Texas breezes to set off the twinkle of hundreds of hanging strips of Murano glass dangling from the chandelier above.

Need a good people-watching fix? Have a seat in the warm glow of honey onyx in the Rattlesnake or Lobby bars and nosh on a plate of lobster nachos ($22 for six). It’s the hottest bar scene with the stiffest pours in town. There’s also an outdoor verandah with comfy couches around a pine-burning fireplace. If you want to get gussied up and impress a date or a boss, choose a table in the elegant Gallery, a white tablecloth, fine dining room. Feeling a little more laid-back? Have a seat under the rawhide chandeliers in the open Kitchen area where they set up a row of the best two-tops and four-tops in town. Ego need a boost? Reserve the elevated chef’s table for the ultimate Dallas dining experience: it puts you a notch above your fellow diners.

No matter where you sit, you’re front-row center, and Fearing is the dashing ringmaster, always up close and personal. When he snaps the whip, servers, busboys, and kitchen workers risk their lives on the high wires to make him happy. 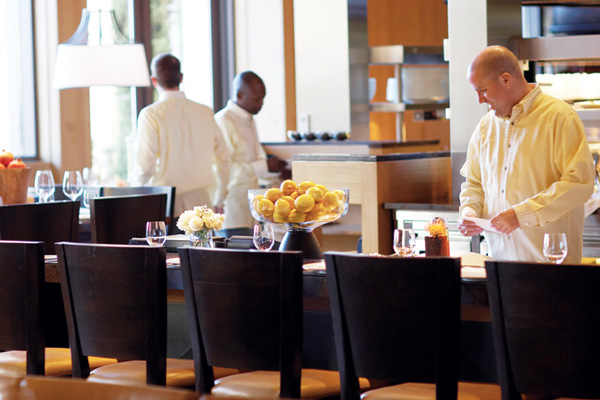 The Food
He snapped it hard the first night we dined. Six weeks after the restaurant opened, the place was a real circus.

We sat at table 242, on a gorgeous forest-green leather bench seat facing a large open space and a beautiful painting of a trail winding through the woods. From our post we could see both entrances to the room and the waiter’s station below the painting. At first we didn’t mind sitting for 15 minutes without a nod, because it was amusing to watch the servers, sommelier, managers, and hostesses rushing around and bumping into each other like characters in a not-so-silent Charlie Chaplin film. One dropped a tray of martini glasses and four silver shakers as he tried to dodge a busboy. Booze, ice, and glass scattered across the floor. Two women returning from the bathroom didn’t seem to mind: they giggled and wobbled arm-in-arm across the crunchy mess, which the staff hurried to clean.

Poof, Fearing appeared at the table next to us. “Hi, I’m Dean,” he said to the foursome. “If there is anything I can do for you, just let me know.” His voice was hoarse. One look at him told the tale—he was exhausted and running on fumes. I felt sorry for him when one of the guys at the table launched into a series of mishaps that had taken place at their table throughout the evening.

Fearing stood in a daze with a wide smile frozen on his face. He listened to their complaints, then turned to a group of servers who huddled around him. Quietly he called the play, and within minutes complimentary drinks and desserts were delivered. All was well.

We indulged in the familiar. The shrimp taco, Fearing’s replacement of his famous lobster taco, is destined to become a new Dallas classic, specifically because the shrimp is slathered with barbecue sauce made daily in the kitchen of the original Sonny Bryan’s on Inwood. Fearing’s tortilla soup is, well, Fearing’s tortilla soup—rich broth poured over bits of chicken, avocado, and fried tortilla strips. The “surf and turf,” a pan-roasted spiced filet served next to chicken-fried Maine lobster, was subpar. Ordered medium rare, the steak was served well done. The lobster bites were a bit on the doughy side, the breading adhered to the lobster when you cut it, but it separated into paste once it hit the mouth.

Personally I don’t think lobster should be chicken-fried, but when I brought this issue up at a later interview, Fearing made me eat my words. “Yes, I did it at the Mansion,” he says. “And when [John] Tesar [the new Mansion chef] took it off the menu, I said, ‘Too bad, buddy boy, that’s a half a million dollars right there.’ I’ll take it.” In other words, Fearing’s Texas-chic surf and turf sells, big time. 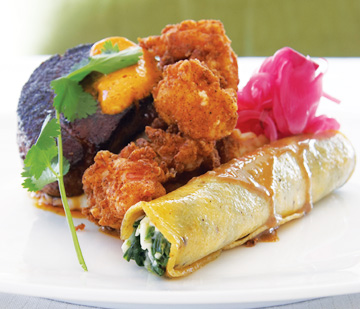 The aforementioned lobster nachos are not worth the $22 price tag, and neither are the crab cakes, five quarter-sized discs for the same price. The garlic-basted chicken breast was overcooked on two visits, and the service always started off slow. We heard or witnessed dishes dropping every time. However, the crust of the pan-browned halibut gave way to a moist, flaky fish that I could eat every week, along with the pork tenderloin glazed with rosemary mustard. And my hard-to-please steak expert fell for the prime rib-eye mopped with molasses, beer, and vinegar. It’s pure Texas taste on a plate.

The Success
Eight weeks after opening, the sales numbers are astounding. According to Harrington, “Lobster is flying out the door.”

In the month of September they sold 1,100 shrimp tacos and 1,484 surf and turfs during the dinner hours. “Lordy, we’re bringing in 120 pounds of Lawton, Oklahoma, buffalo a week,” Fearing says. “These are the same numbers we were doing at the Mansion in the late ’80s.”

Despite the early returns, Fearing and his dream team are under extreme pressure to perform. The restaurant was open about a month before Esquire magazine’s food critic, John Mariani, named Fearing’s the “restaurant of the year.”

In the entire country.

How does that happen? How does a restaurant, no matter its chef’s reputation, get recognition like that in its first few months? It’s like awarding the Super Bowl trophy to a team in the preseason. It’s not fair to Fearing, the restaurant, or the paying public. Expectations are immediately set at an impossible level.

Again, how does that happen? It’s not because Fearing’s serves the best food in town. Or the most innovative cuisine.

It’s because Dean Fearing, when he’s working hard in the kitchen and on the floor, puts on the best show in town. And that’s all Dallas really cares about. Right?