When I first visited Park Cities Prime, one of Dallas’ newest steakhouses, I already had a good working knowledge of what it takes to make a great steak and what Dallas desires in its meat. You sent those damn Yankees at Smith & Wollensky back to New York City because you didn’t care for their dry-aged steaks. No, you prefer the tender, purplish pink Prime wet-aged beef marbled with veins of fat that make a flavorful and juicy steak.

But after three trips to Park Cities Prime and some meaty research in between, I’ve gone way beyond working knowledge. Now I’ve earned a PhD in Prime. Following are the CliffsNotes of my lessons. Pay attention.

For starters, Park Cities Prime is owned by Stevan Hammond, who has owned Popolos Cafe at Preston Royal Shopping Center for the past seven years. He’s taken his formula for creating a great neighborhood haunt—a U-shaped bar surrounded by drinkers and diners, live piano music (Norah Jones played her first pro gig at Popolos), and charming servers who make you feel at home—and applied it to Park Cities Prime. He transformed the worn-out interior of Jenny Ho’s Szechwan Pavilion into a guy-town steakhouse replete with warm tan tones, dark wood paneling, smoky antique mirrors, and leather banquettes. Downstairs, the entryway is paved in natural slate and framed with Austin stone columns. The bar has a unique “chill rail” that keeps martinis cold from first sip to last and a huge high-def TV tuned to the Mavs or Stars. Bring on the lap dancers.

Oh, I forgot. We’re trying to outlaw those—again. How about a Caesar salad then? Or a wedge? I found both to be average. The Caesar smarted with lemon instead of anchovy, and the blue cheese dressing on the iceberg would play well in Peoria. But this is Dallas, where Prime beef rules. Steak eaters here are savvy to the bite and taste of a great steak, even if they don’t know exactly what makes it great.

Take the 22-ounce bone-in ribeye that was set before us on our first visit to PCP. It was cooked to our specs—medium rare plus—but after a couple of bites, the taste didn’t trigger the “Prime spot” in my taste memory. The exterior was brown, perhaps from a seasoning or a fire not hot enough to produce that appealing slight black char that gives way to a silky, pink center. Final assessment from the first round: service great, food average.

I reinvestigated a couple of weeks later. A steaming hot bowl of rich, dark orange lobster bisque with the scent of brandy was a pure delight (“The best in Dallas,” said the bisque addict at our table) and heightened our expectations for the evening. But, holy (lack of) cow! The huge bone-in ribeye from my first visit was a shadow of its former self. The $42 price was the same, but this steak was barely a half-inch thick and not 6 inches across. The exterior was still brown, and the meat was tough and chewy. The Colorado lamb chops were puny; the small round portions of meat (delivered cold) on the end of the bones were swallowed with one bite. But the extreme difference in the size of the steak had me curious. The next day, I called chef Lee Miller, formerly of III Forks, and left the burning question on his voicemail. I tried again a few days later. No reply.

So I set out on a mad mission to get to the meat of things. (Sorry.) And here is how I learned why only some Prime hits your P spot. 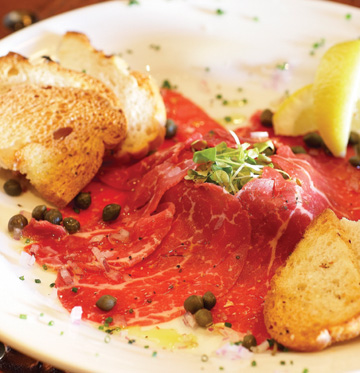 CHIC MEAT: A nice selection of appetizers includes thin-sliced Kobe beef carpaccio. photography by Kevin Hunter Marple
photography by Kevin Hunter Marple
I called PCP and ordered the aforementioned bone-in ribeye to go, while a friend picked up the same cut from Al Biernat’s. Three steak-loving aficionados met at a central location to compare them. This time the cut from PCP was huge, twice the size of the one delivered on our previous visit. Biernat’s beautifully charred entry, advertised as 2 ounces larger, was actually smaller. And that’s a good thing. The more marbling on the steak, the more shrinkage during cooking. The fat that melts into the meat creates a flavorful and tender steak. There was really no contest between the two. The PCP steak sat mostly untouched after our sample bites; we picked Biernat’s to the bone.

The next day I surveyed several meat purveyors and restaurateurs. In a nutshell: not all meat companies have a “tight relationship on their Prime side” with the meat packers. Some chefs use purveyors that “try to provide all things meat” instead of ordering the best cuts from companies that specialize in wet-aged Prime. If the Prime beef is not sufficiently wet-aged (under 21 days)—and a lot of it, including the meat at PCP, isn’t—it will undoubtedly have “more chew.” Erratic cuts are also “symptomatic of less-experienced butchers.”

Many upscale steakhouses in Dallas prefer  beef from the Midwest over Texas-raised cattle. Both can be graded Prime, a distinction that refers only to the amount of marbling (higher is better). But genetically speaking, cattle in the Midwest graze in a cooler climate and tend to be fatter. Texas cattle are cross-bred to endure the heat, which causes them to eat less and have less fat on their bodies. Each has a distinctive taste profile, which accounts for the variations in flavors and texture in restaurants around town. So, if you’re a persnickety beef eater, ask before you order.

As I was writing this review, I reached owner Stevan Hammond. “I hope you are not basing your review on our performance over the last month,” he said. “We’ve had a rocky start.” Opening chef Lee Miller is now gone, replaced by chef de cuisine Alex Aguilar from Silver Fox, in Grapevine. In the same conversation, Hammond told me how many high-profile Dallasites had claimed Hammond’s steak as “the best they’ve ever tasted.” An inconsistent train of thought that matched my up-and-down experiences.

Hammond assured me that other changes were taking place. I just hope he makes them fast, because a mediocre upscale steakhouse won’t make the grade in beef-savvy Dallas.