Chef de cuisine Kevin Maxey. photography by Kevin Hunter Marple
photography by Kevin Hunter Marple
Dallas, I’ve got a question for you. are you ready to support big-league fine dining on a regular basis? I’m not talking about hitting a high-end chophouse for a flashy $49 bone-in filet, a bold California Cabernet, and a pot of crème brûlée. I want to know how many of you are willing (or able) to pay $28 for chicken. A la carte. A protein that pairs nicely with a $13 side of hen-of-the-woods mushrooms. Did I mention the $45 lobster starter spiked with chervil microgreens?

You’ve heard the buzz about Craft Dallas, the high-concept restaurant on the bottom floor of the oh-so-hip W Dallas–Victory. It’s expensive, and, in the words of a prominent local restaurateur, “the valet parking sucks.”

But back to the chicken. Of course, it’s not just any chicken. These blue-blooded birds are reared “the old-fashioned way.” They run free over green pastures and beside the still waters at the Preferred Bird Farms just east of Dallas in Rockdale. Their path is righteous: at Craft, the birds are oven-roasted and served in a hot cast-iron pot bubbling with a dark pan-reduction sauce. Close your eyes for the complete religious experience. The moist meat yields gently against your teeth; the scents of grass and game dance across your taste buds. Heaven permeates your olfactory senses.

Colicchio’s cooking philosophy starts with an understanding of where foods are grown. His techniques—raw, braised, roasted, cured, sautéed—are basic. There is no fusing, no food cross-dressing. “It starts with respect for raw ingredients,” says Craft Dallas chef de cuisine Kevin Maxey. “We use a lot of local vendors and pay more to have the best ingredients flown in daily.”

Maxey, a native of Arlington who worked alongside Colicchio at Gramercy Tavern for four years, has obviously swallowed Colicchio’s Kool-Aid. With the exception of a half-cooked piece of halibut, all of the food I sampled at Craft was superb. The late-summer menu showcased the bounties of Texas: blueberries, peaches, heirloom tomatoes. The kitchen is industrious and staffed with a meat butcher and a fish handler. “We get in as many whole animals as possible in their least adulterated state,” Maxey says. “This allows us to prepare everything from terrines to cured products in our kitchen.” 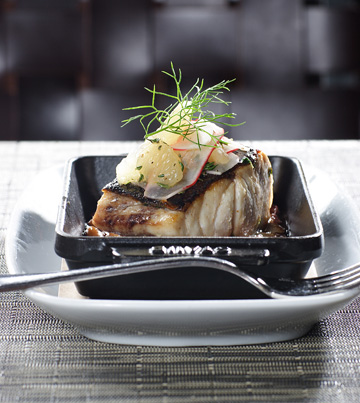 Virginia wild sea bass atop cranberry beans is served family-style in a cast-iron pan. photography by Kevin Hunter Marple
photography by Kevin Hunter Marple
Like the duck ham, a delectable salt-cured meat that is pressed into dense strips and resembles a gamier version of Italian prosciutto. Or the fresh bacon, a wiggly slice of braised, not smoked, pork belly fresh off the hog—what a thing of beauty. The vision fooled my senses: the faint taste of bacon combined with the texture of a pot roast. Smooth as foie gras, without animal abuse.

It’s no surprise that the lamb, like the chickens and hogs, has led a life of leisure. Only milk-fed lamb from the “free-roaming environment” at Summerfield Farms in Virginia comes out of the Craft kitchen. Maxey simply seasons the meat with preserved lemon, garlic, and rosemary, then roasts.

Really, besides the $10 valet charge and the long wait for your car (both of which are controlled by the hotel), the real challenge of dining at Craft may be the simplicity of the menu. You, dear diner, are responsible for assembling the taste profile of your meal. If you’re lazy, like most of us, you’re used to a chef providing the sides that complement your protein. At Craft, once you pick, say, veal sweetbreads, you must peruse the long list of side dishes. Let’s see, thymus glands and Japanese eggplant? I don’t think so. That’s where the service comes in. Extremely knowledgeable, the waitstaff can mix and match better than eHarmony. 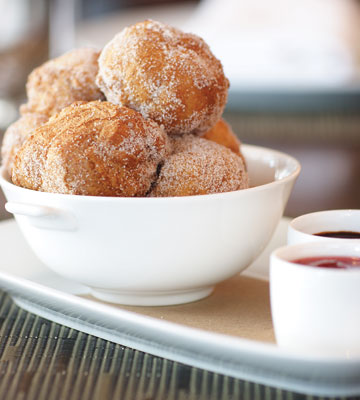 Beignets with Vietnamese cinnamon, homemade jam, and Valrhona chocolate sauce. photography by Kevin Hunter Marple
photography by Kevin Hunter Marple
As does Aaron Rodonis, the man behind the manageable 250-bottle wine list. On my first visit to Craft, our table of five ordered from all corners of the menu, which I thought would be a sommelier’s nightmare. “Family-style presentations do create a challenge,” says Rodonis, formerly of the Mansion on Turtle Creek. “Pairing can be more complicated, but it can be easier because the food is simple.”

Rodonis runs the service staff through daily tastings of his handpicked selections, most in the $80 to $100 range, defining the styles of wine and how they pair with the nightly offerings from the chef. “They aren’t trained to sell wine, but to listen and help the guest,” Rodonis says. “I pick well-priced, interesting wines and generally pair the country where the food comes from with a wine from the same country—wines that represent the food in its simplest nature.”

Simple? Yes. Expensive? You betcha. Worth it? I’d pick that chicken for my last supper.

At Craft, the real question comes down to this: glitz or gourmet? Which one will you pay for? When the scene is stripped away, when the cutting-edge glamour has dulled a little and Hotel Palomar and the soon-to-open Ritz are the shiny new places to eat and be seen, will you still shell out $28 for a chicken at Craft? In this city, where appearances count for so much, Colicchio is banking on the riskiest trend of all: no gimmick, just quality.