Perfect, Bijoux is not—though it does come close. Detail-oriented and ingredient-driven, this little bistro aspires to hit the top tier occupied by restaurants such as Aurora and Lola.

It doesn’t quite reach those heights, but no matter. It’s all about the determined pursuit, apparent in every fastidiously folded napkin, painstakingly polished fish fork, and carefully composed plate.

Part of its drive and attendant charm comes from the fact that its staff is so young, so earnest. Chef-owner Scott Gottlich is 31; his wife and partner, Gina, who manages the front and oversees the wine list, is 30. They’ve assembled a dedicated team who’ve joined up because they believe in what they’re doing, man. That sense of higher purpose and shared vision is palpable and helps soften the rough spots.

The best example of this involved the ritual of the flatware. Other restaurants change out your fork and knife between courses, but none do it with the perfectionist zeal exhibited here, in a ceremony that resembled an elaborate, if sometimes clumsy, ballet. Every new course unleashed a swarm of staffers dead-set on replacing your knife, whether dirty or not. (“We all polish when we first get in,” confided one server.) A meal at Bijoux guarantees at least three courses and possibly nine, so you’ll become well-acquainted with the flatware brigade. Bread plates and water glasses receive the same degree of scrutiny.

The food doesn’t get off easy, either. Beet carpaccio began, as it usually does at Bijoux, with a large white plate. Five wafers of beet, sliced micro-thin, were fanned out and overlapped to form a translucent purple, flower-like constellation. Arranged on top were three nubs of pristine white goat cheese, none bigger than a thumbnail. Dots of pale green mint sauce formed a symmetrical ring, offset by the deliberately random drizzle of 50-year-old balsamic vinegar.

It’s a scientific approach to food, leaving it to you to discern flavors, evaluate properties, and analyze interactions. Got that?

Gottlich, who patrols the dining room with the vigilance of a sentry, gained local notice during his two-year tenure in the kitchen at Lola, the revered foodie haven. He’s joined here by Lola alumni Edward Mendoza, his sous chef, and the capable Allasan Warner, who helps manage the dining room. 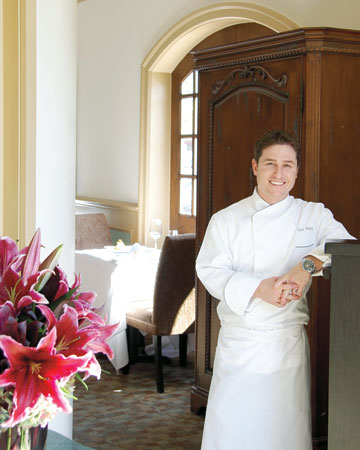 If not the nine-course, there’s a menu from which you can order three courses for $55 or five courses for $65. The lineup changes regularly, but you can expect to find pork belly, one of his favorites from his days at Lola, plus house-made pasta, filet of beef, and lots of fish. Bijoux could serve unofficially as a seafood destination: Gottlich flies in fish three times a week and offers out-of-the-ordinary options such as skate or Tasmanian sea trout.

He favors sensual textures, such as potato purée enriched with mascarpone cheese, which did wonders for a seared scallop, strewn just-so with a few grains of caviar.

Pork belly was a tale of texture, too, the shards of meat a contrast to its near-liquid fat and frothy topping of sharply flavored microgreens. Same story for the soft, melting veal cheeks, served one night as a tender brother to the filet of pan-seared beef. Soups, such as forest mushroom served in a wee tureen and topped with a smear of crème fraîche and cut chives, were pure and potent.
Bijoux goes the extra mile with a pastry chef, Morgan Wilson, who worked at Aubergine. Bakers tend to be a little nuts, anyway, and Wilson is easily as exacting as Gottlich, executing clarifying sorbets and tiny, precise apple tarts drizzled with flavor-packed essences such as cider gastrique.

Gina’s wine list strives to avoid the usual suspects in favor of crisp, affordable whites and smaller vineyards from France such as La Caussade. There’s a larger-than-usual selection of half bottles. It adds up to a wine list with a younger, fresher sensibility, a departure from the stodgy route of padding the list with big, pricey reds.

It’s easy to forget that this space was once a cheeseburger chain and, before that, a shoe store. For all of Bijoux’s youthfulness, the dining room feels staid, with its tan-and-brown scheme, conventional furniture, faux-brick archways, and wrought-iron accents. It’s as if they felt the need to “serious it up.” Those crazy, perfectionist kids.