If dinner is all you seek from Kitchen 1924, it fills the need capably with its small collection of homey dishes, some bearing a Southern twang.

But for some people, filling your stomach is not enough. That includes Kitchen 1924 owner Shawn Horne, who worked at half a dozen local destinations—Star Canyon, Abacus, Ferre, Green Room—before opening this solo venture in the middle of Lakewood, in the spot where La Dolce Vita used to be. An idealist, he’s out to create his own little slice of utopia, where every decision made is a “mindful” one: food that’s seasonal, furniture that comes from recycled materials, and a staff that operates in a collaborative mode.

He has a bit of the crusader in him. His tables are carved from a reclaimed bowling alley. He cut, stained, and shellacked the wooden menu boards himself, out of recycled wine crates. He retained many of the castoffs left by the previous tenant, the prize being the pizza oven, which is used to make an appetizer pizza and a cool breakfast pizza topped with egg and ham and served at Sunday brunch.

La Dolce Vita vets will recognize the gleaming black-and-white tiles that made the interior so distinctive, as well as the counter that forms an “S” curve along the wall. Horne added stools so diners can grab a bite and watch the staff in action.

As for staff, Horne bypassed the usual posse of servers that seems to float from one new opening to another, opting for a younger, fresher crew, who in many cases moved up from the second-string positions they held at previous employers. Among the waitstaff, this can occasionally translate into imperfect service, but it fits the jaunty, up-by-its-bootstraps spirit of the place. 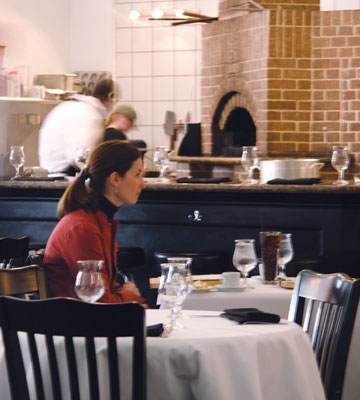 Among entrées, the talker was the pork carnitas, braised in Coca-Cola, a cousin of the old country favorite in which Coke is used to marinate brisket or ham. It wasn’t as if you could really taste the Coke, but the meat had a delectable shredded consistency, like pulled pork.

The irresistible dark horse on the menu turned out to be neither the more obvious beef tenderloin nor the cedar-planked salmon but the marinated flat iron steak. A tender piece of meat cut from the shoulder, it had good crusty edges charred black with a crimson center, as rare and tender as could be. Like all entrées, it came with a small, crisp mixed-green salad. Meat and salad make an excellent pair.

There were nearly as many sides as mains, some fairly novel, from mashed sweet potatoes to a tongue-in-cheek “pâté of the south”: a pimiento cheese ball, firm and flavorful, with thin crackers poking out like quills on a porcupine. Also two egg dishes, which you don’t see at every restaurant: deviled eggs and a gratifyingly thick three-egg omelet bisected by a sheet of melted Jack cheese.

Mixing it all up in an unconventional manner—a meal of side dishes, or sides plus appetizer—seems to be encouraged, especially considering the smaller-than-usual size of the entrées. The meats weigh in at about 8 ounces, which is what experts recommend for daily intake, but that can seem small if judged by the usual gargantuan restaurant standards. However, prices were correspondingly lower, with most entrées between $12 and $14. 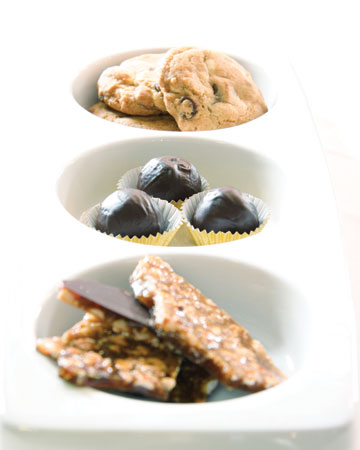 Wines were cleverly chosen, with an emphasis on the West Coast and a few entries from Australia, New Zealand, Italy, and France. The list eschewed the same bottles you see everywhere for vineyards whose novelty intrigued, such as the M5, a blend of five grapes from small Santa Barbara winery Margerum.

For all of its lofty goals, 1924—named for its street address on Abrams—can’t escape the earthbound challenges of life at a real restaurant. The pecan sticky buns, for example, touted as The Get at Sunday brunch (which starts at a very civilized noon, by the way), have been AWOL more Sundays than not. The kitchen still hadn’t found the right baking pan to obtain a consistently good result. Can utopia be found in the perfect sticky bun? It’s certainly nice to think so.