It’s pointless to get into a shooting match with the suburbs. (They’d lose! Ha. I kid.) But seriously, in the essential order of things, restaurants aren’t meant to flee Dallas for the suburbs. When it does happen, it’s especially vexing if the fleeing restaurant is one like Nicola’s, which, in large part, got short shrift while a Dallas resident. And when said restaurant, in its new suburban home, prospers beyond all expectations, it positively tears us up.

Check out that crowd at Nicola’s now, raising their glasses, trading their stories. And still more, waiting willingly in the bar (placed strategically up front to convey an instant conviviality). It was never like this in Dallas.

Then again, Nicola’s looks nothing like it used to. It’s just a blurry memory now, but Nicola’s used to be a milquetoast, a narrow strip of a restaurant crouched on the third floor of the Galleria, ill-equipped to handle the attention for which it ached. 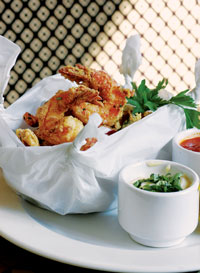 When it moved to Plano, it undertook a zealous makeover: muscle shirt, hair gel, the works. (We’re not bitter.) First, it grabbed an address in the hip Shops at Legacy, Plano’s answer to West Village. It expanded to 7,100 square feet with a mezzanine, sweeping staircase, and open kitchen. (You always get more space in the ’burbs.) It even went out and hired an interior design firm, Duncan & Miller, whose credits include Dragonfly and Hotel ZaZa. This Nicola’s has chandeliers, a hand-painted ceiling dome, and a wall of windows looking out onto the Angelika.

It has a bunch of cool new friends, too, including manager Max Heidenreich, of Abacus and Jasper’s, also at Legacy. Heidenreich, one of those can-do folks who’ll bounce from bussing a table to helping you choose wine, is personable and knows the Legacy scene. Nicola’s waitstaff follows his lead, if not quite with the same degree of driven precision.

The timing for Nicola’s is good, too, with authentic Italian blossoming into a local trend along with Taverna and Daniele Osteria. Nicola’s now has two native Italian chefs: Vicenzo Indelicato, who dates to the Galleria days, plus fellow chef Sascia Marchesi, a native of northern Italy whose beefcakey presence could get him a spot in a Brawny paper towel ad. He worked at Epcot Center in Orlando, Florida, where he did the kind of high-volume cooking Nicola’s has in mind.

When everything’s running at top speed, Nicola’s does great northern Italian. Alas, it commits the worst sin in the restaurant world: inconsistency. One visit can be fantastic, and the next time, so-so. Even its signature house-made pasta had ups and downs. 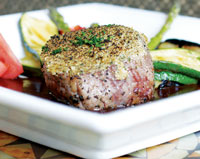 They make it in a variety of shapes: ear, twist, hollow tube, handkerchief. (If the servers smell a VIP at the table, they bring out a multitiered stand that displays the pastas, uncooked.) Fazzoletto alla Genovese, handkerchief pasta with shrimp and salmon in white wine and garlic, is one that came properly cooked. The shrimp and salmon jiggled just so, and the pasta was nicely al dente.

But the orrecchiette (“little ears”) with broccoli rabe, garlic, sausage, and pecorino cheese had a stubborn stiffness that would not bend. (And, by the way, undercooked pasta stays with you for days.)

Too bad. Had the ears been properly al dente (which cookbook author and New York restaurateur Lida Bastianich describes as tender, not raw-tasting, with a firm texture and a little “snap” at the center), they could have softened the sting of the broccoli rabe, sausage, and garlic, all dealt with too heavy a hand. There’s a good dish under there somewhere.

That Nicola’s offers bitter greens such as broccoli rabe and arugula is an excellent thing, but it didn’t use them wisely. There’s usually never such a thing as “too much arugula,” but there was on Nicola’s rendition of the classic veal cutlet dish costoletta alla Milanese. The meat, pounded until flat and broad as a plate, was nice and tender, with a good, crisp edge. But the arugula was piled on like a heavy winter blanket, studded with garlic so harsh and raw it was enough to make you cry. Literally. 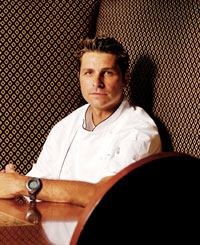 Nicola’s best thing: the antipasto plate, insanely generous, even for two, with heaps of meat and vegetables and pickled things, such as prosciutto, salami, spek (cured ham), cheese, pickled carrot and cauliflower, stuffed mushrooms, ripe pear, sun-dried tomatoes, and green olives as big as meatballs. All for $12.

Supplement the antipasto with the house focaccia—little more than a pizza crust flecked with rosemary but perfect for all those meats and cheeses. Chicken dishes showed some flair, too, such as the thin, tender medallions sautéed with red pepper and chunky artichoke hearts.

Do any Italian restaurants, authentic or otherwise, excel at dessert? Nicola’s chocolate cake was stale, but its house-made cannoli held delicious bits of pistachio and candied fruit. And the wine list was strong, combining familiar labels such as Frogs Leap with dozens of Italian wines.