It’s not easy to walk away from the perfect job, but that’s pretty much what David McMillan did. As executive chef at Nana, the award-winning restaurant atop Dallas’ Wyndham Anatole hotel, he was on top of the world. Anyone who’s worked for a large corporation knows how it is. He had total rein: nearly unlimited funds, the best ingredients, creative license galore.

Some artists thrive under subsidy; others need a little slap of reality. But apart from any creative concerns, McMillan lives in Colleyville and got sick of driving to Dallas
every day.

62 Main gives him the chance to do something more down to earth, to let his hair down. But he’s armed with a Rolodex of contacts, which means he’s using some of the same high-flying ingredients he did at Nana. So, yes, there are flashy signifiers such as foie gras, but the spirit is less formal, more fun. It’s out with the traditional chef jackets, in with the bowling shirts, inscribed with the restaurant logo on one side and the words “kitchen staff” on the other. Woo-hoo.

McMillan is also building a bar across the hall, currently under construction, with an even more casual menu and wireless Internet service. That said, this is Colleyville, where the average yearly income runs in the six figures and the average entrée at 62 Main runs $28.

One of his tools at 62 Main is a 4,500-pound wood-burning oven, which he tracked down—used—on the Internet. For those who follow such things, the wood he burns is Texas-cured oak. You can see it right there in the dining room, where McMillan tends it in a unique little space that’s half-kitchen, half-bar, with bar stools for those who want proximity. The rest of the kitchen, where the salad-tossing and pan-searing goes down, is in back.

The menu covers the basic meat-chicken-fish food groups with about six to seven entrées a night, showing sufficient flair in their ingredients and combinations to stimulate but not overwhelm. One salad comes adorned with fennel, Asian pear, Roquefort cheese, and candied walnuts, but another, the simple green salad, with mixed greens and wee grape tomatoes, proudly exemplifies the power of understatement.

The menu changes daily but has its staples. There is always beef tenderloin with charred onions, and there is often a whole fish, roasted in that oven and dressed with herbs, olive oil, and lemon.
One night the fish was baramundi, which foodies will recognize as a very trendy, au courant fish that hangs out at only the savviest restaurants. It was a nice enough fish—white, mild, and incontestably fresh. The herbs and olive oil were subtle but did their best to cheer it on, like nonsports fans who find themselves at a football party. The strongest punch came from the accompanying lemon slices, some roasted until nearly charred. But whole fish is inherently about freshness and presentation, about getting to see the head and the tail and picking the flesh from the bones. 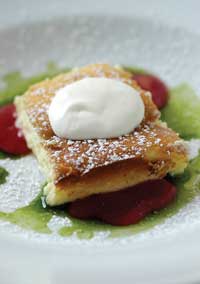 Another staple is Ryan’s salad, named after, and conceived by, McMillan’s young son. I know, I know: nepotism. But he done good. Garden lettuces were matched with a disc of warmed goat cheese, crusted in pecans and rosemary, and drizzled with tomato coriander dressing.

All of the salads were superb. It’s almost impossible not to develop a thing for produce if you’ve lived in California, as McMillan did before coming to Dallas. That same produce savvy shone in vegetable-based soups such as eggplant bisque with tomato crème fraîche. But those ingredients don’t come cheap: most salads were $10 to $12.

Texas quail were two fat-looking birds, their chests bursting with a filling of hickory-smoked sausage, which not only gave them an appealing plumpness but also added a good smoky flavor that emanated from within. Outside, it was all about crackle and sizzle, the crispness of the herb-flecked skin counterpointing the juiciness of the meat. A mound of puréed turnip seemed too rich and creamy to be a mere vegetable. But the sleeper in this dish was the dried fig sauce, sweet and winey, with delectable fragments of moist, chewy fig.

Desserts were simple and good, especially the ones that centered on fresh fruit. Raspberry cobbler, for example, consisted of little more than fresh raspberries topped with bits of crunchy batter and baked.

The restaurant’s wine list is as responsive to supply as the food. Working with Gregory Sonnenburg, whose past assignments include Avner Samuel’s Aurora, McMillan cycles in bottles based on what’s out there. One week, it might be an underground Meritage, another week a Pinot Noir from the Russian River Valley. The goal, as with much at 62 Main, seems to be to just have fun with it. 62 Main St., Colleyville. 817-605-0858. $$$.