“Sandra is sweet and wonderful, but, look, she’s a bit of an airhead. She’s not smart enough to mastermind a crime.”
–Suzanne Sweet

When the Oklahoma City police called Sandra, they were not able to notify her of Alan’s death. She asked, “Is it bad news?” When they said it was, Sandra did not ask what had happened. She only told them to call Alan’s friend in Oklahoma, Ron Barnes, and then she hung up.

Police say they were puzzled by her action, but they add that a grieving wife, suspecting the worst, might have wanted to hear the information from someone she might have known better.

When Barnes called her, Sandra became hysterical. Phil Askew went over to her home, where she wept throughout the night. The next day, a couple she knew from the Bobby Bridewell days came to see her. They both recall that Sandra, in tears, threw her arms around the husband and said, “No one is going to love me again.”

Another death. On the weekend of the funeral, Sandra looked devastated. Her behavior baffled friends as it had during Bobby Bridewell’s last days. She ordered the cheapest casket available for Alan; this infuriated his relatives, but she said Alan would have wanted it that way. Then, according to statements from Alan’s friends and relatives, she said she had forgotten to bring her checkbook and couldn’t pay for the funeral. Others had to take care of it. Nearly 400 people came to the funeral in Edmond. As far as anyone can tell, only one friend of Sandra’s came to Edmond — a University Park neighbor.

Sandra had talked to two Oklahoma City detectives the day before the funeral. They asked a lot of questions about her past. Had she told the Rehrig family that her first husband had died of a brain aneurysm, when he actually committed suicide? They wanted to talk to her and her children after the funeral. But, in another move that angered Alan’s relatives, Sandra left Oklahoma for Dallas hours after the service.

When the two detectives, Steve Pacheco and Ron Mitchell, came to Dallas that next week to look into the murder, they paid an unannounced visit to Sandra’s home. There they learned something that would change the entire nature of the investigation: Sandra said she had already hired an attorney, and that he advised her not to talk to the police. Nor would the children talk with them. When they asked if she would give them samples of her hair and fingerprints, she again said no.

Sandra’s attorney was none other than Vincent Perini, one of the most formidable criminal defense attorneys in Dallas. Perini wrote the Oklahoma City detectives a letter demanding that they never again try to talk to Sandra or her children. Perini also hired the private investigator Bill Dear to look into the case — Dear, the same investigator Sandra had talked with weeks before Alan’s death. Sandra told Dear that she believed Alan was associating with drug dealers and that she feared for her life. 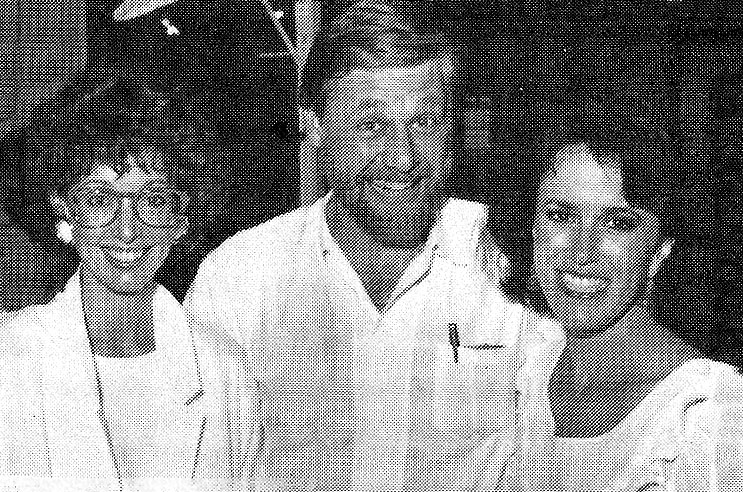 Sandra with friends Carolyn Day and Bob Bishop Photo by Scott Wilson/Park Cities People
Photo by Scott Wilson/Park Cities People
In retrospect, some of her friends say that Perini came on too strong to the police, which made Sandra seem even more on the defensive. “In the ensuing months,” says Carolyn Day, “Sandra said she had stopped talking to him. She didn’t want him. She was trying to hide from him.” Perini will not comment on the case.

Meanwhile, the investigators were persistently retracing Sandra’s steps. They wanted to know exactly where Sandra was on the Saturday that Alan disappeared. The detectives had conflicting statements from Phil Askew and from Austin pediatrician Alan Franks and his wife, Barbara, two friends of Sandra’s who were visiting Dallas at the time. Askew told police that Sandra called him from the Garland mini-warehouse at 6:15. However, Barbara Franks said she called and talked to Sandra between 6 and 6:30 p.m. at Sandra’s home to firm up a dinner engagement that evening. The Austin couple told police that after dinner with Sandra that evening, the three went to see the movie White Nights. (A friend of Sandra’s recalls seeing the same movie with Sandra the evening before.) Police still are trying to verify Sandra’s precise whereabouts that Saturday night and following Sunday.

Only a few days after the officers’ visit to Dallas, according to confidential sources, Perini asked Sandra to submit to a polygraph test. She look one test on December 23 and another on December 30. A friend who went with her to the first examination says Sandra walked out of the polygraph examination office, teary-eyed, and said that she had failed two key questions.

By the summer of 1986, someone else began to pressure Sandra — Alan’s mother. Gloria Rehrig, a high school counselor for 20 years, had rarely communicated with Sandra in the months since Alan’s death. Now Gloria was frustrated with the lack of progress in finding her son’s killer. In May, she came to Dallas to pass out leaflets in the Park Cities, bearing a picture of herself, Alan, and Sandra, and another picture of the Ford Bronco. The leaflet asked if anyone had seen Alan on the weekend he disappeared. Gloria says that when she went by Sandra’s home to ask for some of Alan’s personal items to keep as mementos, like his golf clubs and his Oklahoma State letter jacket, Sandra slammed the door in her face.

In July 1986, Gloria took her battle to court, and it was quite clear who the enemy was. In documents filed in Dallas County probate court, Gloria asked that Sandra be removed as administrator of Alan’s estate, saying that she was “suspected of having complicity” in Alan’s murder. Sandra was to be the primary beneficiary of $220,000 in insurance policies on Alan’s life, and Gloria didn’t want her to have them. By Texas law, a beneficiary of a life insurance policy can be denied the money only if he or she is convicted of murdering that person. If Sandra were indicted and convicted of Alan’s murder, Gloria would receive the money.

Gloria’s move was a long shot. No judge was going to remove a widow from an estate because of the allegations of a bereaved mother who stood to collect if the widow were discredited. Nevertheless, at an August 1986 hearing, Oklahoma detectives Pacheco and Mitchell were prepared to testify that Sandra was their suspect.

After some legal maneuvering, the hearing was postponed. Then, a month later, Sandra did something else that defied explanation: she suddenly resigned as administrator of Alan’s estate. Her attorney noted in a court document that she “has been subject to a series of accusations, which are both false and unfounded in fact.” The Rehrig family was ecstatic. Half of the insurance money was put into Alan’s estate (some of it used to pay the $32,000 in bills that Sandra and Alan owed); the other half will remain in escrow until questions about Alan’s murder are cleared up. Sandra has filed suit in California demanding that the money be given to her. A hearing is scheduled for later this year.

Sandra’s friends are livid about Gloria’s accusations. “Alan’s mother is simply trying to get financial gain out of this,” says Barbara Crooks. “The lady is money hungry.”

It is true that Gloria Rehrig is, as she puts it, “financially strapped.” She says she owes more than $20,000 in legal fees. But she maintains that justice is her real motive. A dedicated churchgoer, Mrs. Rehrig has created a sort of Christian network of friends to whom she regularly sends letters about the work being done to find Alan’s killer. “It is obvious from our trips to Dallas,” she writes in one letter, “that we are engaged in a very real spiritual battle.”

Meanwhile, the FBI continues its investigation of the murder. There is a question as to how much incriminating evidence was found inside the Bronco along with Rehrig’s body. Some hair and bits of fingernails were collected from the truck. And the trajectory of a bullet hole in the driver’s seat confirms that Rehrig was shot while sitting in the driver’s seat by someone sitting in the passenger’s seat. Hamburger wrappers were found in the truck, from which authorities have reportedly lifted fingerprints. Most important, autopsy results show some of the hamburger was still lodged in his throat when he was shot. It would appear that Rehrig knew his assailant well enough to be comfortable having dinner with the person. Since his body was discovered frozen, it is impossible for the medical examiner to pinpoint the precise time of his death. But an Oklahoma City private investigator has told police that while he was taking his girlfriend to the airport at 7:30 on Sunday morning, the day after Alan Rehrig disappeared in Dallas, he happened to see the Bronco by the electrical substation.

In California, Sandra Bridewell is trying to sever all her ties to Dallas. Although earlier this year her BMW was repossessed (a source says Sandra ran down the street after the tow truck driver), Sandra still has some money. She was able to pay off the loan to get her car back and also paid off a $60,000 loan she owed to the Bank of Dallas.

Her duplex on Asbury is for sale for $275,000. Even now, people driving down the street will slow down in front of the residence and stare. Vince Perini stopped representing Sandra in March 1986, but she has since hired another attorney in Dallas and also retains an attorney in San Francisco. Occasionally, her children call friends here. Her son, Britt, is attending a small college near San Francisco with a couple of his old Highland Park High School friends. “The kids went through everything that their mom went through,” says a Dallas teenage girl who remains best friends with Sandra’s daughter Katherine. “They heard all the rumors. They knew why other kids from Highland Park High School weren’t hanging around them any longer. I don’t blame them for moving to California. They felt deserted. You don’t know how those kids have suffered.”

Barbara Crooks says Sandra herself is calmer now that she has moved. “It was such a difficult situation with her former friends turning against her. She’s more subdued, but she hasn’t lost all her zest for living.”

It has been nearly a year and a half since Alan Rehrig was murdered, and although Lt. Robert Jones of the Oklahoma City Police says the case is under “vigorous, active investigation,” new leads to Rehrig’s killer seem as cold as that frigid December day when they found his body. Could it be that the beautiful Sandra Bridewell — despite her quirks and inconsistencies — is just an innocent, suffering victim of the worst kind of tragedy? Sandra’s close neighbor — a woman who was a confidante of Sandra’s all through the early days of the Rehrig investigation, and who now does not trust Sandra or speak to her — remembers going to a movie with Sandra one evening not long after Rehrig’s death. In the film was a scene where a man is suddenly shot.

“When it happened, Sandra leaped halfway out of her chair and almost fell onto the floor,” recalls the woman. “She was so startled. She had this sick look on her face. She got up and went into the women’s restroom and got sick. I looked at her, and I just didn”t know what to think. I just didn’t know.”