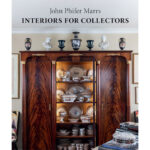 John Phifer Marrs knows a little something about the power of curation—you could even say he wrote the book on it. The beloved Dallas interior designer’s new coffee table book, Interiors for Collectors, explores all the lessons he’s learned when it comes to amassing, arranging, and amending treasure troves of books, silver, porcelain, and more. “When I started looking back at the volume of my work through the years, I found there was a common denominator: I’m drawn to people who are collectors,” says Marrs.

Whether you’re showing off museum-grade artifacts or factory-made blue-and-white, Marrs shares that the importance of lighting, backgrounds, and arrangement can’t be overstated. He also emphasizes a lesson that’s particularly hard for die-hard collectors to hear. “It’s even difficult for me to take my own advice when it comes to editing,” he confides. “But sometimes you have to let things go. Instead of three mediocre things, it really is better to have one great piece.” 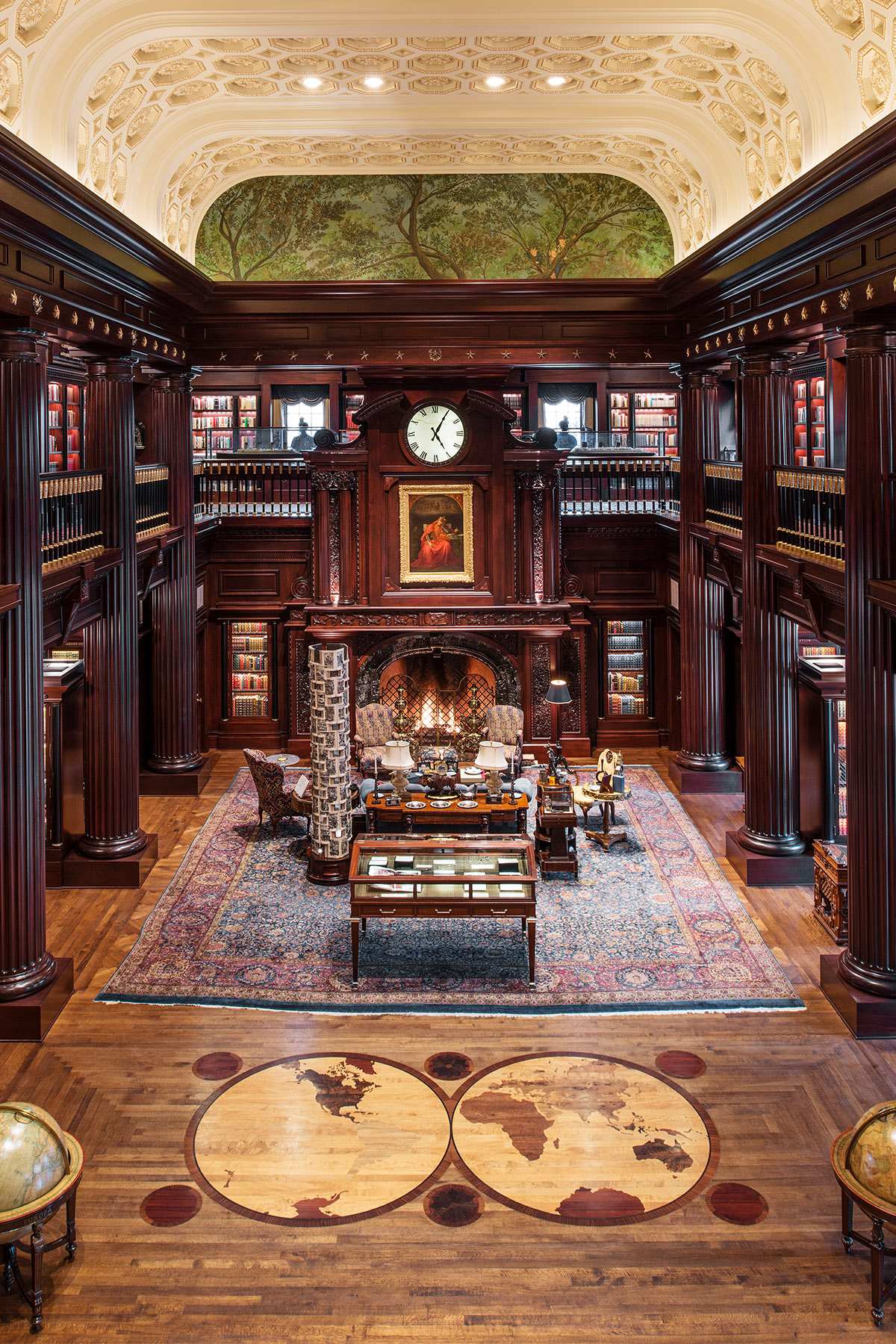 The Ask: Outfit a library with a reader-friendly area for historical books and manuscripts.

The Solution: “This library was a dream project that just so happens to be one of the biggest of my career,” says Marrs. His client wanted a proper library for his collection of important tomes, so he added a wing to his home and enlisted Marrs to figure out how to properly arrange the high volume of volumes, along with a cache of historically significant artwork. “My role was to figure out the cabinets and cases and how to display, protect, and light everything in there,” Marrs says. “This is a private home, not an institution, so I also wanted to make sure there was plenty of warmth in this space filled with so many wonderful, priceless things.” 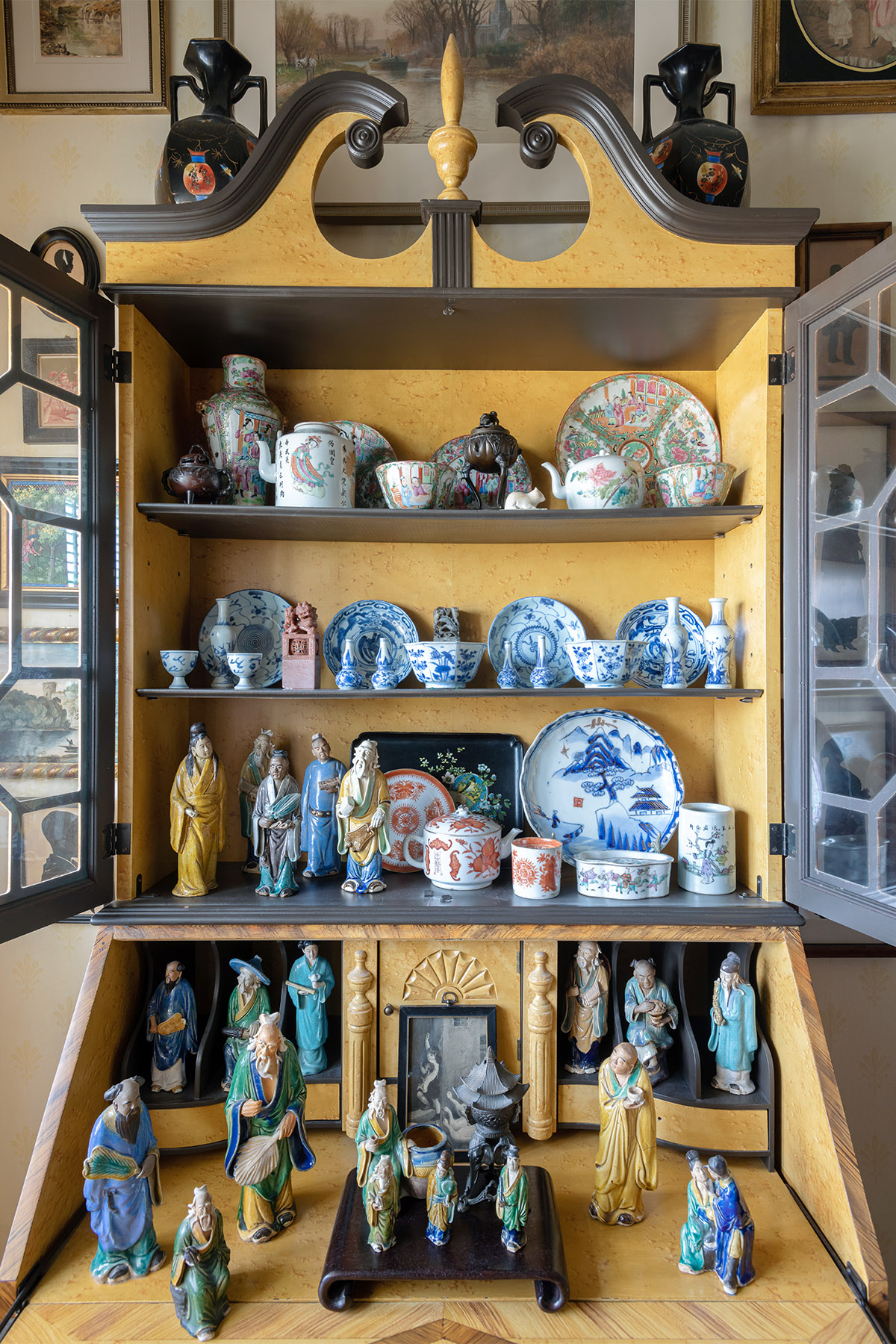 The Ask: Put together a pristine spot for an army of mudmen.

The Solution: When Marrs moved into a high rise a few years back, he decided it was time to pare down his massive collection of mudmen, which are brightly glazed Chinese figurines noted for their unpainted hands and faces. “I probably had about 50 or 60 of them. A lady in the armed services gave my parents a little statue as a gift, and I ended up taking him to college. Later, I started collecting them in earnest,” he says. Once he relocated to his deluxe apartment in the sky, he limited himself to only the 6- to 8-inch-tall figurines, which were just the right size to fit into various compartments of an antique secretary. He added selections from his array of Chinese porcelain on top to finish the vignette. 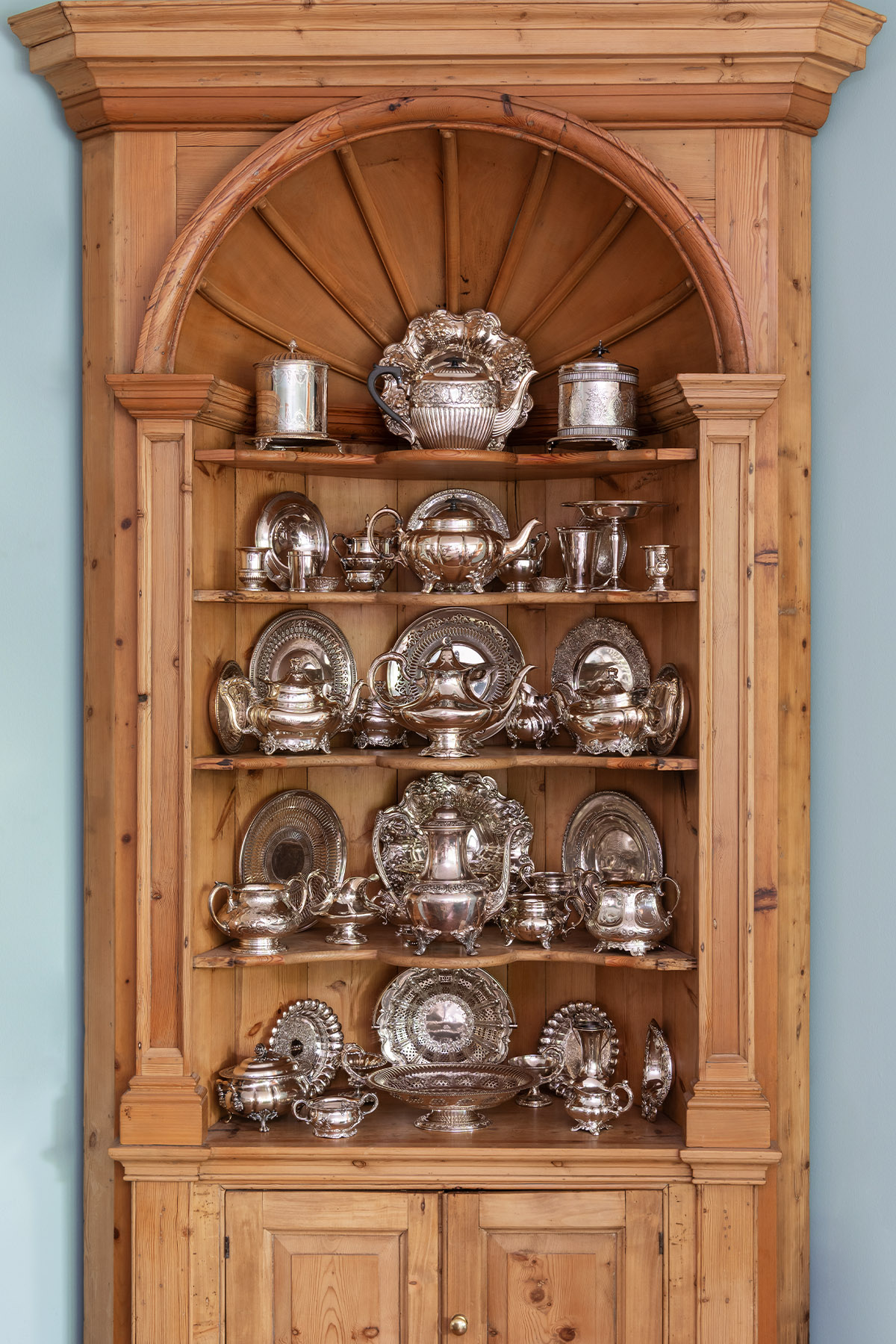 The Ask: Be of service to a prolific silver collector.

The Solution: Marrs was approached by a client who needed help figuring out what was fit for shelves from her ever-growing stockpile of Victorian silver. “She has a tremendous amount, so it can’t all make the cut,” Marrs explains. Client and designer agreed that an antique pine corner cabinet would be the proper vessel for spotlighting vessels, and Marrs got down to business rotating in different shapes and sizes for lots of variety. “I’ll also ask my clients to tell me their favorite pieces or to point out the ones with the best provenance, because I really might not know,” he says. “But that’s what makes it fun. I’m learning all the time!” 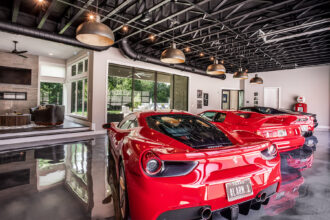 The Solution: Designing well-appointed garages isn’t exactly an everyday occurrence for interior designer Amy Guess, but when a Fairview client came to the table with a fleet of red-hot Ferraris and a Lamborghini or two, she put the pedal to the metal and created a 1,350-square-foot carpark that is equal parts handsome and hardworking. Guess says masculinity was key from the very start. The homeowner asked for a space with a strong industrial feel and a bit of a polished edge, but he wanted the vehicles to be the element that added all the va-va-voom. The designer more than delivered. “The cars influenced virtually everything in the space,” says Guess. “The color palette is neutral, so those red cars are really the only bold color in the space. The floor is shiny and polished to better reflect the paint, and the lighting was installed to shine on the cars, including the adjustable track lighting for when he moves the cars around.”

The Ask: Create a display where nostalgic records and classic guitars could truly sing. 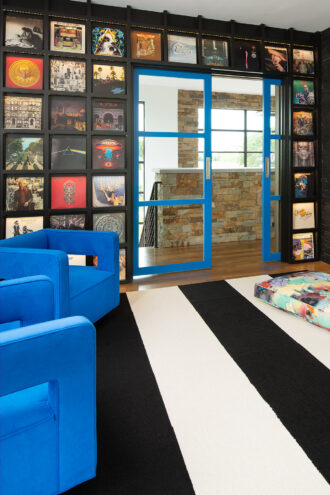 The Solution: As Mary Anne Smiley began working with a couple on their brand-new home in Flower Mound, the husband mentioned that he had some old-school vinyl—Beatles, Led Zeppelin, Rolling Stones, and so on—that he was dying to show off in his music room. “My first question was, ‘How many are we talking about here?’ ” says Smiley with a laugh. Turns out, it was a lot. So Smiley tasked him with cherry-picking his very favorites as she took to CAD to configure a wall fit for rows and rows of classic 12.375-inch record covers. “We had to really engineer all the spacing in between,” she says. “ I wanted the cubicles set back enough so that we could have little teeny-tiny rows of LED strip lighting above each one. It was all pretty technical.” And because this is a room where music is also meant to be made, Smiley crafted a special place for the homeowner’s guitars in user-friendly cubbies lined with textured stainless steel.

The Ask: Carve out a winning space for a former Texas Ranger’s keepsakes. 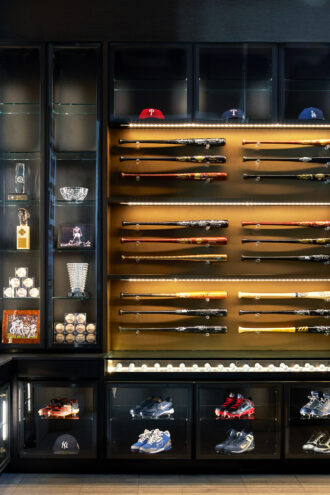 The Solution: What do you do when you’re working with a very modest former professional baseball player with a very generous amount of memorabilia boxed up in the garage? If you’re designer Allison Seidler, you convince him—and his wife—that his bats, hats, shoes, and awards are well worth showcasing in the house. It took some arm twisting, but once Seidler got him on deck, she collaborated with Paul Buckner and Livingwerks Group to handcraft cabinets outfitted with custom lighting. The one-of-a-kind case spotlights all that glorious gear but also complements the Preston Hollow home’s modern decor. And because Seidler was going for a home run, she also made a place for a host of other sporting goods. “We have signed jerseys and footballs from top athletes on another wall,” she says. “We also inlaid all the golf balls he’s saved from every course he’s ever played onto a countertop in the space.”

The Ask: Wrangle up a unique spot to showcase a slew of antique spurs.

The Professional: Ashley Cathey of Avrea and Company Interiors 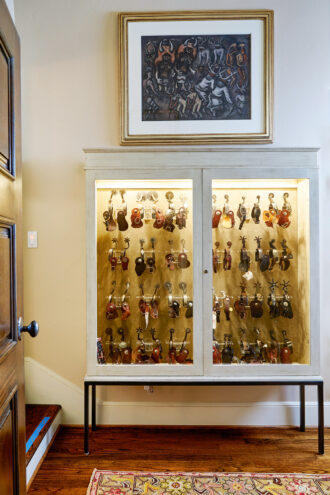 The Solution: When Ashley Cathey’s godfather asked her to decorate his home, she was happy to help. For the most part, it was easy to herd his prolific collection of Western art, but figuring out how to harness all the spurs he had picked up over the last three decades was more complicated. “He has hundreds of them, and they weren’t displayed in any meaningful way,” says Cathey. “I wanted to come up with a fun concept for him.” So she enlisted the help of noted casegoods maker Lewis Roberts, and together they designed a rustic cabinet complete with a custom iron base, Ultrasuede interior, and dramatic lighting. While figuring out how to tastefully hang spurs might seem simple to most city slickers, Cathey says it was nothing of the sort. “There was definitely a learning curve,” she says. “But it was important to highlight the best of the collection in a case that was sophisticated enough for a beautiful home in Greenway Parks.”