Builder Mark Molthan is always on the move. Nine times to be exact. He’s lived in transitional, traditional, and Andalusian style homes. He’s built pools, basements, and subterranean garages. His homes have always been outfitted with the latest and greatest tech features. But why move again? For Mark, it was for a garage.

“I came up with the idea because I saw it on another project, and we did it for two other houses,” he explains. “I got the ‘wantsies.’ ” And when you’re Mark Molthan, you can make it happen.

Mark designed his modern, Santa Barbara–style, University Park home with a convertible patio space and the 2,880-square-foot garage/rec space as the starting point. “My kids use it to practice lacrosse, play basketball. I have guys over here five nights a week to play pickleball. And I really wanted a place to have a party or have a bunch of people over.” It’s equipped with air-conditioning and speakers. There are sport lockers and a fridge with cold drinks. There’s a gym on the second-story that can also be turned into a guest house. At night, it’s a seven-car garage. 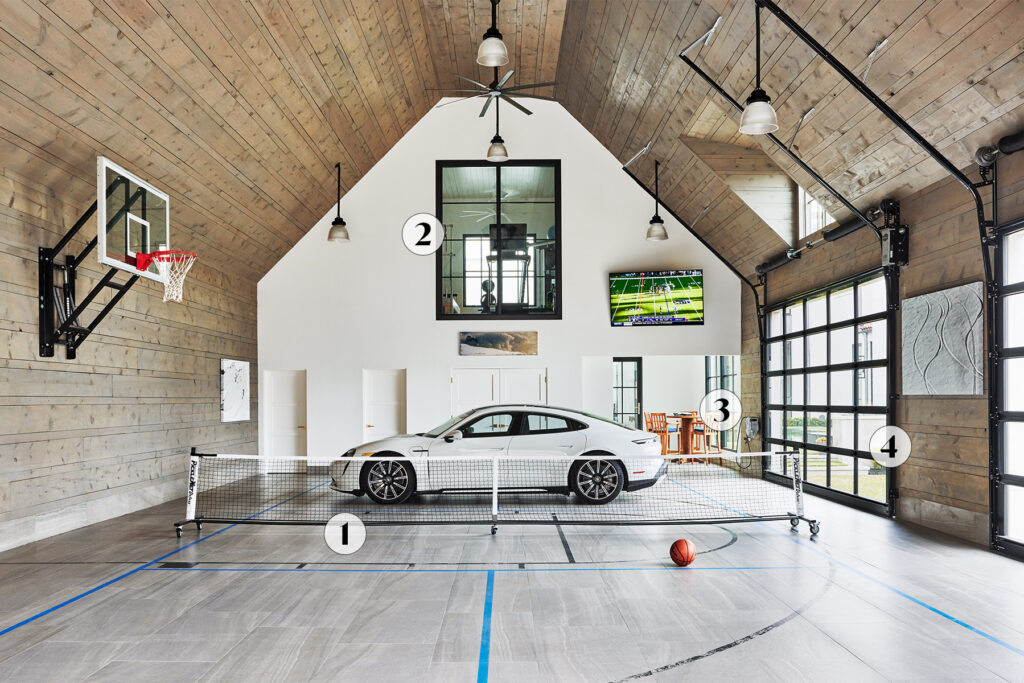 The walls and soaring ceilings of builder Mark Molthan’s personal 2,880-square-foot garage are clad in yellow pine. The multipurpose space, which opens up on three sides and looks out onto the backyard, accommodates up to seven cars and is air-conditioned and audio-equipped.
Cody Ulrich

The garage doors open on three sides and look out to the backyard. The grass is drivable and was laid on top of black fiber mesh so that he can move cars in and out, or host drive-in movies for friends. A large movie screen looks out over the negative-edge pool. “At night, this is bad to the bone,” he says.

It probably takes a lot to impress the builder—he’s created some pretty over-the-top stuff for clients like Dallas Cowboy Tony Romo and PGA golfer Hunter Mahan. Think glass-bottom pools and golf-simulator rooms. But walking with him around his house, his eyes light up with every push of a button. Like the patio’s airplane-hangar-style doors that fold up and down. 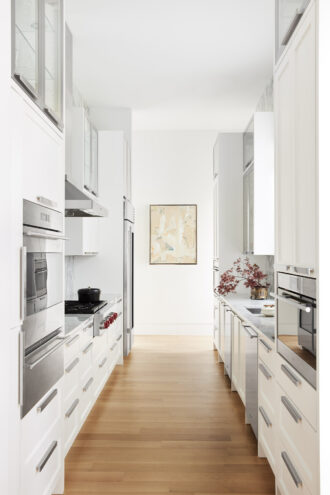 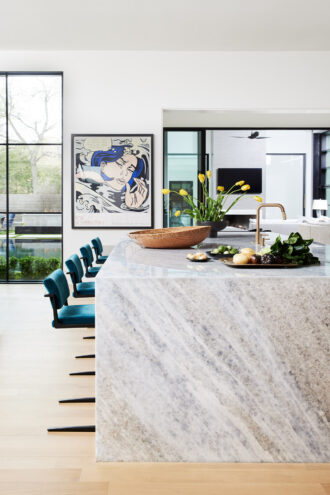 The decorative kitchen is a gathering spot in the home and connects to the much-used keeping room. The stools are from Holly Hunt.
Cody Ulrich

“I wanted it to look like an awning,” he explains. So he teamed up with Renlita Custom Openings to make the showstopping glass and steel doors. Mark’s goal was to create a true convertible space that was enjoyable no matter the weather. “When it is freezing outside, it is the best room because you have the radiant heat in the ceiling,” he explains.

Throughout the 9,000-square-foot home there are other playful details, like a video game/media room that boasts three televisions. There’s even a space that was turned into a “Zoom room” for his oldest daughter to finish out her San Francisco–based internship.

And even with all of the moves—with perhaps more in their future, too—the Molthans proved that it’s the people who live in the house that make it a home. Mark’s wife, Heather, had but one request: a “keeping room” for the family of five to hang out, watch television, and eat meals, which they did quite a bit during quarantine. Mark smiles when he recalls the last year of togetherness. “I didn’t know it was going to work this well,” he says. “I’ve enjoyed my family. It’s so much fun having them around.”