The way Joshua Rice sees it, an empty room offers a chance to create something spectacular. So why would you fill it with predictable pieces? “I want to give everybody the most unique interior that I can,” says the designer.

“I don’t want someone to come into one of my projects and go, ‘Oh, I have that same sofa.’ That’s something I’m always trying to avoid.” To be sure his interiors are unexpected, Rice seeks out rare vintage furnishings and new works by up-and-coming artisans. And when he can’t find exactly what he’s looking for, well, he’ll design it himself.

For a recent project in Highland Park, a transitional-style spec house that Rice describes as lacking “a distinct architectural character,” he was on a mission to make every space as interesting as possible. Plus, the home needed a personality adjustment. “Our tastes run more modern,” says the homeowner, who shares the house with her husband and two young kids. And some of the home’s formal features—like the grand cast stone staircase in the foyer—leaned more traditional than they would have liked. 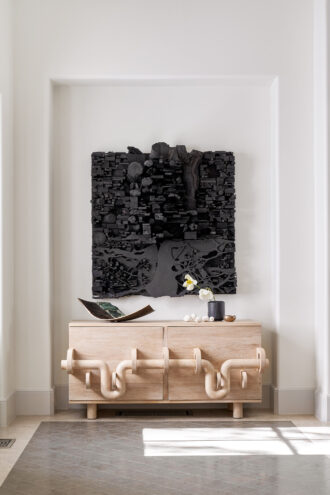 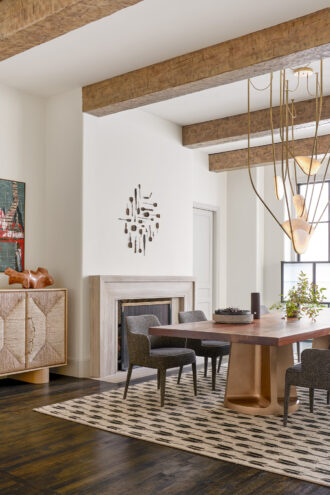 Rice redesigned the dining room fireplace, replacing the oversize original with a sleek surround made of Nublado marble. Above it he placed a collection of 23 hand-carved spoons by Swedish woodworker Marie Eklund.
Nathan Schroder

“We had a vision that if we had a more modern interior, we could use the good bones and pretty clean lines of the house and make it look more to our aesthetic,” she says. To do that, the couple needed the right interior designer, and after perusing Rice’s portfolio, they knew they’d found their ideal design match. “We felt like his aesthetic was very clean and very modern, but it was timeless. And we felt like he had enough of an edge in his aesthetic that it could work well to counterbalance the more traditional elements of the house.”

To take some of the formality out of the interiors but still keep them sophisticated, Rice changed out all of the traditional-style light fixtures, streamlined one of the fireplaces, and helped the homeowners expand their collection of contemporary artwork. He also populated the home with what he calls “an obscurely curated group of designs.” In the living room, a custom metal coffee table by Brooklyn-based Douglas Fanning shares space with two midcentury lounge chairs by legendary Danish designer Ib Kofod-Larsen that Rice sourced through a gallery in the Netherlands. And in the dining room, an attention-grabbing brass-and-alabaster chandelier that Rice designed himself illuminates a walnut-and-bronze table built by Canadian craftsman Jeff Martin. “That’s the first table of that series ever made,” Rice says. “Now it’s a major part of his line, but this is the first.”

“I don’t want someone to come into one of my projects and go, ‘Oh, I have that same sofa.’ ”

Special pieces abound in the rest of the home as well, including a circa-1960 Italian desk by Osvaldo Borsani in the office, a rare vintage sofa by famed Danish design duo Fabricius & Kastholm mounted on the wall in the entry, and multiple bespoke pieces throughout. “[The homeowners] were always very receptive to unique things, so we did a lot of custom stuff,” says Rice. “I like doing that anyway, but in this particular project, we really went crazy with it.”

Though Rice’s clients had studied his work before they hired him, they didn’t realize the extent of his encyclopedic knowledge of furniture design and the lengths to which he would go to find, commission, or create the perfect piece. “We had no idea what a complete furniture nerd he was, but it was such a wonderful surprise and gift that he was,” says the homeowner. “We were completely pleased with the outcome when everything was finished and installed, but that’s been a couple of years, and the house has just continued to be a place of beauty and comfort.” 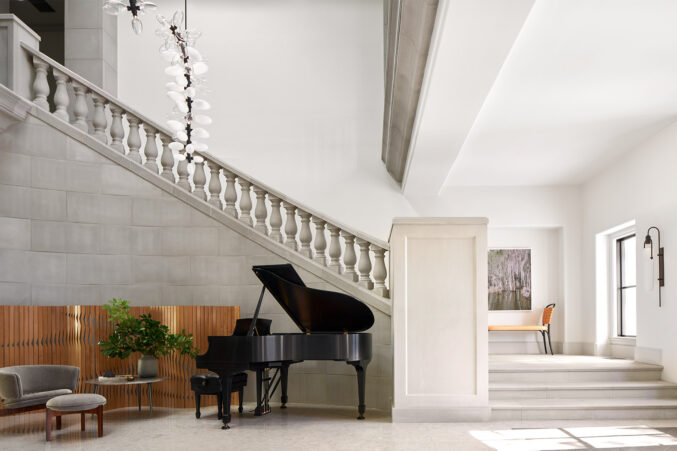 One of the reasons that a Joshua Rice project tends to stand out from the crowd is the interior designer’s passion for collaboration. He is particularly fond of working with up-and-comers in the worlds of art and design, like California-based Stefan White, the young furniture designer who created the wow-worthy “Lift & Drop” cabinet in the entry. Rice had seen White’s prototype of the piece, and he loved the concept. So he reached out to him, asked him to tweak some of the proportions and details, and soon the solid-oak beauty was born. The resulting cabinet was the first production piece of that design. “I like collaborating with young designers. They have such enthusiasm,” Rice says. “You get something completely unique oftentimes, or you get to be the first. And he or she gets something to put in their line.”