Designers and clients can find one another in a variety of ways. Sometimes the spark happens with a set-up—a referral from a friend or family member—or it might occur after some good old-fashioned Instagram stalking. But once in a while, if you’re very lucky, all you have to do is look down the street. That’s how it happened for Ashley and Adam Spears, who had the good fortune to bond with designing duo Sara and Corbin See over children’s play dates and school projects long before fabric swatches and CAD drawings became regular topics of conversation.

As the couples got to know one another through the years, the topic of Ashley’s “dream house” came up more than a few times. “This was a house that we used to drive by when I was growing up,” says Ashley. “Every girl has their ‘dream house,’ and this one has always stuck with me.” So when the five-bedroom, four-bathroom, 1920s-era Renaissance-style property, known as the The Kessler Mansion, went on the market, no one was at all surprised when Ashley booked it over there for the open house. What was surprising? The phone call the Sees got later that day. “By the time she called us to come over, her husband and real estate agent were already there,” says Sara with a laugh. “They wanted us to walk through it with them, and the rest is history. We offered our opinion that day, and then we just never stopped.” 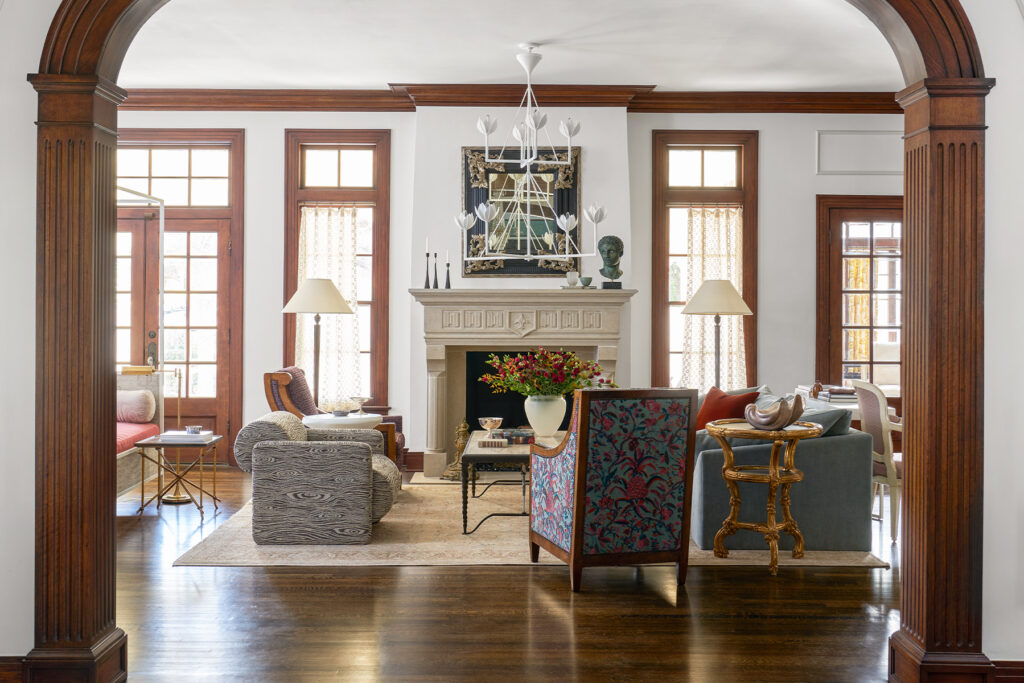 The elegant living room is a perfect balance of modern and traditional thanks to a newly cast mantel and a sculptural chandelier by Visual Comfort. A Kelly Wearstler sofa and geometric “Esfera” chair mixes with more classic tables and chairs, all by Dessin Fournir.
Nathan Schroder

Although the property was in good condition, there were updates that needed to be addressed as soon as the Spearses closed the deal. Some issues were purely cosmetic—the rich red damask fabric adorning the dining room walls, for instance. Other projects like the kitchen and bathrooms required full-blown construction. And while Ashley and Adam were all about present-day amenities, they didn’t want to sacrifice any of the old-world charm. “It was important to them to maintain the integrity of the house, with respect to the period and architecture and history, but they also wanted to make it livable for a modern family with three boys,” says Corbin.

Lucky for the Spearses, that’s exactly what the Sees do all day, every day. The couple, along with Corbin’s brother and business partner, Ross, have built a reputation for their ability to flawlessly combine the classic and the ultra-modern. “Right away, I said, ‘Gosh, this house has y’all’s name all over it,’ ” Ashley recalls. “My husband loves modern; I grew up with antiques. They’re uniquely gifted enough to marry those two loves together.”

While many of the initial projects focused on the home’s history—adding complementary millwork, commissioning Francois & Co. to cast a more period-inspired mantel for the living room, and re-sanding and staining the original floors—the kitchen came with another set of challenges. The Sees aimed to create a state-of-the-art space that still felt more roaring ’20s than 2020s. To that end, Ross and Corbin studied old photographs that helped inform both their architectural choices and material selections, which included white oak, brick, marble, and Belgian limestone. “Our goal was to synchronize a mix of textures and time periods,” says Ross. Agrees Corbin, “Even though it was a total gut, the kitchen feels perfectly in sync in both style and scale to the house.” 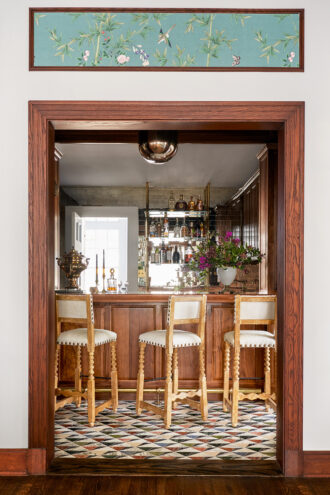 Friends and family can belly up to the bar in spindled “Romero” bar stools by Minton Spidell beneath lighting by Urban Electric.
Nathan Schroder 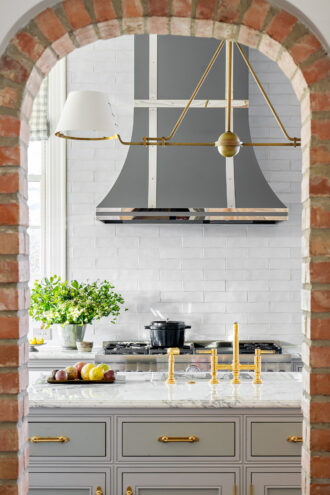 The Sees painted the island two different colors to add dimension and only used flush-mount and chandelier lighting to maintain a more period feel.
Nathan Schroder

When construction was complete, Sara began piling in the textiles—a carefully curated mix of graphic wallpapers, kilim rugs, animal prints, and modern lace—to help carve out right-sized living spaces within the large rooms and set the stage for their signature blend of bold artwork, sleek lighting, and mix of modern furnishings and family heirlooms.

“Ross and Corbin grew up in a household where there wasn’t a room without an antique. They learned the art of layering in modern things. I followed suit, and now all of our talents blend together,” says Sara. She also credits their friends for the successful collaboration. “They were very honest and said, ‘We have not done this before,’ and rewarded us with their blind faith,” she says. “Working on their dream home was a dream for us, too.”

When you want to freshen up the formal or tone down the traditional, Sara and Corbin See say making a few of these small changes can go a long way.