Fifteen years ago, when MORE Design + Build was a burgeoning business, founders Chad Dorsey and Kurt Bielawski got a call from a pair of young homeowners who were newly married and just starting a family.

The couple—Paul and Andrea Johnston—had spent a year looking at houses in Lakewood, including one early in their search that they felt had too many issues to consider. “It was a mess,” Paul remembers. “Bad floorplan, bad everything.”

Once they found an intriguing prospect, a friend referred them to Bielawski and Dorsey, who suggested they meet at a house they’d just finished remodeling. “When we walked up, we realized it was the house we had passed on but Chad hadn’t,” says Paul, who marveled at the before and after. “He solved everything in a simple, casual, and elegant way.” They teamed up to update their Dines and Kraft–built Cape Cod Colonial, where Paul, Andrea, and their two children lived happily for the next 12 years. 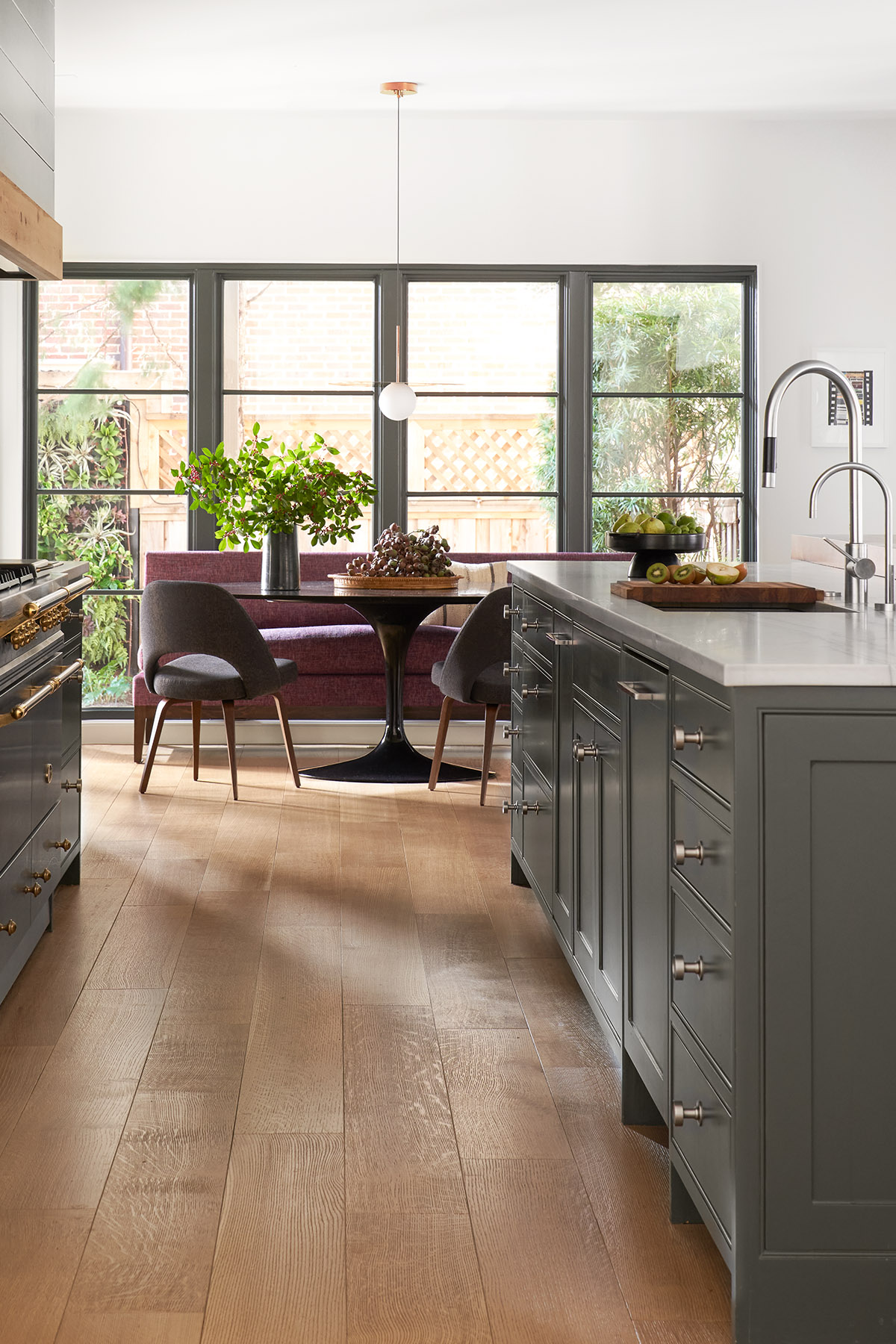 Located off the kitchen, this eating area serves as the main dining room, albeit an intentionally informal one. The eggplant-hued sofa was at the request of Andrea, who wanted her favorite color, purple, incorporated throughout. Dorsey encouraged his clients to forgo an all-white kitchen and instead paint the millwork in Farrow & Ball Studio Green no. 93 to better balance the purple. A “Sully” Lacanche range, Dornbracht “Tara Ultra” faucet, and Waterworks hardware round out the space.
Nathan Schroder

When it came time to give the house another refresh, Paul reached out once more to Dorsey—now an acclaimed interior designer, and MORE an in-demand firm with projects all over the country—this time looking for a recommendation for someone willing to take on a project of their size. To his surprise, Paul recalls, “Chad said, ‘Yes…me. I’d love to work with you again.’ ”

The plans that developed would’ve required the family to move out for more than a year, prompting them to see what else was on the market. A stone-covered contemporary in East Dallas caught their eye. Though a total departure from their typical style, the home’s three courtyards and lush, half-acre lot helped seal the deal. Says Bielawski of the appeal: “The house had great natural light and the spaces all perfectly framed views of the outdoors. It really fit their personality and lifestyle and what they wanted their next chapter to be.”

Over the course of a year-long renovation, Bielawski and Dorsey were able to blend Paul’s penchant for clean, uncluttered lines and natural light with Andrea’s “cozy, comfy” style. The one through line, Dorsey says, was bringing the outside in. “It was truly driven by the experiential nature of the outside experiences,” Dorsey says of the design plan. “How can we honor the architectural nature of the house, and the landscape-architectural nature of the house, but recreate the experience inside for how they want to live?” 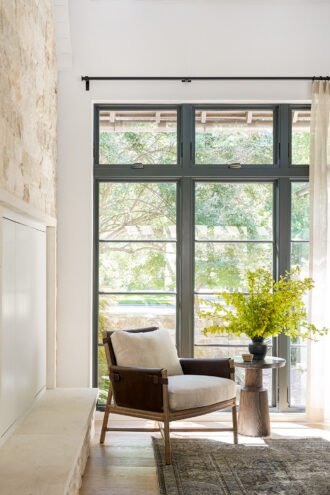 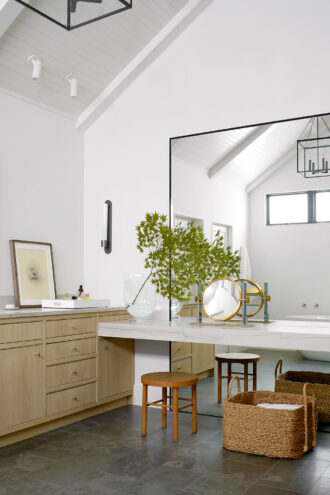 Nathan Schroder
LEFT TO RIGHT It was the views to the outdoors that ultimately sold the homeowners to purchase it.; Dorsey designed the floating quartzite dressing table to give the master bath a more airy feel, enhanced by the floor mirror that reflects the tub wall.

They embraced the views to the outdoors, strategically opened up spaces, and leaned into the home’s mountain-lodge-like feel while simultaneously lightening and brightening it, utilizing natural materials, adding light wide-plank hardwood floors throughout, and smoothing the walls to a museum finish. In the living room, the stained wood ceiling treatment was painted white and the fireplace was modernized (see sidebar, right).

Andrea had two main requests: lots of purple, her favorite shade (which Dorsey gamely delivered), and a kitchen with ample storage to facilitate her frequent cooking. While the floorplan didn’t allow for an overabundance of cabinetry, some careful planning—“We defined where everything would go, down to the plastic wrap,” Dorsey says—and extra square footage allocated to the pantry (made possible by the removal of the front staircase) meant the succinct space was more than functional. “They basically proved to us that we didn’t need all the space that we thought we needed,” Andrea says.

The comfortable yet clean result suits the family perfectly. “One of Chad’s biggest strengths is that he can pull off a natural, casual, and comfortable elegance that doesn’t feel forced,” says Paul. “The design is really focused on how the four of us live together.”

Skincare 101 From Home with House of Preservation