When designer Brant McFarlain and his husband, Justin Moon, bought their Oak Lawn home in 2013, the plan was to stay for seven years.

Purchased on an impulse at the height of a hot real estate market, the house previously belonged to one of McFarlain’s friends but had since changed hands. While on their way to tour another property nearby, the pair got a sign—in the most literal sense—that this house was the one.

“The realtor was putting the sign out as we drove by. I told Justin, ‘That house is really cool. Let’s just get it,’ ” says McFarlain, who convinced Moon to make an offer without so much as stepping foot inside. “That’s when real estate was flying off the market.”

As it turned out, the intervening years had sullied the house—or muddied McFarlain’s memory. “I realized it needed more work than I thought it did,” he remembers. “It was a bit more of a project than we thought it was going to be.” 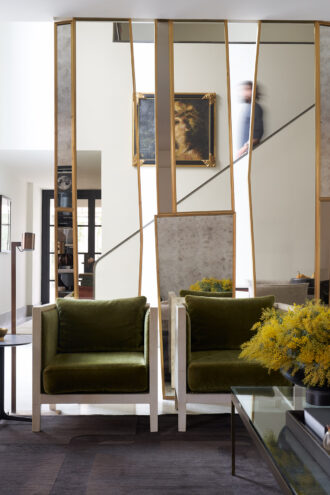 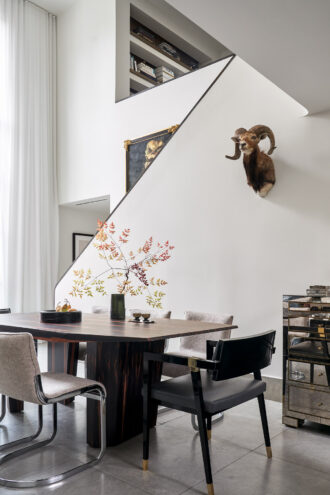 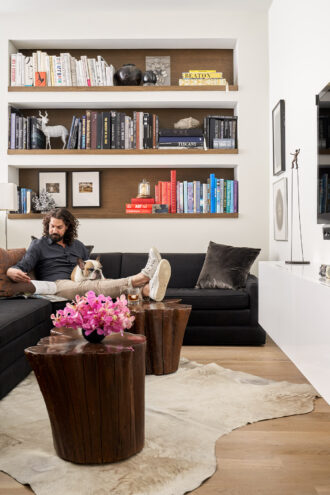 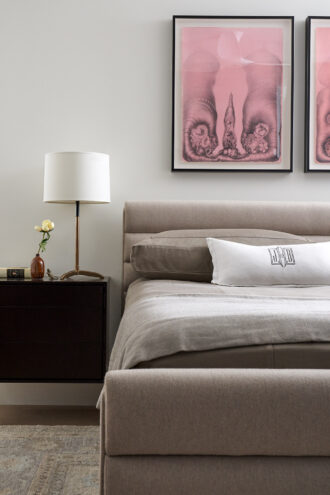 They wasted no time in gutting it. Fresh off a trip to Prague, McFarlain incorporated touches inspired by the European soft-modern aesthetic—like a rounded plaster stair rail, which replaced a ’90s-era glass banister. They installed steel doors and windows, expanded the master bath, and added more storage—including a custom shoe closet to house his and Moon’s combined 300-plus pairs. They left the house’s compartmentalized layout intact, which McFarlain prefers to the open floorplans that have become de rigueur. In fact, he created greater delineation between the living and dining spaces with a brass-and-mirrored screen he designed. “Before, the energy kind of bled out of the living area,” he says. “Now, it’s a cozy, sexy, little room.”

“For a small house, there’s a lot of drama in the architecture. It’s a very sexy house.”`

But rather than rush to finish every nook and cranny, the couple allowed themselves time to make informed decisions in a few key areas. In 2019, the couple remodeled their kitchen—complete with Ornare cabinetry and a breakfast nook where Moon can sit while McFarlain cooks—and a bar for their frequent entertaining, especially useful around the holidays. “We waited to do the kitchen because we wanted to see how we used it,” McFarlain says. “It’s a small area, but it’s brought so much life to our house.” This summer, spurred by sheltering in place, the couple put the finishing touches on the final piece—the pool and backyard—adding a 20-foot-tall window to forge a connection to the inside.

Despite the hastiness of their purchase—and any initial misgivings they may have had—the home has proven a perfect fit for the pair. At 2,400 square feet, it’s just the right size. While large enough to comfortably house them—plus their French bulldog, Boudreaux, and their frequent out-of-town visitors—it’s not too much to maintain for the couple, who typically travel at least one week a month and recently purchased a second home in Santa Fe. “For a small house, there’s a lot of drama in the architecture,” McFarlain says. “It’s a very sexy house.”

At long last, the house is exactly as they want it to be, and seven years in, the clock restarts: McFarlain’s plan is to stay for (at least) seven more.