The Hunts’ four children can often be spotted in the formal living room tossing footballs, banging on Morgan’s heirloom piano, and playing a game of hide-and-seek under Casey’s grandfather’s gilded desk. But Morgan doesn’t flinch. “Even if I have very nice stuff, it’s not a ‘don’t go in there’ sort of thing,” says the mother, interior designer, artist, and author. “Despite having four children and a dog and a husband, I still have light furniture and nice things, and it works.”

“Despite having four children and a dog and a husband, I still have light furniture and nice things, and it works.”

Each room in the 5,700-square-foot home has a healthy balance of old and new. When the couple bought the house seven years ago, they stripped the 1980s traditional of its dated aesthetics. They refinished floors, knocked down built-ins, and opened up a wall that separated the breakfast nook, kitchen, and den. Then, Casey and Morgan brought in their collection of antiques and heirlooms, and Morgan got to work strategically placing the pieces in each room so that the home still feels fresh and young. The dining room, for instance, features a table and chairs from her grandfather’s home in Aiken, South Carolina. It’s mixed with a chest from the 1600s, a mirror from Casey’s family, and whimsical murals on the walls handpainted by Morgan.

This layered aesthetic speaks to Morgan’s talent as an interior designer. She launched her design business about a year ago after she spent years helping friends and family with their homes, but she has been designing, making, and creating ever since she was a girl growing up in Greenville, South Carolina. “I would see something and figure out what I wanted it to become,” she says. “Like in high school, cutting and sewing a scarf to make a shirt.” When she was a young teenager, she painted tonal green stripes on her walls, inspired by a cover of Veranda, and asked her mom to sew the drapery and make the bedding.

Even when Morgan was attending Southern Methodist University, she often popped in to local antiques shops. “A lot of this stuff I’ve been collecting since I was in college, and it has kind of moved with me through all my different phases of life,” she says. She has found creative ways to incorporate almost every piece that has been passed down to her, even in the most unlikely places, such as her grandfather’s settee that appears in the playroom.

She’s also creating her own heirlooms. Before each child was born, Morgan made a piece of art that they will eventually inherit, and the pieces can be found around the home—a zebra in the playroom, a gold foil bunny in the dining room, a ballerina in the girls’ room, and a water lily oil painting in her office. She pairs her artworks with originals by Brenda Bogart and Sally King Benedict, as well as framed photos and children’s art.

Morgan often tells clients to bring down the boxes from the attic and dig through them for sentimental finds, much like she does with her own home. “You can always find something and reframe it,” she says. “A trinket or love letter—there are ways to incorporate it in your everyday life, and it becomes beautiful.” 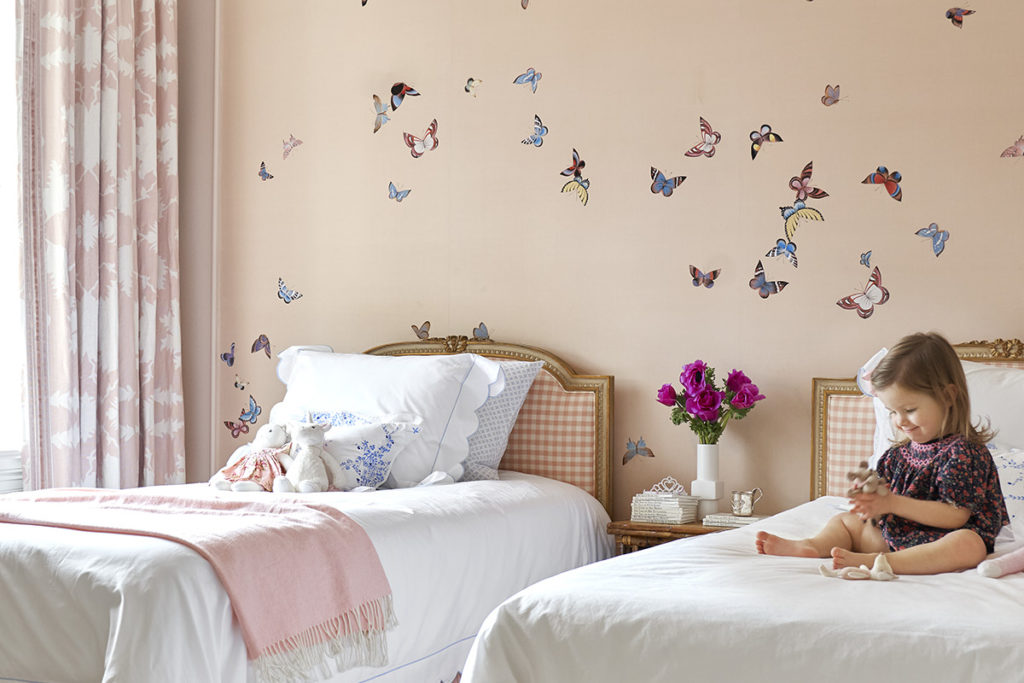 In the girls’ bedroom, handpainted wallpaper by de Gournay provides a whimsical backdrop for headboards from Country Garden Antiques. The bedding is by Matouk, and the chandelier is from Horchow.
Nathan Schroder

What a Wonderful World

The girls’ bedroom makes a special appearance in Morgan’s debut children’s book, Tales of Wonder. The story follows a little girl, whose special power is wanderlust, as she visits the seven continents in her dreams. The idea came to Morgan when she was midair on a flight. “I scribbled it down, came home, and then I had a baby a month later, so I tabled it,” she says. “When she was 4 months old, I thought, ‘I think I can figure out how to make this work.’” She found Ireland-based illustrator Lauren Taylor on Instagram, and she helped bring Morgan’s fanciful story to life.