A North Dallas Home with a Modern Spin on Midcentury

A North Dallas Home with a Modern Spin on Midcentury

Pam and Gary Simmons live in a very specific home. It combines vintage aesthetics with 21st-century touches such as a sound system that the neighbors envy and a kitchen filled with Miele appliances. Had Gary had his way initially, however, things could have turned out differently.

Pam points to a trip to Frank Lloyd Wright’s Fallingwater as the turning point for her husband—who, 10 years ago, wanted brand-new construction with every modern convenience after the couple moved back to Dallas from San Antonio. She was more interested in a Craftsman bungalow. “We were not having a meeting of the minds at all,” Pam says, “but it was an epiphany for him.” Today, the Simmonses love their midcentury modern, which saw a painful failed attempt at a remodel before Pam brought in homebuilder Roger Lawrence to help her get things back on track.

“It still feels like a midcentury home, but it’s been made current without being too trendy.”

The home also benefited from the expertise of interior designer Breck Woolsey, who handled everything from paint and tile selections to lighting and furniture choices. “At first it was a smaller project to redo just the kitchen and master bedroom,” Woolsey says. “But during the process it turned into a full remodel,” which included gutting the entire house to the studs, remodeling every room, adding 150 square feet of living space, and redoing the pool and all of the landscaping. “Before, it was a dated midcentury home that needed a little bit of TLC. Now, it still feels like a midcentury home, but it’s been made current without being too trendy.”

At a modest 2,900 square feet, the 1964 house on a cul-de-sac in Valley View is surrounded by woods ribboned with creeks. It’s a sanctuary for Pam and Gary, who work technical jobs that require extensive travel, and it’s filled with an eclectic collection of art and decor that Pam amassed over many years: a signed paper collage by American artist Harry Bouras dated 1973, an old Navajo rug purchased in New Mexico, a plaster bust from a Paris flea market, paintings by UK artist Jack Valentine, and so much more.

Woolsey, formerly of design firm Breckinridge Taylor, has worked on residential and commercial projects from California to Martha’s Vineyard. He and Pam both shopped frequently at Antiques Moderne; owner John Bacile introduced the two. The designer says he found it refreshing to work with a client who trusted his vision and who already owned so many beautiful things: “It was a little overwhelming at first—even for her. She loved collecting this stuff but then didn’t know what to do with it all.” While searching for unique pieces to integrate and update, Woolsey helped Pam edit her collection to create synergy and the aesthetic she desired. “This enabled the newly remodeled home to also feel collected and timeless,” he says.

Sure, there were times that it stung a little to let something go and times when Pam admits she needed her designer to help her dial back her enthusiasm a bit, but “I totally trusted him,” she says, “and I always listened to him and followed his direction because that’s why I hired him.” Woolsey also guided Pam toward a few new additions to her already-impressive collection, including several large photographs and numerous other pieces of art and furniture.

In the end, the remodel reflects the history of the house as well as its unique owners and the way they want to live. “You walk in and you see Pam all over the place,” Woolsey says. 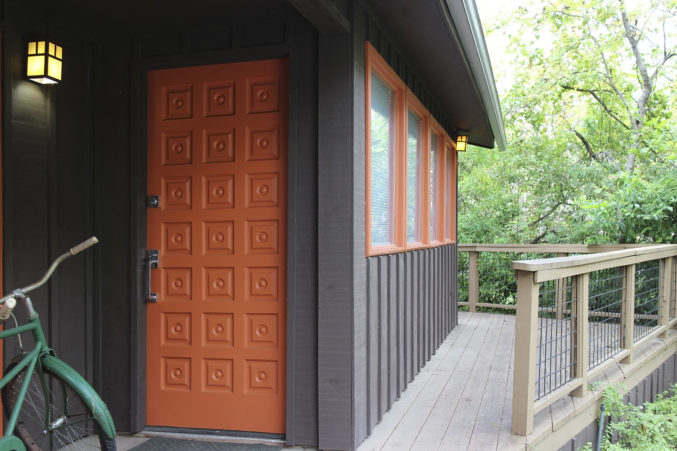 A failed hunt for a vintage door led Pam Simmons to a new venture.

Like so many businesses, The Passage was born of necessity. When Pam Simmons was remodeling her midcentury home, she found a vintage door that she loved—but she wanted two. Unable to locate the door’s mate, she hired woodworker Francisco Martinez to create it for her. Simmons was so happy with his work—and so frustrated with the marketplace—that she partnered with Martinez to launch The Passage to provide other homeowners with what she calls “elusive doors.” The company sells five classic models, each made of solid wood and inspired by front door styles from the ’40s through the ’60s. Simmons named the doors—geometric wonders that look beautiful stained and striking painted—after streets that her parents, grandparents, and in-laws lived on through the years. The Passage also offers a custom door design service for homeowners who don’t see just what they’d like and ships anywhere in the United States.