World-renowned interior designer Michelle Nussbaumer‘s  approach to hosting is the same as her approach to design: More is more. “Once you [set out to have a party], I’m of the mindset that you might as well invite as many people as you can,” she says. “My dining table sits 22, so I like to have 22.”

Having hosted since her days at SMU, when she would cook pot roast at the request of her friends—“I think it was boys who missed their moms,” she laughs—Nussbaumer is now a seasoned pro. She effortlessly puts together interesting, collected tablescapes in the blink of an eye, deftly blending pieces from every corner of the globe with big-box scores from the likes of World Market and Anthropologie. Each creation is like a United Nations of entertaining: An Uzbekistani suzani is topped with her line of Mexican delftware, antique French silver, a Chinese vase, and American pressed-glass stemware, while another table draped in silk pieced together from 18th-century Indian saari borders plays nicely with glassware spanning Mexico, Sweden, and France. The key to achieving a harmonious balance, she insists,
is to excite all the senses—and simply have fun.

“I love doing the table,” Nussbaumer says. “It’s so fun to me. I hardly ever do it the same way twice.” 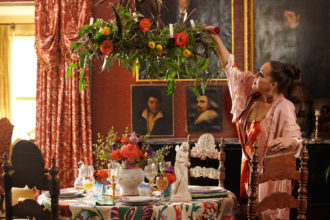 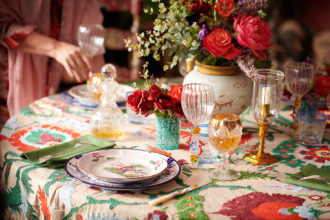 Elizabeth Lavin
Decorate Up Nussbaumer loves to accentuate her chandeliers with flowers and fresh greenery.

Michelle’s Tips for a World-Class Fête

Shop Your Own Home
While Nussbaumer loves fresh flowers, she encourages hosts to incorporate other items into their tabletops. “Use objets from around your house,” she says. “It could be anything, whether it’s something pretty from Pier 1 or a Tiffany box.”

Maximize Your Floor Plan
When hosting a more intimate gathering, Nussbaumer likes to think outside the dining room for an unexpected twist. “It’s fun to put the table in a different place,” she says. “You could set up a card table in another room with a pretty cloth.”

What’s Old is New Again
Don’t keep your grandmother’s china collecting dust—give it a fresh perspective by stacking it with more modern pieces. “Mix it with something more whimsical to make it your own,” she says. “Salad plates are a great thing to start with. They’re inexpensive and can make the most boring white plate interesting.” Anthropologie is a favorite source of Nussbaumer’s: “They always have fun salad plates and usually kind of limited editions, which is nice because then not everyone has it.” 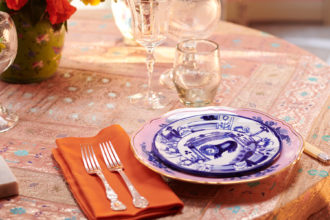 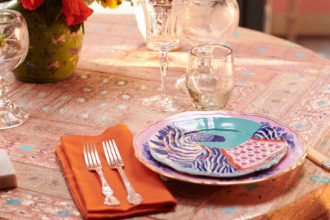 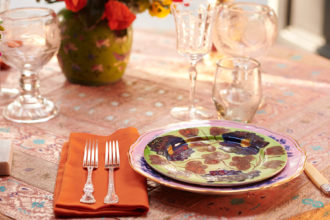 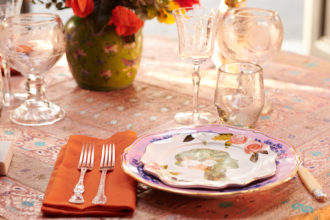 Elizabeth Lavin
Endless Options Nussbaumer isn’t afraid to mix high-end pieces with more accessible ones for a custom look. Here, she shows how the same Richard Ginori plates are transformed when topped with a variety of patterned salad plates.

Outsource for Ease
Though Nussbaumer loves to cook for her parties—lamb tagine and lasagna are in her regular rotation—she knows not everyone has the time. But she insists that it shouldn’t stop you from hosting. “Get prepared food from Trader Joe’s or a to-go place and plate it in a pretty way,” she says. “Then everyone can throw together a salad.”

Host a VIP-Only Affair
Nussbaumer acknowledges that we often save our best efforts for large parties and shortchange those most important to us. “There’s just no one more important than your own family, so it’s great to do something special just for them,” she says. She created an elegant table for two in her entry, the perfect romantic upgrade to a mid-week meal. “How happy is any husband that comes home and you’ve done something special like that?”

Remember: Fun is Contagious
Nussbaumer says the easiest way to ruin a party is to be stressed; your guests can sense it. “You should be having fun,” she says. “If it’s not fun for you, it’s not going to be fun for anyone else.”

Resources: Napkins on both tables: World Market; salad plates at bottom right on entry table: Anthropologie; all others: Nussbaumer’s own