When David and Ana Maria Benitez moved from Monterrey, Mexico, to Dallas 13 years ago, they never intended to stay that long. “We were supposed to come for two [years] for my husband’s work,” Ana Maria explains. “David started his own business, my kids started school, and here we are.” Dallas is now home, but that doesn’t mean they don’t miss the sights and sounds of Mexico. So they did the next best thing to moving back: They built a dream home inspired by Monterrey.

The couple knew there was no one better to help them than interior designer Gonzalo Bueno of Dallas-based Ten Plus Three. Bueno, who also hails from Monterrey, is a close friend of David and Ana Maria’s from college. He understood the kinds of native touches the couple wanted in their home, but he could also speak to the Dallas landscape.

Bueno can also take credit for convincing Ana Maria and David to purchase their lot, a heavily treed patch of land that overlooks a creek. At the time, the family was living in another modern home designed by Bueno, but they wanted more of a connection to nature.

“Monterrey is surrounded by mountains,” Ana Maria says. “Every window you look out, you see green.”

“They wanted social spaces that are very open, more public. But the private spaces are very private.”

On a Sunday drive, Ana Maria asked Bueno if she should buy the lot. His friendly advice? “ ‘Yes! Buy it! What are you thinking?’ ” And he was right: There was enough land for their 6,000-square-foot home, as well as an infinity pool, outdoor entertaining spots, and green space for the kids to run and play.

As for a builder, Bueno knew that the challenging three-year project was perfect for Chad Dorsey and Kurt Bielawski of More Design + Build. “The design has a lot of elements that are not your normal ones,” Bueno explains. For instance, the lot is located on a floodplain, so the More team had to build a plinth atop which the house would sit. “It was really a jigsaw puzzle,” Bielawski says. “The design process was well-thought-through to get everything in.” The limited surface area for the house meant that most major decisions had to be made on the front end, so assembling the expert team of designer, architect, and builder was crucial.

And luckily for the team, Ana Maria was a confident decision maker, blending her favorite ideas from Monterrey and Dallas. In Mexico, the master is typically located upstairs near the kids’ rooms. “It’s a culture thing,” Bueno says. “We’re very used to having the bedrooms private from the rest of the house.” Guest quarters and flexible entertaining spaces were also must-haves. “They wanted social spaces that are very open, more public. But the private spaces are very private,” Dorsey explains. 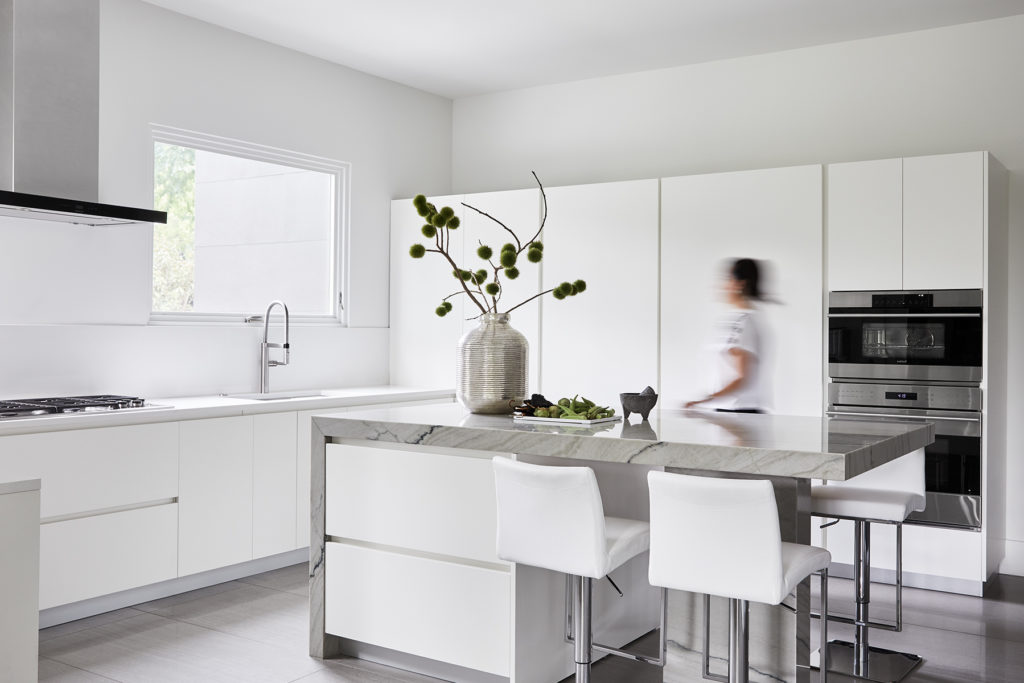 The kitchen cabinets are Poliform Varenna, and the silver vase is from Wisteria. “We did lots of interesting lighter stone details on the bar and kitchen,” Bielawski says. “That’s another way to bring a warm feel to a cool project.”
Cody Ulrich

Ana Maria did, however, lean into the American concept of an open kitchen and family room rather than the tucked-away kitchen that is common in Mexico. “Gonzalo came up with the huge pocket door that we can completely close when we need to. And then we open the pocket doors to integrate with the family the way the Americans do,” she says.

Because Bueno was involved in decisions from the beginning, the interiors fell into place organically. It also didn’t hurt that the couple owns an expansive Latin American and Mexican art collection. “That’s what makes projects more fun and have more character—when the clients have some things so you can mix,” Bueno says. Mexican-inspired touches are in every room: The custom branch front-door handle was made in Mexico; suede pieces in the study pay homage to Ana Maria’s family’s leather tannery; and butterfly motifs are integrated throughout, which remind Ana Maria of the monarch butterflies that migrate south every winter.

When walking around the grounds, the oak tree leaves rustle and birds chirp. There’s no sign of highways or tall fences. You can just imagine the family feasting on paella and jumping into the pool for an afternoon dip. For a moment in time, you do forget you’re in Dallas. “We wanted to bring a little bit of Mexico to the U.S.,” Ana Maria says.