Known for his sleight-of-hand blend of velvet, chrome, brass, and Lucite, interior designer James McInroe has built a career out of creating deeply dramatic interiors. In the Dallas-based tastemaker’s hands, boldly patterned accents play off cool neutrals, and midcentury classics cozy up with sexy ’80s icons. This juxtaposition of color and era comes naturally to the Fort Worth native, who was destined for a career in interiors from an early age.

“I would always go into a room and organize it, even as a young child,” he recalls. “The contents may not have been wonderful, but it always looked better when I left it than when I came in.”

After developing an Architectural Digest habit as a teen, McInroe went on to earn a degree in design from Texas Christian University. After graduation, he spent more than a decade at firms in Fort Worth and Dallas before striking out on his own. With a side business of selling restored vintage 20th-century furnishings, McInroe maintains a warehouse of treasures ready to reinvent his client’s abodes. However, the designer is not one to suggest that anyone should start over from scratch—if you’re collecting in the right way, there’s always a new spot for an old favorite. 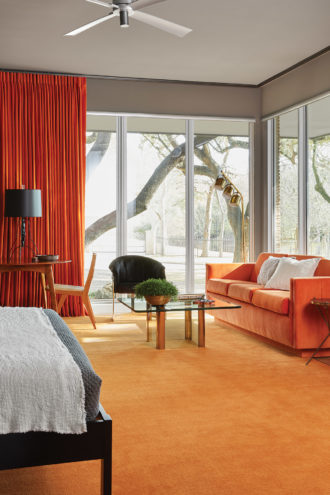 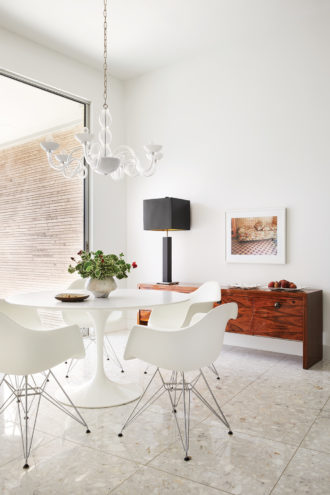 Cody Ulrich
Left This sophisticated space is one of three sleeping suites created for the family’s teenage sons. The sofa is Milo Baughman and the drapes were made from matching Duralee fabric. The coffee table is 1970s Pace, and a 1950s African mask lamp sits atop a Russel Wright wood table from the same decade. The throw on the bed is from Mecox.; Right In the breakfast room, a modern Knoll Saarinen table and Charles Eames chairs mix with a 1960s rosewood Roger Sprunger for Dunbar buffet. The marble vase on the table is from ContextVintage via Chairish.

“One thing I’m very good at is taking a client’s existing furniture and moving it around in a new house and giving it new life,” he explains. “I make an existing inventory with photos, then we start to fill in the blanks.”

For longtime clients who found their dream house in Preston Hollow, McInroe took this philosophy to heart. Designed by renowned architect Hal Anderson in 1959, the 6,271-square-foot home was expanded in 2016 with the addition of a new master suite. Possessing incredible bones, the residence has a sleek midcentury vibe that would fit right in among the architectural treasures of Palm Springs.

“I wouldn’t call this a Hollywood Regency house, but it’s got traditional elements with a modern expansiveness,” muses McInroe. “You could even picture [Frank] Sinatra living here.”

Opting for a neutral palette throughout the common spaces, McInroe made the most of the client’s existing pieces, adding and refreshing where it made sense. A built-in buffet in the dining room was reinvented with bronze mirror panels, while a well-loved sofa received a sturdy recovering in Perennials velvet for its new home off the kitchen.

An antelope-print rug from Couristan that formerly lived in a master bedroom helped anchor the expansive living room (with the addition of a larger companion sourced by the designer). The ring-a-ding-ding heart of the home, the vast space was then divided and conquered by McInroe into three separate seating areas that are sized just right for a tête-à-tête.

“To try and pull this together in one seating group wouldn’t look interesting,” the designer explains. “And it would be impossible to use in a cocktail-party situation. If you’re entertaining 10 or 20 people, [the seating arrangements] give people the opportunity to get away from each other.”

For the client’s three teen sons, McInroe created separate studio suites, furnishing them with refined accents such as a Fornasetti-tray-topped accent table and a brushed aluminum credenza by Pierre Cardin. Even areas like the playroom and the pool house family room feel decidedly grown up. 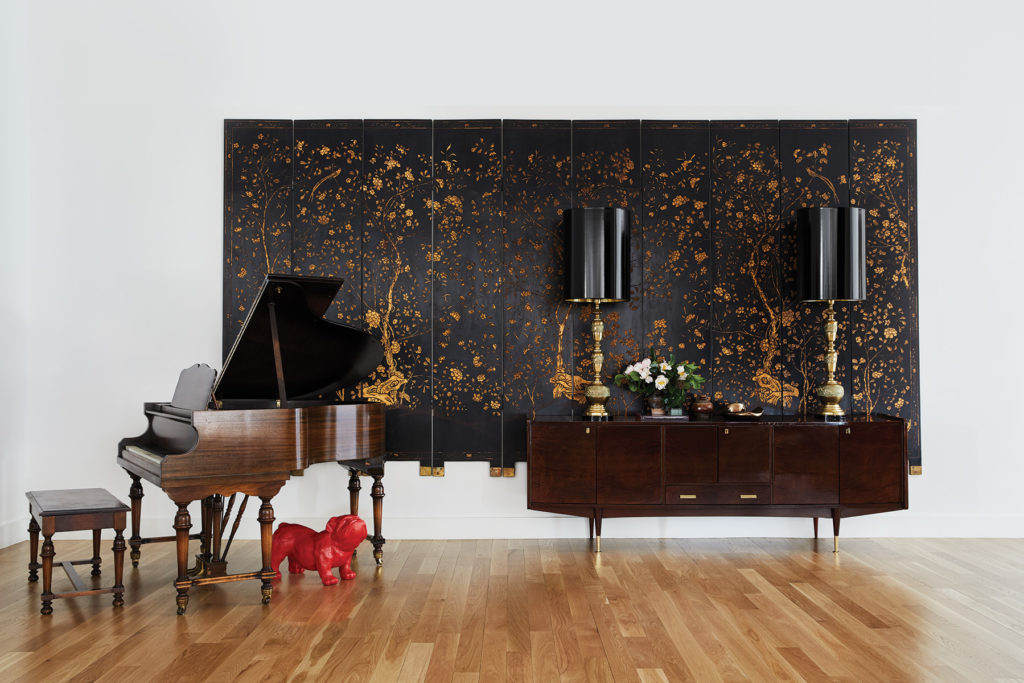 In addition to the three seating areas, the expansive living room was large enough to accommodate the client’s piano and a 1950s Italian buffet. “It’s giant,” McInroe says of the room. “You could fit a small apartment in it.” The brass, Asian-inspired lamps are vintage, while the screen and bulldog sculpture are the client’s own. The small marble box is from Sputnik Modern.
Cody Ulrich

“It may depend on the mind-set of the parents, but to me, it makes perfect sense to not buy a bunch of stuff you’re going to eventually throw away,” he says of the urbane environs. “Not everybody would do it, but in this case, she’s sophisticated and is making an investment in pieces she’s not going to have to buy again.”

When viewed together, the rooms are inviting and impossibly cool, glamorous yet liveable—a mix that doesn’t seem like it would work, yet it does—in spades.

Says McInroe matter-of-factly: “I don’t do anything intentionally to shock or be trendy or what have you. I look at what’s going on in the house and the house itself and do what I can to accentuate what’s good and hide what isn’t.”

Amber Perley Chats with Courtney Kerr on D: The Broadcast