Ask interior designers Ashley Avrea Cathey and Mary Beth Wagner to describe their design style, and they can’t put a finger on it.

“It’s more of a feeling,” Wagner says. In the case of Amanda and Nick Sunderman’s Highland Park Mediterranean, that feeling translated to light, fresh, comfortable, and downright cool. “They are young, hip, and happy,” Cathey says. “I think we nailed it on their personalities.”

“We knew we would have more kids, and I wanted each space to be usable.”

The fun-loving 30-somethings are an enviable pair—Amanda counters Nick’s energy with her easygoing nature. Both have an eye for good design: Nick is a sports marketing entrepreneur with an affinity for collectible kicks and owns Mockingbird Station sneaker shop Centre as a “creative outlet.” So it was obvious at the outset that the home with the coveted double lot and impressive architecture—which managed to lure them from their beloved Bluffview—would need a refresh. The beige-tan-washed interiors with dark woods and minimal natural light were just plain vanilla.

“We had remodeled our last house in a lot of neutrals, so I knew when designing this house, I wanted to use more color, texture, and patterns and to not play it as safe,” Amanda says. They also aimed for family-friendly areas that would allow free reign for their two-year-old son, Hayden, and their daughter, expected to arrive in November. “We knew we would have more kids, and I wanted each space to be usable,” Amanda says. They turned to the Avrea Wagner duo along with Dallas architect and longtime friend Christy Blumenfeld of Blume Architecture and C+M Services, the original homebuilder, for renovations. 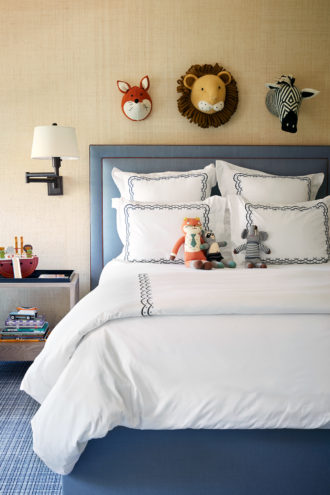 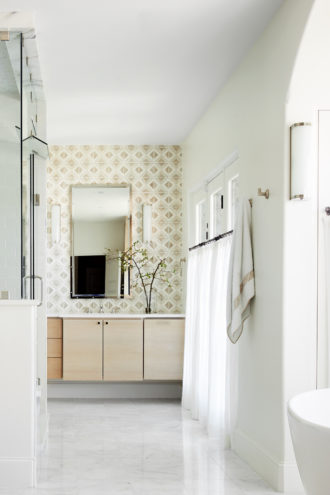 The project soon snowballed into a “major gut job,” Cathey says. They took the kitchen down to the studs, revamped each of seven bathrooms, and repainted and papered the entire home. To fit the couple’s growing family, they added a master suite and an additional bedroom over the patio, which was ingeniously enclosed to create a more usable indoor-outdoor room. “We wanted it to feel cabana-ish and casual—like a back house,” Cathey says. Concrete Italianesque columns were demolished to make way for sliding steel doors, and stucco walls were papered in bold striped grasscloth by Phillip Jeffries.

“They let us be creative and take the lead, and it was such a treat to push the boundaries.”

With the reno complete, Cathey and Wagner formulated ceaselessly striking color combinations in furnishings and art. Gilded and neon-yellow Urban Electric Co. chandeliers over the kitchen island hold a commanding place over Palecek bar stools in vibrant fuchsia Pavoni leather. In the dining room, a framed Burberry scarf from the 2016 runway collection, which the designers found, pairs with Porter Teleo green and yellow drapery. The family room is papered in sage and cream Phillip Jeffries “Fade” paper. No hues were off limits. “They were able to mix so many different things that catch your eye—things I never would have thought to pair,” Amanda says. 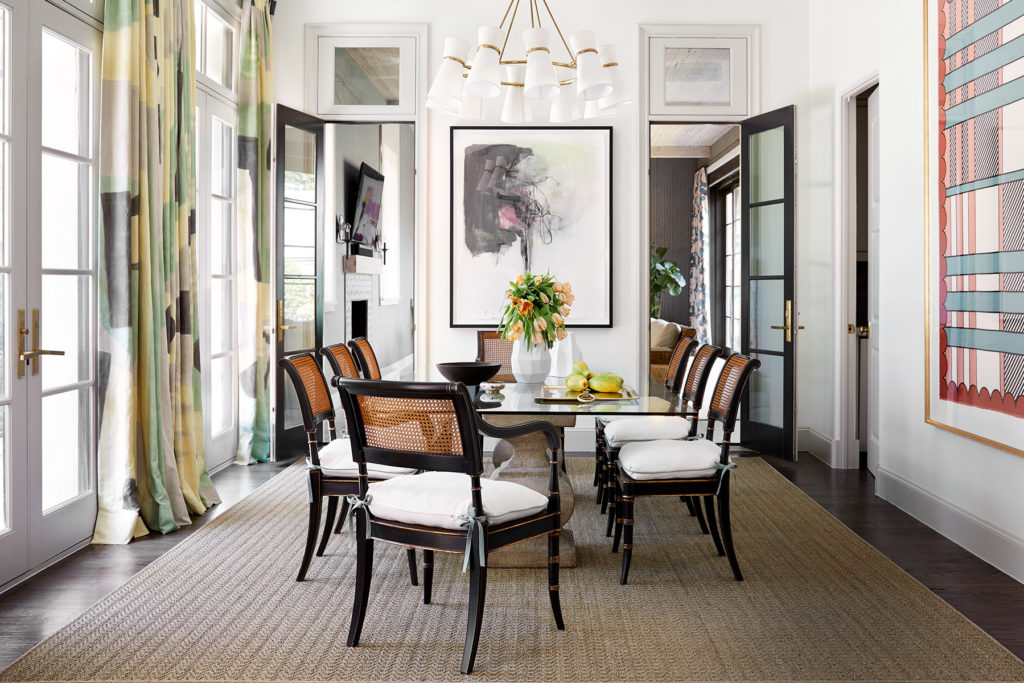 While Nick left most of the decision-making up to Amanda, he did dictate his shoe closet scheme, cleverly orchestrated by Blumenfeld to hold his 600-plus sneaker collection, which you can read more about on this page. The closet is just an example of how the couple’s home reflects their personalities—cool, edgy, and even a little preppy. “They let us be creative and take the lead, and it was such a treat to push the boundaries,” Wagner says. “It’s a home that truly reflects them.”