A seventh-generation Texan, Cowden Bell grew up working with his hands from an early age. By the time he landed at the University of Texas, he had moved from fine art into “amore per la pelle” (or in Italian, a “love of leather”).

Mining thrift shops for discarded leather coats and bags, he repurposed the cowhides and coats he found to create garment and gym bags so enticing, travelers would buy them off his shoulders in the middle of a busy airport.

A retailer by trade—Bell has owned six different shops over the years—it wasn’t until he moved to New Mexico in the early ’90s that he began working with hides full time. A fortuitous meeting with master leather craftsman Elliott Hampton led to five years of study, with Bell refining his skills in tooling, stamp work, and dyes.

Shortly afterward, a design firm from back home came calling with an offer that Bell couldn’t refuse.

“They wanted me to do a big project for Walt Disney. We did paintings on leather: Indian dresses of deerskin, leather bags, and menu covers. It put me on the map, and I got to represent a lot of artisans’ work,” he says. 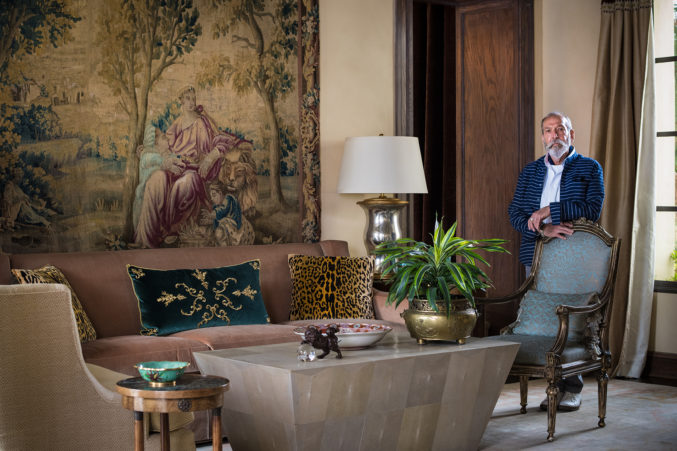 “We went for zero dollars to a lot, which made the furniture more exposed. Since then, we’ve had slow and steady growth, like a turtle,” he says. “I like going slowly but surely, and now we’re expanding next year in a much bigger way.”

At his headquarters in Weatherford (a locale that allows Bell to keep his menagerie of animals and his peace of mind), the designer and his craftsmen use Italian leather and exotic hides for their standard line, as well as for custom work for local, national, and international designers and architects. Bell plans to double his 2,500-square-foot studio and establish an online shop in 2019.

“I’ve had the retail experience, and it still excites me,” Bell says. “It’s so expensive to do a brick and mortar, but opening a retail store on the internet will satisfy my craving and express myself through design. It’s an acceptance of us as a true, bona fide line of high-end craft wares, whether it’s a sofa or an art box.”