Enjoy unlimited access to all of our incredible journalism, in print and digital.
Subscribe Now
Advertisement
Highland Park

Austin and Megan Curry work with designer Jacklyn Caveny to design a home that is as much about nature (and Gucci) as it is about nurture.
By Ryan Conner | September 10, 2018|9:42 am
View Gallery
View Gallery

On any given Sunday afternoon, peek into the Curry home, and the family of five is gathered in the living room, a Steinway Spirio piano self-playing Cat Stevens’ “Wild World,” an Astier de Villatte cat incense holder burning, and the three kids, Clive, Caspar, and Colette, relaxing on the custom velvet poufs. “This is our chill time when the week is crazy,” Megan explains. “When you turn on the piano, everyone just chills.”

The home is indeed a sanctuary for the couple and their kids. Austin works as a trial lawyer and Megan, a geologist, still dabbles in freelance work. When they join up at home, they wanted every square inch to be livable and comfortable. (But there are also elements of high design, especially with a certain family member’s affinity for Gucci—we’ll get to that later.) 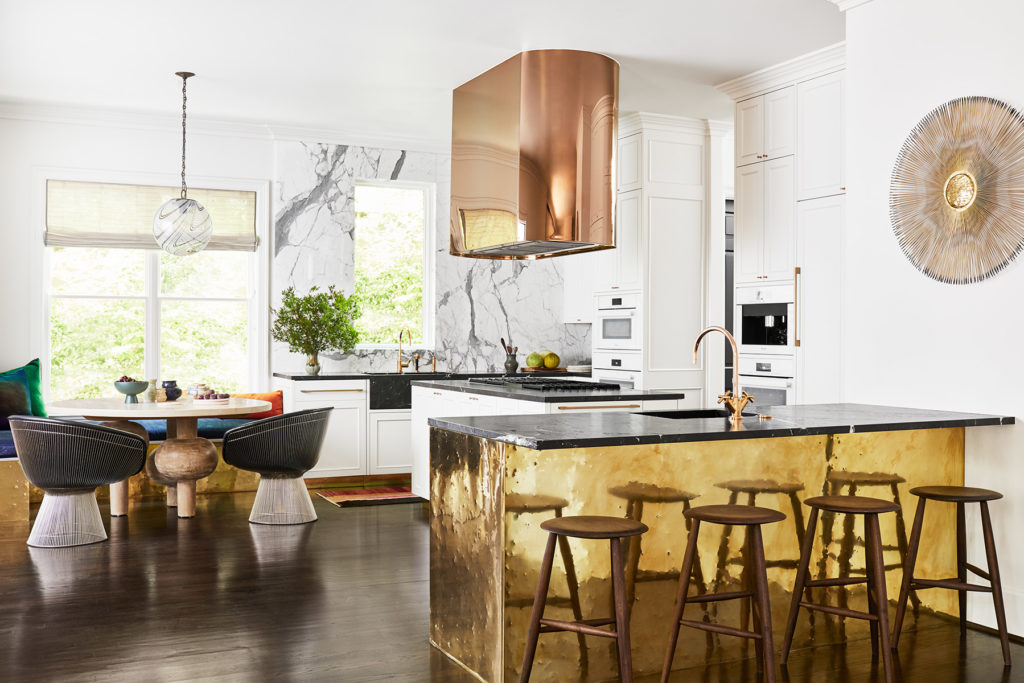 When the couple purchased the Georgian-style home, it needed quite a bit of gutting in order to fit their needs. In fact, every surface was touched—if it was not ripped out and redone, it was resurfaced and repainted. The Currys needed help with design decisions, so they hired Jacklyn Caveny, whom Megan met through a mutual friend. It was an instant design match: “I could tell that we were going to be great just by looking at her flowers,” Megan says. (The multitalented artist/designer has a hand in an array of artistic ventures, including designing floral arrangements for close friends and launching Casavibe, a design studio and custom line she started with her design partner Hilary Cornell.) The two bonded over their love of nature and animals and quickly got to work.

“It’s so cool that again there’s this thread of nature in everything.”

With the Currys’ lifestyle driving the design process, Caveny had to work toward a trifecta—spaces that look effortless and luxurious while also serving a purpose. Tea parties take place in the dining room. Kids are invited to hang in all areas of the house (Colette prefers a velvet sofa in the master). Also in the aforementioned living room, the piano does get used (Austin loves to play), the antique desk doubles as an art space for Caspar, and the custom “velvet mushrooms” are soft spaces for children to land. “As it evolved, Colette, the baby, was coming, and Austin wanted a place to literally lie down and snooze with the baby,” Caveny says. “That sort of drove the direction of the room.”

And when it came to the nature aspect, Caveny was happy to oblige in the couple’s request for animals, animals, and more animals. “I did biology, geology, and natural science so nature has always been a passion,” Megan explains. “I get excited about any piece that has that feel.” Caveny tells a life-imitating-art story while the two were working on a custom Gracie wallpaper for the powder room. As they were finalizing the design—which includes birds, dragonflies, caterpillars, butterflies, and a pair of frogs that represent the couple—Caveny was visiting her farm in Tennessee. “I was in the garden, and I looked down and there’s a caterpillar and a butterfly,” she says. “I was thinking, this is what we just did on the panels!”

But there is one area in which Austin and Megan don’t exactly see eye to eye: “He’s a much more stylish dresser than I am,” she says. “I’m in a black T-shirt every day, and he’s Gucci head to toe. If it were [up to] Austin, it would be Gucci everything in this house.” Lucky for him, Gucci’s home collection offers opulent animal motifs, which are seen on throw pillows on a settee near the kitchen and on the couch in the living room.

And each child has his or her own territory, too—environments built for play and relaxation. Hidden on the second floor is a “secret” door that only tiny bodies can crawl through. It leads to a room where all the playthings are stored. The bedrooms are void of clutter, allowing for a clean space to relax and sleep, with of course, hints of a forest theme in the boys’ room. “It’s so cool that again there’s this thread of nature in everything,” says Caveny. “Megan loves it, and I love it.”

A local designer walks us through the creation of a fantasy room for kids.
By Joslyn Taylor
D Magazine Directories