Loyal fans of The Adolphus Hotel’s French Room  won’t be disappointed with the recent renovations. The much-awaited unveiling of the iconic dining room is set to take place this fall, returning to the space’s original splendor—with an upgraded bar and salon to boot. The Beaux Arts–style hotel opened in October 1912—at a hefty cost of $1,870,000—and the French Room has been a luxurious dining destination ever since.

“It shows so much history,” says Samantha Sano, owner and principal creative director at Swoon the Studio—the multidisciplinary design firm charged with the hotel’s massive overhaul. (Swoon also reworked other areas in the hotel, including communal spaces such as the registration lobby, upper lobbies, the lobby bar, and City Hall bistro.) The last renovation took place in the 1980s, when the cherubic murals were added to the French Room. “Everyone thinks those murals are original—they are not. Some of them were even wallpaper,” says Joslyn Taylor, principal of interiors at Swoon. “We wanted it to feel French—as opposed to ‘Disney French.’” In its place is carefully chosen Venetian plaster. “This is how the room originally was,” Taylor adds. “We spent a lot of time looking at French plasterwork and architecture.” And yet the newest iteration is a perfect marriage of the original space and the famous 1980s version—the gold trim remains, giving the plaster a nice pop and adding to the room’s Old World feel. 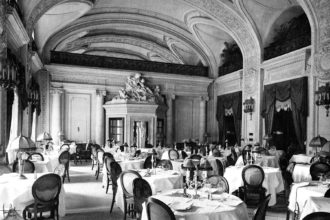 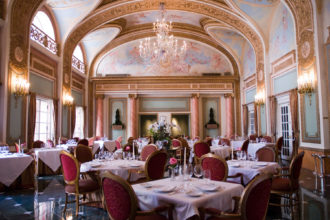 The result is a bright, clean space that still manages to be ornate. The cotton-candy colored chandeliers—which Swoon designers refurbished and lowered—now sparkle against the creamy, wedding-cake white walls. “When the murals went away, to us, the chandeliers became the stars of the show,” Taylor says.

Bring it on home

Swoon shares decor tips for your own abode

Begin with things you love.
“Designing your home is a reflection of who you are,” Taylor says. “Start with things that bring you joy as opposed to recreating a room you saw on Pinterest.”

Look for classic shapes.
Taylor especially loves a good roll-arm sofa and tufted details. “Then maybe play with color to make it feel more current, but not necessarily trendy,” she says.

Step away from the computer.
“Pick up a magazine from 10 years ago,” Sano suggests. “Pick up old issues of Metropolitan Home. I also love European magazines, like Vogue Living.”

Cut the trends off at two.
“Identify the trends, and pick two—then mark the rest off your list,” Sano says. “If you feel like it’s going to end up at Target, you should stop yourself.”

Throughout, a mix of old and new creates a modernized and yet still traditional space. The chairs have been recovered in Kravet faux ostrich and Jean de Merry silk; mirrors from the lower lobby have been moved into the grand room; an iridescent, handpainted Calico wallpaper lines the ceiling in the side dining area; the green marble floor has been honed to soften the harsh shine; custom velvet banquettes create intimate dining areas; tulip-base tables and a custom marble service console add a modern touch; clean-lined china echoes the chandeliers’ soft tones; and 20th-century pendants from Viennese manufacturer Woka add to the European aesthetic.

“The creative director at the time really pushed us to look to Europe for inspiration,” Sano says. “It helped push us out of our normal comfort zone.” 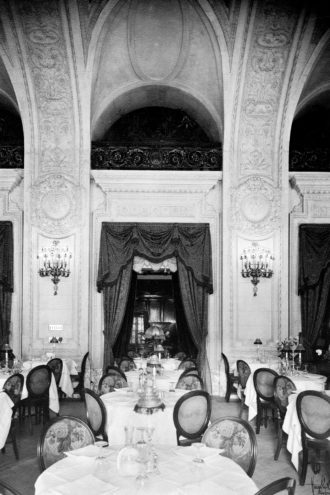 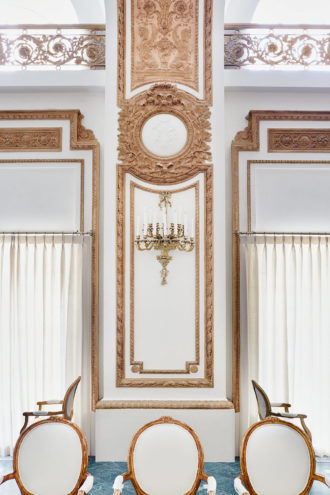 Despite all these glitzy attractions, the space isn’t just about the French Room; Swoon created a transitional experience for the visitor by redesigning the adjoining salon and bar, two additional spaces to float between. The salon is the predinner cocktail, if you will. For those who don’t want to commit to the French Room’s multicourse dining experience, visitors can order drinks and appetizers from a paired-down menu. Its tall, wood-paneled walls add a moody feel to the sumptuous, velvety pillows in feminine, yet more saturated, tones. Tables from David Sutherland and Randall Morgan mix with custom-tufted ottomans from Paloma Creations. The area is a salon-style art gallery in its own right, curated by Lucia Simek and filled with pieces from Texan artists [see sidebar]. The piano and chandelier, though, remind guests of the hotel’s storied past—as does the original marble floor, which was a pleasant discovery during renovations. “We’d seen a lot of pictures of the early space, and we knew that there had been a marble floor,” Taylor says. “They ripped up the carpet … and, oh my gosh, they found the marble floor.”

And that’s exactly what the rooms are meant to do—simultaneously create a unique experience and yet exist as extensions of each other. “You have to give people a reason to go experience something different,” Sano says. “You need to make each one its own destination.”