The family renovated the 1920s derelict home and transformed it into a fresh space that honored the myriad historic commission restrictions.
Cody Ulrich

Charlie French, ruddy-faced, wearing a white cotton gi and his prized yellow belt, enters the living room in short, careful steps, where his parents, Barry and Karen, and his younger brother, William, and sister, Hope, are chatting and drinking sparkling water with a guest. He’s 25, just back from a tae kwon do lesson and weary from a vigorous workout. We all are a bit weary, in truth. It is Friday, late afternoon, the end of a long week. But Charlie ramps up the vibe when he enters the space. Everyone pops up to greet him, offering hugs and smiling eyes, as if he were a soldier returning from a long stay in a foreign land. He’d only been out of the house a couple of hours.

Charlie has Down syndrome. The Frenches, coming back from 10 years abroad—eight in the U.K. and a couple in Finland—decided in 2015 that it was time to return to the States to make a home for themselves and, especially, for Charlie. They chose Dallas, Oak Cliff in particular, because of its diverse community and regional architecture. Also, Dallas has sunshine. In Finland, where the sun shines six hours a day in winter, Charlie suffered clinical depression exacerbated by seasonal affective disorder and for four years was barely able to get out of bed.

Depression and Down syndrome is a tough carry. His mother tried every therapy imaginable. Some watercolors and an art journal seemed to help. “Paint how you feel, Charlie,” she would say. “Tell me how you feel.” Every day, for years, he dipped his brush into the pot of black paint and smeared it all over.

Or he would create muddy combinations that ended up black. But his mother persisted. And one day, on holiday in Santa Fe, New Mexico, Charlie dipped his brush into a pot of yellow and made a line. And then green. And then blue. He has not stopped painting since. 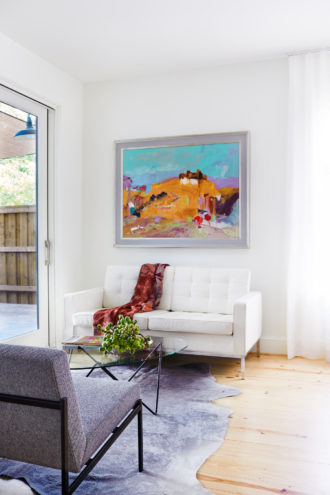 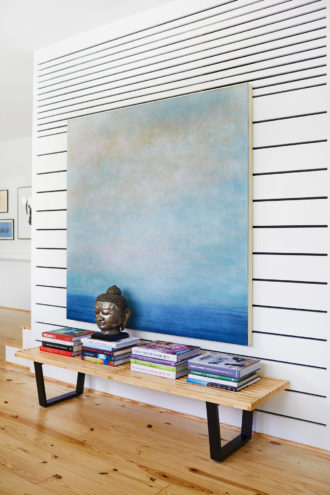 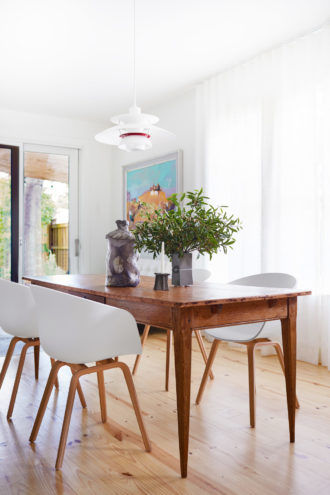 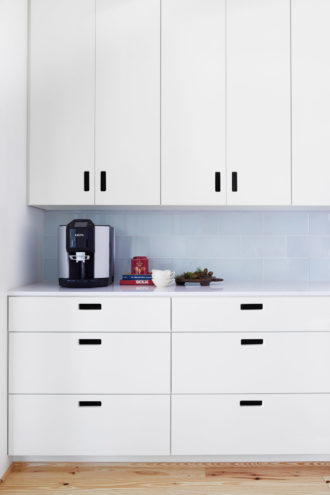 The Frenches knew that their new home would have to include an art studio for Charlie and accommodations for his balance issues and cognitive challenges. Few would have walked up to a dilapidated 1928 Craftsman house, barely standing, near iffy streets, and exclaimed, “This is it!” But Charlie is not the only member of the family with an imagination. The Frenches could see through the ramshackle wooden beast and hired designers Russ Peters and Bill Cates to create an exquisite space that achieves the impossible sensation of being both spacious and intimate. The kitchen is the centerpiece of the house, with an ample seating area, acknowledging what we all know: Everyone hangs out in the kitchen, no matter what. The kitchen space opens out to a screened porch that spans the width of the house and faces the swimming pool surrounded by spare, modern, intelligent landscaping. But most important is the backhouse, which was designed as guest quarters—and an artist’s studio. The key to making the 400-square-foot-studio work was light and openness. Charlie wanted a comfortable chair, so they selected one with wheels so he could move easily while he paints. Standing for long periods is a challenge. Charlie paints almost every day for one to two hours, or three hours on a good day. For someone with Down syndrome, where focus and attention is scattered, it’s a remarkable triumph and measure of Charlie’s inner force to create.
Cody Ulrich

The art studio is Charlie’s realm, a world where his physical and mental limitations do not apply. In London, a respected art teacher pulled Charlie’s parents aside and said that he was truly talented. She wasn’t just patting the back of a special-needs kid. Charlie, she told them, has a powerful ability to express himself through abstract art. Another teacher said, “My job, working with artists, is to set them free. Charlie is already free.” Following classes at City Lit London, he began art tutoring and became a part of Heart & Sold, a British nonprofit that supports artists with Down syndrome. He took part in their 2016 show at the Salford Museum and Art Gallery in Manchester.

The family is now happily ensconced in their lifetime home in Oak Cliff, with an art studio where Charlie paints almost every day until he becomes tired. Meanwhile, his very presence keeps this family awake to life’s different roads, darkness and light, and the impulse to hug someone you see every day for dear life, because he’s taught you everything that matters. Welcome home, Charlie.