“That must be a lovely spot. It’s west of here, isn’t it?

So goes this memorable line uttered by the spirited Katharine Hepburn in The Philadelphia Story, the movie that is playing silently on the screen of Angie Barrett’s new home in East Kessler Park. A lovely spot indeed. Barrett migrated west herself over the past nine years, from a One Arts Plaza penthouse to a Terrace House condo to this Kessler contemporary—and could not be bubblier about her new digs.

“When I walked in, I thought, ‘OK, I could see my art here.’ I loved the openness. I loved walking in. It felt so Melrose Place—I instantly loved it,” she says. Barrett and James McInroe, who met more than a decade ago when she hired him to update her daughter’s bedroom at their Beverly Drive home, got to work. Barrett says she wanted to get back to warmth and glamour. The One Arts penthouse, which she sold in 2014, was “museum-ish; a perfect white box.” Terrace House was “starting to feel really small,” especially for Grace Kelly, her Cavalier King Charles spaniel. “High-rise living isn’t ideal for pets,” she adds. “Then I found this [last summer] and thought, ‘Let’s do it,’” she says. “I was so taken by the house that I walked the neighborhood a week or so later.”

Barrett’s street is a mixture of original ranch houses and new infill housing. Her home, which she shares with a special man in her life, a Dallas businessman, is reached through a gated modern courtyard with a pool. Inside, it’s a layered story and testament to her love of contemporary art, fine furnishings, travel, and fashion, where most pieces have a story, much like their colorful owner. 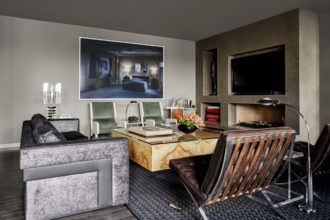 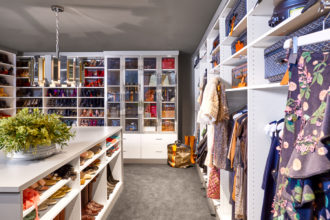 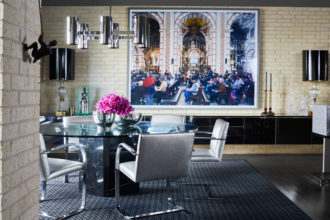 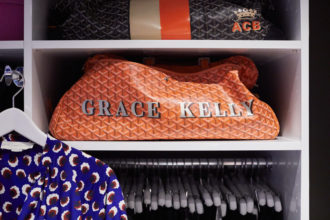 Take the green suede and ivory leather Gio Ponti armchair, where McInroe has perched on a recent evening. (“It’s really comfortable to sit in here; I have a strong reaction,” says McInroe.) It’s one of a pair of vintage pieces from Parco dei Principi Grand Hotel & Spa in Rome. Barrett bought them from Quittenbaum Art Auctions in Munich. “With the time difference, the auction occurred around 3:30 in the morning our time, and I was not fully awake. I totally underestimated the currency conversion and ended up buying the chairs for more than it would have cost to fly to Munich and buy them in person,” she says. The exterior leather was soiled, she guesses from the makeup of thousands of hotel guests. “Deno’s in Highland Park Village let me bring them in one at a time to remove the stains and dye them to their original color,” she says.

The whos, wheres, hurrays, and hallelujahs of life according to Angie Barrett.

McInroe describes the furnishings he and Barrett have selected as a “fluid collection,” with many of the pieces finding new life simply by moving rooms or functions. The circa-1970 Barcelona chairs in the living room, for instance, are at home wherever they land, he explains. “They started out black, but have faded to a gorgeous, rich brown color,” he says. “You couldn’t duplicate that now.”

The unabashed fashionista’s only problem with the house was the lack of closet space. A custom add-on and a California Closets install solved the dilemma. It’s also a haven for little Gracie, who has a private, automated entrance that opens to her custom dog run by Lorie Kinler of Redenta’s Landscape Design. It’s made complete by a wood and aluminum doghouse, purchased at a DIFFA auction. The door is activated by a remote chip on her collars. The pooch also has her own Goyard travel bag with her name proudly emblazoned. It is displayed with a dozen or so others in separate cubbies. (Barrett has been collecting Goyard luggage since the early ’90s and designed a custom red trunk in conjunction with Barneys New York and Maison E. Goyard in Paris.) “It’s my second favorite room,” Barrett says of the closet.

Her first favorite? The upstairs library, repurposed from an exercise room the previous owner had installed. “It kind of reminds me of Barneys windows when Simon [Doonan] did them: dark and decadent,” she says. In it, the shelves are lined with tomes on design, travel, and fashion with family and travel photos everywhere. “Angie has more Cedric Hartman lamps than anyone I know,” observes McInroe, referring to his client’s generous placement of the storied lighting pieces throughout her house. The office is outfitted with a pair of stainless steel Brno flat bar chairs in silver metallic leather from S.H. Frank Leather and a Milo Baughman desk, circa 1970, of olive ash burl with a chrome steel frame, all from McInroe’s collection.

Downstairs, additional silver Brno chairs surround an Italian oval glass dining table, circa 1970, with a black marble base and chrome cross-bar system. The open floor plan makes it immediately accessible from the front door. It’s the dining room light by Robert Sonneman, circa 1970, though, that has captivated McInroe. “It’s almost impossible to get that long, skinny shape just right,” he says. “It adds to the chic simplicity of the room.’’ Perhaps the heart of Barrett’s home design story is a pair of brilliant red lamps by Hervé Van der Straeten that she found in Paris while on a trip with her daughter, Alana. The monochromatic shade atop a lacquered base resembling a thorny stem is “the perfect shade of red, with the right amount of orange and really high style,” McInroe says. With them he paired a Vladimir Kagan armchair from Barrett’s collection that he revamped in vintage red patent leather and red mohair. “This red has followed me in every house since One Arts. I love it,” Barrett says. A pair of 1980s nightstands from McInroe and a custom black patent tufted headboard add a sexy finish.

Like the classic movies Angie loves, her home displays a sense of timelessness enlivened by contemporary art and her own joie de vivre. She and McInroe have created a red carpet–worthy final product—a collection as accessible and inviting as it is beautiful.