Christy Blumenfeld and her husband, Adam, had been looking for the perfect house for a while.

So long, in fact, that when Christy found her dream home and called Adam to tell him, he had forgotten they were looking. “When I drove up, I knew immediately that it was the one. I called my husband at work, and I said, ‘I found it.’ He said, ‘Found what?’ she fondly recalls. “I said ‘I found the house.’” This all before Christy had set foot inside. “I knew I could fix the house, but what I was looking for was a beautiful piece of property.” That day, the couple put an offer on the 1940s Greek Revival–style ranch that sits on just over two acres. 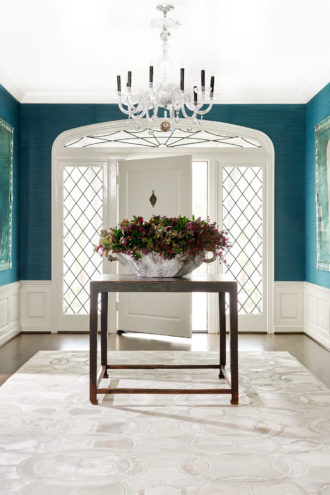 In the entry, a table from Allan Knight sits on a cowhide Kyle Bunting rug. The large vessel is from The Loveliest. The chandelier, which is original to the home, was edited by John Gregory Studios. The grasscloth wallcovering is Phillip Jeffries.
Nathan Schroder 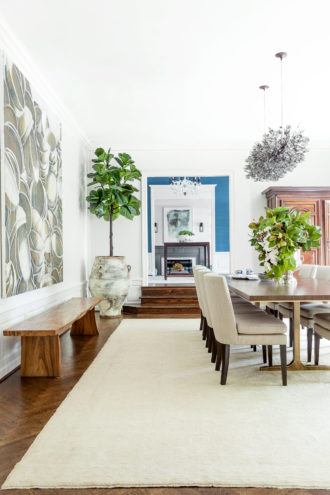 The night after they purchased the home, Christy, an architect and founder of Blume Architecture, and Adam, CEO of Varsity Brands, sketched the house renovations on a napkin. Shortly after, they started the eight-month remodel, which included taking the home down to the studs, apart from the dining and living rooms. Christy acted as the contractor and Adam as copilot: His idea was to add a 60-foot porch to the back of the house that allowed them to build a second-floor playroom, exercise room, and bedroom/bathroom. All in all, they added about 3,000 square feet, which also included a master retreat and sitting area that has a beautiful view of the backyard. But that was only phase one. Over the course of 13 years, the couple continued to update the home and grounds, choosing a new project each year.

“I knew I could fix the house, but what I was looking for was a beautiful piece of property.”

One of those phases was calling in interior designer Tracy Hardenburg to refresh the interiors. Adam wanted a more contemporary feel to the house, but Christy sought to keep the timeless nature of the home while remaining warm and cozy. When Tracy walked in, she immediately sensed that the home needed some updated furniture, along with bolder color choices. “I bought a really modern Kyle Bunting rug for the entry hall. [Tracy] said, ‘You can’t keep this modern rug with this old Ralph Lauren wallpaper,’’’ Christy says. Tracy talked a hesitant Christy into choosing a bright blue Phillip Jeffries grasscloth wallcovering that envelops the entry. In the den, swinging chairs by Kettal from Smink and a metal drum table from Ceylon et Cie offer up a place to relax with a view. They are styled with pillows from Mary Cates and Co., Ralph Lauren, and Calypso St. Barth. The sofa from Monarch Sofas is covered in Sunbrella fabric, the pouf and throw are from Calypso St. Barth, and the ottoman is made by David Cuellar. Wood boxes from ContextVintage rest on top. The rug is from Interior Resources.
Nathan Schroder

This back-and-forth push from Tracy ended up being exactly what the indecisive Christy needed. “She was wonderful about giving me five ideas in five options. She would narrow it down considerably,” Christy explains. They worked together on the entry, den, living room, and dining room, making some playful additions here and there, such as Kettal swings from Smink in the den that look out to the backyard. “She brought a lot of life into our house,” she says.

However, a few sentimental pieces remained, such as a dining room armoire Christy found on a work trip to France—the first piece of furniture she ever purchased—as well as her art collection, which includes works by her mother, Jackie Goode Briscoe. “I feel really lucky that we have always had art in our home because my mom has been generous to paint us whatever we want,” she explains. To showcase their collection, Christy and Adam set up a rotating artspace in their breakfast nook—a spot where they and their two children, ages 14 and 16, gather to eat dinner five nights a week.

For Christy, the house is her greatest project yet—a “labor of love.” It’s the place where her children have been able to run free in the wide-open spaces, put on musicals in the playhouse when they were little, and make memories baking in the kitchen with their mother. “It’s very hard if it’s your business to move into someone else’s design,” she explains. “I think people judge my ability to design for them based on how I personally live. That’s why I feel so lucky that I live here. I’m so proud of it.”