To an interior designer, finding a client who allows them full, caution-to-the-wind creative license is about as likely as spotting Bigfoot or being beamed up by a UFO.

But such a rare phenomenon materialized when designer Brant McFarlain met Cricket Griffin. When Griffin went looking for a designer to create something special of the 5,200 square feet of raw space that she and her husband had purchased in the Stoneleigh residences, she turned to popular home-grazing website Houzz. She scoured the site and narrowed her search to three designers, McFarlain being one of them.

“I liked his clean, not overly designed aesthetic,” she says. And when he told her he’d designed a unit in her previous building and it happened to be one she’d seen and loved, she said, “You’re hired!” McFarlain went for glamour in the dining room, selecting a custom table of ebonized mahogany wood on a mirror-polished stainless steel base. Bolier chairs in Dedar Milano’s Adamo & Eva velvet add rich color to the room. A pair of Arteriors “Imogene” chandeliers mimic the city’s twinkling lights outside. A French Art Deco buffet in Macassar wood is accented by a pair of 1950s Stilnovo sconces. The custom sisal rug from Interior Resources grounds the arrangement.

Shortly thereafter, the couple purchased the adjacent Unit B, picking up an additional 2,300 square feet for a combined 7,500 square feet of interior space. With its own elevator, Unit B, or “The Ballroom” as it’s now known, would hold her husband’s weekly poker games and other events, with a stage constructed for watching the couple’s six grandchildren put on plays.

Before the business of selecting countertops and gathering fabric samples could commence, the couple called in McFarlain to reconfigure the existing architectural plans. With the additional space, he would have to rescale and redesign the entire project, a process that would take three months.

While many designers would cringe at the idea of creating architectural plans virtually from scratch, McFarlain was unruffled. Early in his career, he worked on hotel projects in the Dallas office of megafirm Leo A. Daly and later for esteemed local architect Lionel Morrison, so he was sensitive to how architecture affects interiors. So much so that designing architectural features in the residence’s vast concrete hollow factored as the principal tenet—and the most impactful overall—in his design scheme.

McFarlain commissioned a steel and glass wall system to establish the dining room while still managing a view. In the kitchen, he dropped the ceiling a foot and framed out the space, encasing the upper cabinets to look like built-ins. He installed a pecky cypress coffered ceiling in the great room to add texture and prevent the room from appearing overtly slick. And then there’s the fireplace. “I wanted to create something monumental, but I didn’t want to use stone or wood,” says the designer. He worked tirelessly with third-generation fabricator Robert N. Wohlfeld to realize that monumental moment he was after—a wavy veneer achieved by sandblasting hammered brass to create the look of cast bronze. Requiring painstaking precision, the gleaming L-shaped panels took two weeks to install.

As incongruent as the mix of materials may seem, McFarlain pulls it off in a way that somehow just works—like salt on caramel. His client didn’t ever flinch or question his judgment. “I didn’t want choices,” says the homeowner. “I wanted him to say, ‘This is what I think we should do here.’”

“As an artist, there’s always that fear—am I doing the right thing?” McFarlain admits. His client, a fellow artist, didn’t share his apprehension. “I didn’t want to inject too much of my personality in it—I wanted to trust him,” says Griffin.

McFarlain’s attention to detail presents again in the groin-vaulted corridor connecting the two units, an element influenced by a trip he took to Prague. The plaster ceilings in the grand poker room and the library take their cues from linear Art Deco patterns.

While Griffin claims a miniscule one-percent contribution to the home’s design, her one percent makes one of the most significant statements. “I have a thing for doors,” she says. A wooden door she saw while traveling in Italy was reproduced as the entry doors to the main residence, and the homeowner put on her artist’s apron to design the arched iron doors opening into the second unit.

“In this home, you’re competing with the view, so I wanted to keep the interiors quiet.”

When it came time to furnish the home, McFarlain wanted to deliver the casual elegance Griffin was looking for while remaining respectful of the surroundings. “In this home, you’re competing with the view, so I wanted to keep the interiors quiet,” he says.

And make no mistake, in this residence, it’s all about those views: The great room, ballroom, master suite, a guest bedroom, and Griffin’s art studio enjoy an unobstructed view of downtown and the Margaret Hunt Hill Bridge; the bunk room looks out toward Love Field; and windows from the second guest room frame the treetops lining Maple Avenue.

Creating harmony with the interiors and the city outside meant blending modern elements with warm, texture-rich fabrics and materials. He selected an assortment of furniture with high-low price points. “We’re not fussy people,” says Griffin. In the living room, a Mitchell Gold + Bob Williams sofa customized by McFarlain and a pair of Jonathan Adler swivel chairs are joined by a breakfast table from CB2, forming a fashionable yet unpretentious arrangement.

In the master suite, he left an industrial concrete column but kept the space from feeling cold by covering walls in a Phillip Jeffries suede fabric and using wool to upholster the bed and create draperies. The designer reintroduces the steel and glass wall unit to partition the master bath and lavishes the walls and floors with slabs of Statuary marble. To maximize sight lines, he floated the vanity in the middle of the room and again called in Wohlfeld to create a pair of Karl Springer-inspired, ’70s-era makeup mirrors. The result is as breathtaking as the view from the tub. 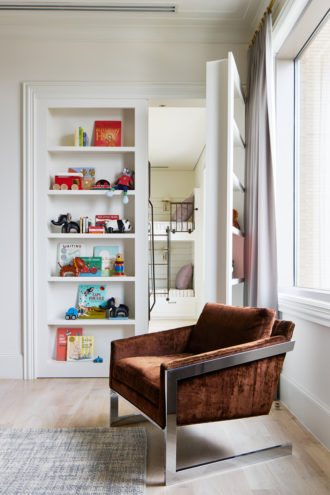 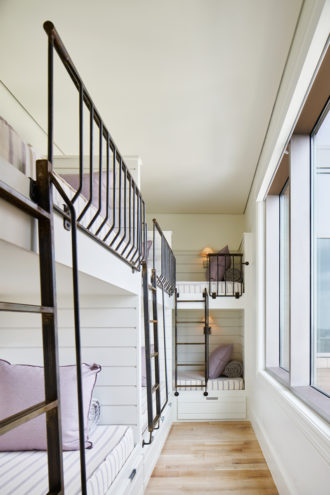 A bookcase offers secret passage into the kids’ iron-clad sleeping quarters. In the bunk room, he covered mattresses in Leith Stripe by George Cameron Nash and made clever use of rolled-up sleeping bags to serve as bedding—rolled out at bedtime and rolled back up without the hassle of making the beds.

For the playroom, McFarlain left serious behind, installing a bookcase with a second function as a Nancy Drew door that opens into the bunk room. He had iron frames fabricated in Crested Butte, Colorado, and outfitted the slender space with Ikea mattresses he upholstered in a ticking fabric.

Talking to the homeowner, it’s as if she can’t believe her good fortune. “I’m sitting here in this 1920s settee, looking at this hammered brass fireplace up to the coffered ceilings and over to the steel and glass wall. It’s perfect!” Griffin says. “Brant had really unique ideas that made this home as special as it is.”