A friend once  said to Ken Blasingame, “Someday, you’ll be designing the White House,” and he thought, “How could that possibly happen?” Imagine his reaction, then, when President George W. Bush and First Lady Laura Bush asked him to do exactly that: to take on the prestigious role of designing the first family residence. Though it wasn’t sheer surprise for the Texas native and established interior designer—he had worked with the Bushes since 1989, first on their Dallas home and, later, on the Texas Governor’s Mansion—it was still surreal. “No doubt it was very exciting,” he says. “There were a lot of ‘pinch me’ moments.” The White House’s Green Room, as it stood during George W. Bush’s presidency, was decorated in the Federal style. Most of the furniture in the room was attributed to New York cabinetmaker Duncan Phyfe; The Diplomatic Reception Room, as captured in 2009, featured French wallpaper selected by Jackie Kennedy and a portrait of George Washington, circa 1805.

The first came in 2002, just two days after the inauguration, at the project’s onset. “There was a huge warehouse—in an undisclosed location—of great historic furniture to draw from,” he says. In that secret vastness, he found himself scouring prized American furnishings: pieces Harry S. Truman purchased from B. Altman & Co. during his massive White House renovation. An American highboy chest former Presidents John F. Kennedy and Lyndon B. Johnson had used. It was a playground for Blasingame.

“There was a huge warehouse-—in an undisclosed location —of great historic furniture to draw from.”

Amarillo-reared, he studied art during college in San Antonio, when he found an early affinity for design and Spanish Colonial antiques. In 1973 he moved to Fort Worth, then launched namesake Blasingame Design in 1976. With a calm disposition, he was an ideal designer for the Executive Mansion for many reasons, if not only for his ability to intermix eras and origins.

Also an artist, Blasingame’s painterly design approach—of natural spontaneity—is one he shares with the former first lady who “wanted the residence to reflect that it was home to the leader of the U.S.,” he says. “She envisioned it to be appropriate and comfortable for guests and family.” 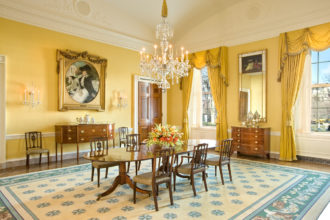 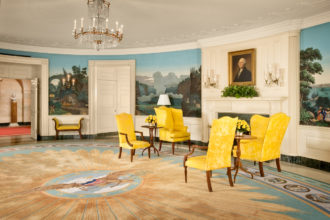 Blasingame designed a rug to refresh the room during the Bush presidency; The Family Dining Room featured a Théobald Chartran portrait of Edith Roosevelt. Michelle Obama has since redecorated the room in a modernized look.

President Bush appointed Blasingame to the Committee for the Preservation of the White House, on which he served from 2002 to 2008, affording the chance to leave a more permanent mark. When the White House Historical Association decided to donate a new Cabinet Room rug for the 100th anniversary of the West Wing, replacing the one from Johnson’s era, Blasingame was commissioned for the design. He incorporated stars, a laurel-leaf border, and other classic elements. Inspired by gold rays on a china pattern owned by George Washington, he also designed a rug to replace a tired one in the Diplomatic Reception Room, the most-used entrance in the entire mansion.

His additions, along with many of the upholstered and new items he selected withLaura Bush, are now in the White House’s permanent collection and will remain even as leaders change. But there are a few artifacts that will never be found—namely, architectural drawings. “I love paintings and drawings of rooms, but I refuse to do renderings. I had very few notes and little paperwork because I worked so spontaneously. I guess I’m professional,” he says with a laugh. There is little doubt.