The most curious of conversation pieces in the University Park home of Joel and Lyn Pustmueller are rightly those from the most unanticipated source: Joel himself.

The commercial real estate company owner also happens to be a self-taught artist—his abstract paintings are found in nearly every room. “Joel is my Renaissance man,” Lyn says.

The couple met during a friend’s dinner party 15 years ago. “It was a Harry-meets-Sally situation that worked out,” Lyn says. And when the last of their four daughters was set to flee the nest, they aimed to downsize. That was until they fortuitously stumbled upon a three-story, 6,700-square-foot transitional a few streets over, newly built by Jeff Gilbert and architected by Clayton Nelson.

“We wanted a grown-up playhouse.”

Though they were in the midst of searching lots and new-build blueprinting, they found themselves returning to take notes of the home’s floor-to-ceiling windows, contemporary layout, and more traditional details—herringbone brick fireplaces with stone mantles, oak beams, and detailed cabinetry. They scrapped their plans and moved right in. “We would have gone more contemporary, but this is transitional and it’s sort of fun that it’s sneaky and not obvious what the style is,” Joel says.

They knew the home would be the fresh empty-nester start they needed, offering a relaxing space for entertaining. “We wanted a grown-up playhouse,” Lyn says. To begin anew, they found longtime Dallas interior designer Alice Cottrell, who also tapped colleague and frequent collaborator Rick Rozas. The design duo are decades-long friends with compatible talents—if she is the master of fabrics, he is of spatial arrangement. They pride themselves on design that ignores their own propensities, and instead, speaks to the homeowner.

The designers quickly established buzzwords: cheerful, comfortable, sophisticated, lively, durable, and life filled. “The first time I met with Lyn and Joel they were joking, laughing, and self-deprecating, which was refreshing because it meant they didn’t take themselves seriously,” Rick says. “So we wanted to bring a casual lightness to the home …we wanted it to feel elegant and sophisticated, while turning down the volume on seriousness.” 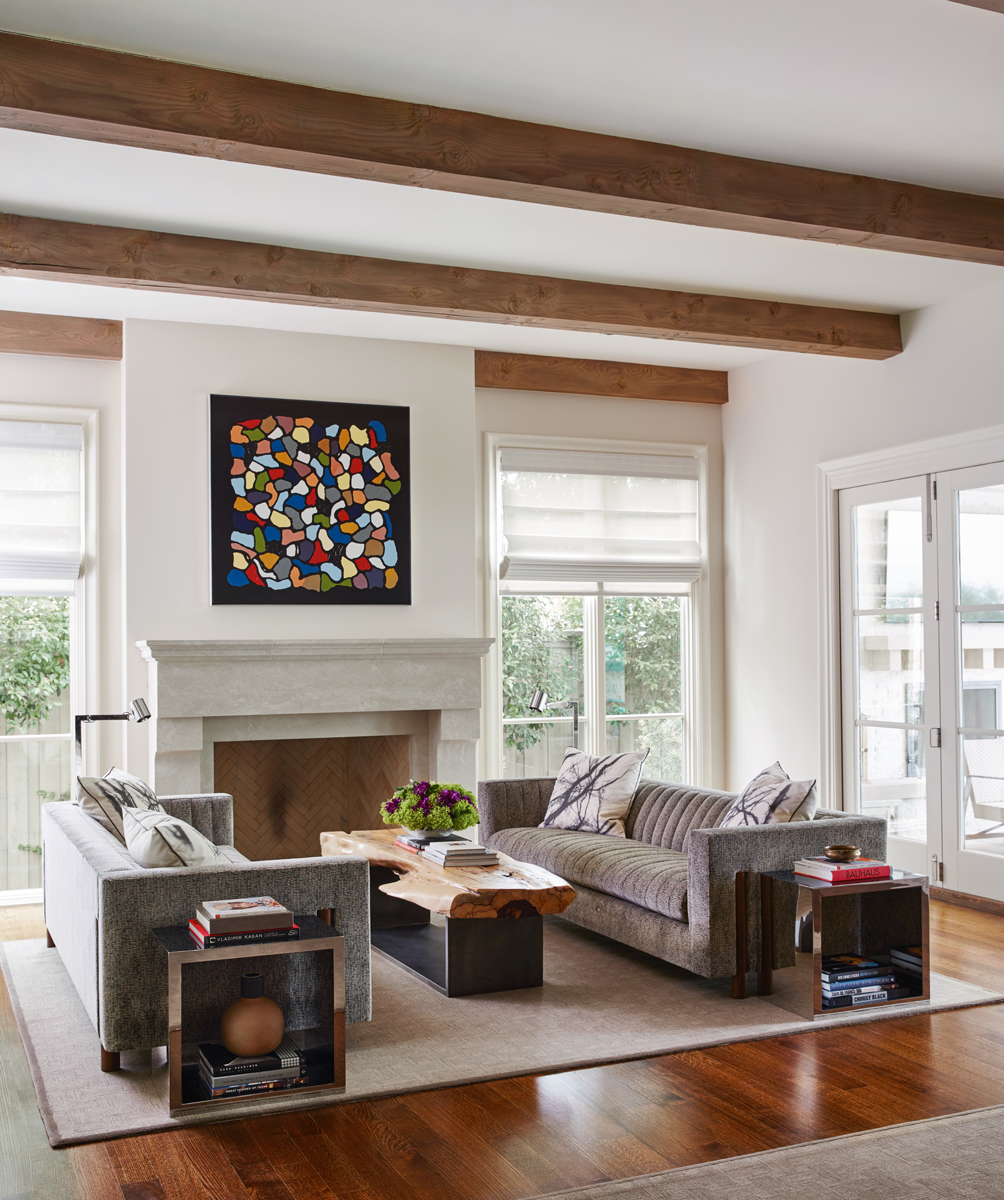 Facing Pollack sofas from The Bright Group, a coffee table (a tamarind slab on a steel base) from Big Mango Trading Company, and Inox New York Euler stainless side tables form the arrangement in the family room. A pair of George Cameron Nash Chantecaille chrome floor lamps, an oil-on-wood piece by Joel Pustmueller, and pillows from Calypso St. Barth finish the space. The rug is from Tai Ping Carpets’ Tribeca Collection.
Enter to see the bright-orange embossed Mémoires wallpaper from Donghia lining the first-floor staircase—which took a bit of convincing—and a bold, striped Edward Fields runner. “We wanted the house to be super happy right when you walk in, and that wall and striped rug are the first things you see,” Alice says. “These were the big starting pieces.”

They leaned primary with strong yellows, blues, reds, and even purples, boldly pairing the couple’s existing orange Knoll dining chairs with bright-purple leather Knoll armchairs from Bauhaus. Beneath lies another vibrant Edward Fields, the “Terra” rug, originally designed for the Rockefeller family to mask food spills. Family friend and Dallas artist Steven Shores loaned the original 1882 blueprints of the Texas State Capitol for reprinting, and the Pustmuellers now own façade print No. 9 and bird’s-eye interior view print No. 3.

Elegance came in by way of John Lyle mirrored side tables from Donghia, Kisabeth sofas and loveseats in plush commercial-grade upholstery, and a quartet of Knoll Platner Easy Chairs. Big Mango Trading Company was the source for a raw-mahogany bench, large petrified-wood cocktail table, and several teak and tamarind coffee tables.

Alice and Rick had the dining room’s HH Ruseau walnut table custom-made and sourced the Jonathan Browning Studios “Rochillion” chandelier out of San Francisco, requesting that the designer lengthen the fixtures to match the Pustmuellers’ space. Given that each of the seven leaded crystal spheres weighs in at 20 pounds, additional supports were added to accommodate the load. 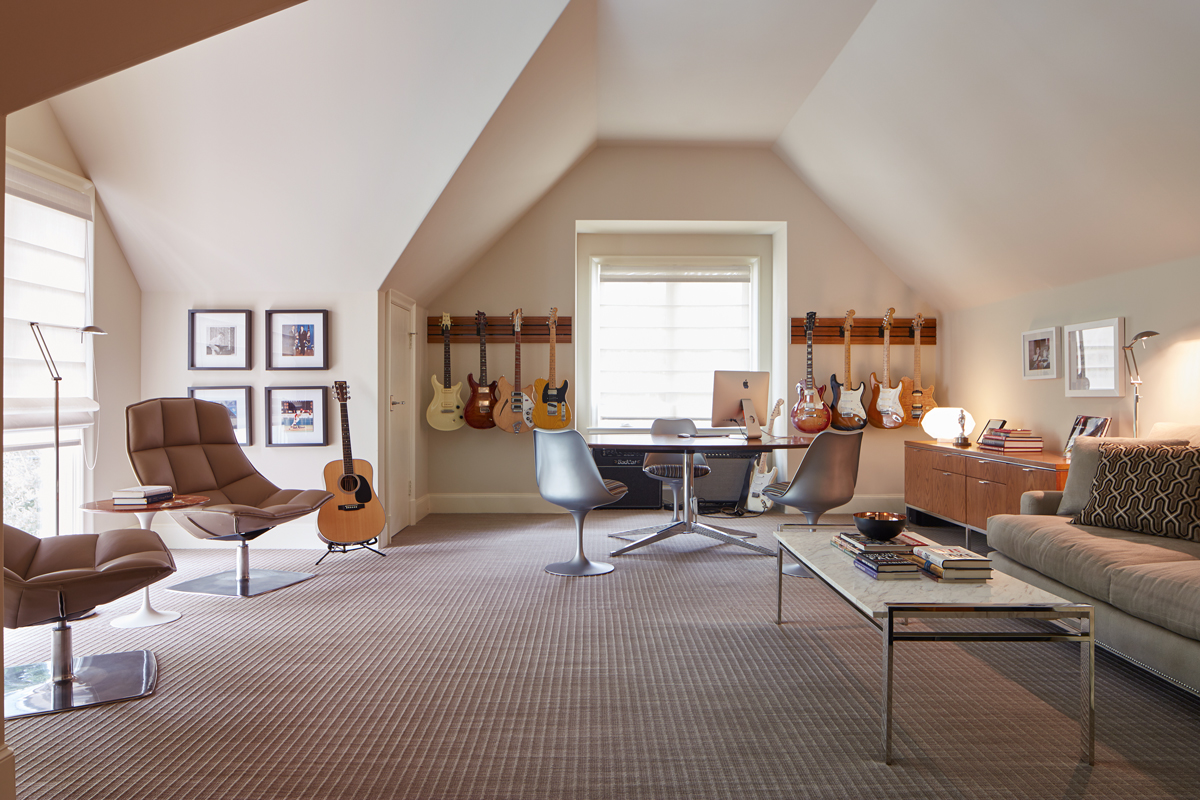 “It was really fun because Joel’s artistic creativity went into play, and Alice and Rick really dug into that,” Lyn says. “That’s what I love about the house; it’s really personal.”