Four years ago, Noel and Pratiksha Rigley moved into a new house — their fifth Plano home in 17 years—and Pratiksha began the familiar process of making changes. As owners of five Primrose Schools in the DFW area, the couple had chosen this house for its convenient location between campuses.

They were drawn to the place for its roughly 6,000 square feet of pristine hardwoods, striking black-and-white marble floors spanning the foyer and formal living room, and its soaring ceilings. A wall of windows framing the pool and patio helped seal the deal. 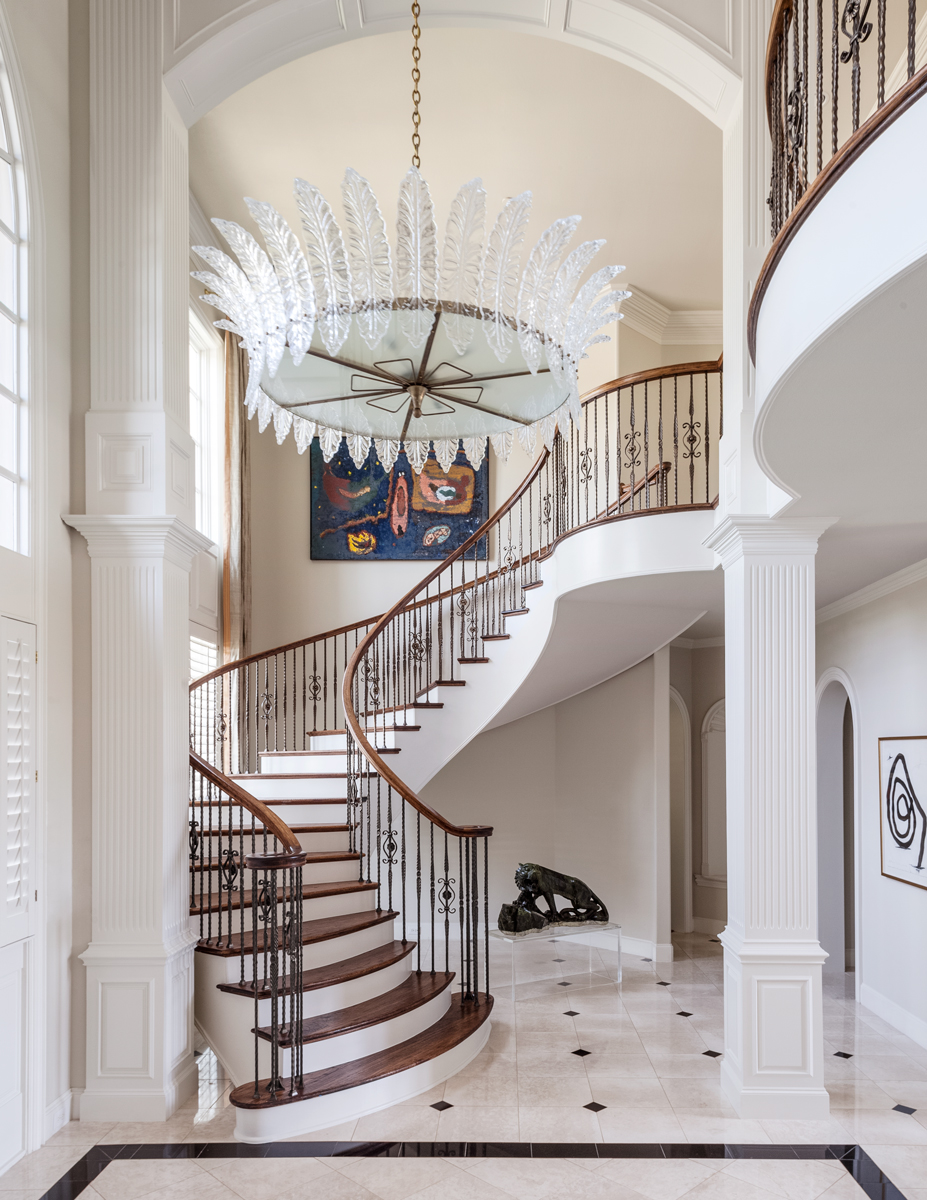 The foyer is lavished with a 1940s Italian chandelier fashioned of glass feathers. A 300-pound jade tiger on a custom Lucite base stands guard at the base of the stairs. Photography by Nathan Schroder
Photography by Nathan Schroder
“I really liked the house,” Pratiksha says, “but in every room, I’d say, ‘Oh, that has to change’ or ‘I’ve got to do something about that.’” On her list: the massive amount of dark millwork and wrought-iron fixtures that dated the home.

By the time she called Dallas interior designer Mike Mousel, the Rigleys had already finished an extensive kitchen remodel and made some exterior improvements. Still, Pratiksha was stumped by a small room that presented a big challenge: the study, which was to be her home base—a place where she could really concentrate and get work done. In theory.

Too dark and masculine for her taste, the room proved an unwelcoming space. “I wanted it lighter and brighter, and I wanted a chandelier,” she says. “I finally realized I needed some help.”

Dubbing the space “a dungeon,” Mike says it became phase one of their collaboration. To soften the dark wood-block paneling that dominated the room—and the house—Mike repainted it in his signature color, a serene, silvery, grayish-green Benjamin Moore hue, that he says goes with everything. The designer removed the glass cabinet doors, creating functioning shelves. He added Lucite drawer pulls to give the room an airy feel, and he glammed up the ceiling with a Nina Campbell wallpaper in a metallic leopard print.

Centering the room is an ornate Louis XV French writing desk accented by a custom, cream-colored cowhide rug, a clean-lined burl-wood console, and draperies in a Kelly Wearstler pattern.

“So, you’ve got this over-the-top desk with feminine lines, and then you put this more masculine burl-wood console behind it,” Mike says. “And I think that’s just such a nice juxtaposition.”

Pratiksha got her chandelier, too—a 1960s Murano glass Venini. “It seems completely and utterly crazy,” Mike says, “but it just makes that room not so uptight because it’s unexpected and hip and cool, but it’s elegant at the same time. It’s like a big star that just hangs there.” Pratiksha adds, “He likes to take the old and the new and blend it: like pairing my antique desk with a very modern chair and the furniture. I wouldn’t have thought of it, but it really works.” 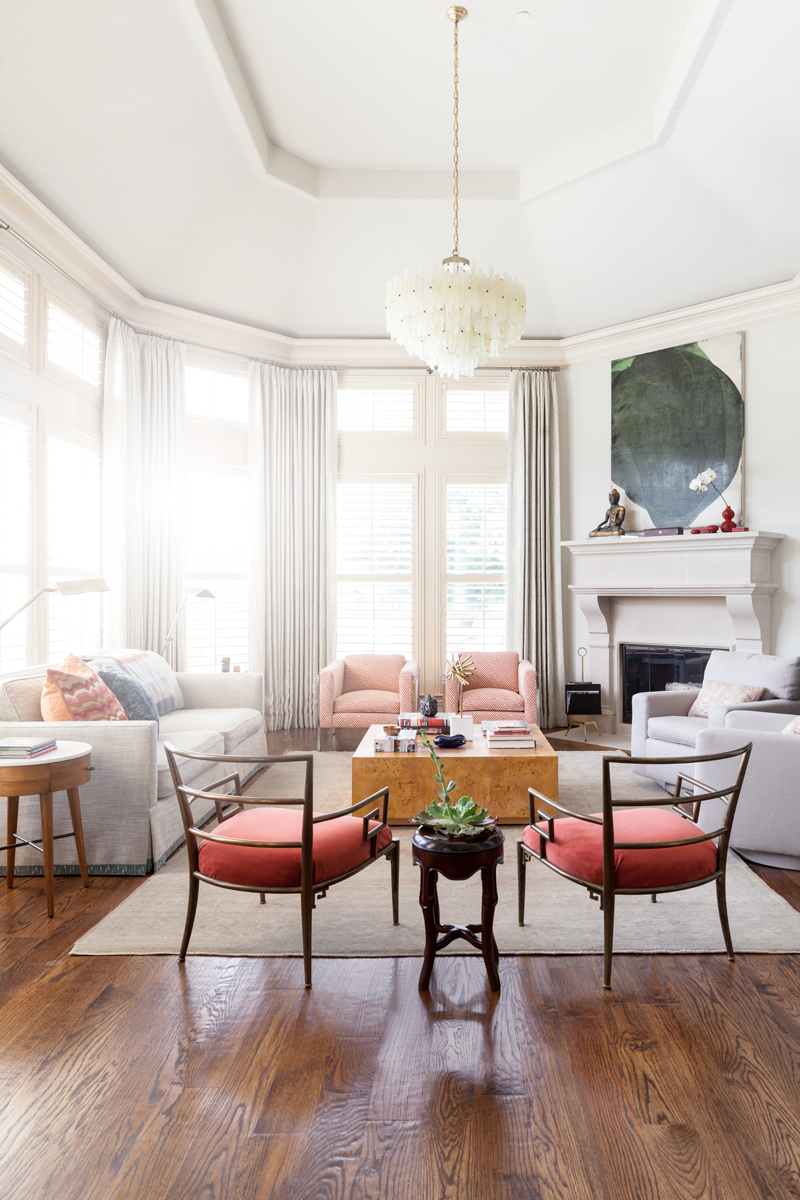 In the family room, the designer re-covered a pair of rare Mastercraft brass chairs purchased at Nick Brock Antiques in coral velvet. Overhead, the chandelier hails from Dallas’ historic Statler Hilton Hotel. Photography by Nathan Schroder
Photography by Nathan Schroder
It’s a concept he repeated throughout the house. For instance, the couple’s colonial-style bed now partners with another vintage Venini chandelier and a modern, sculptural fireplace surround redone with a floating glass screen and coat-upon-coat of glossy, white paint to offset the heaviness of the furniture. Similarly, an impressive rococo mirror, the centerpiece of the living room’s transformation, creates time-travel drama alongside a spirited 1970s starburst chandelier.

Mike says the Rigley’s fell in love with really fine lighting, so they went room by room, replacing the common fixtures with period pieces—a move that thoroughly elevated the home’s design. In the foyer, a one-of-a-kind, 48-inch chandelier with glittering glass feathers hangs barely 15 feet from a simpler brass FontanaArte piece. And in the redesigned family room, Mike placed a treasure he’d been saving for himself: a chandelier from one of the ballrooms of Dallas’ historic Statler Hilton Hotel.

Mike continued peeling off and repainting the dark millwork with his signature paint color, adding in custom furnishings and collectible, Asian-influenced art objects—like onyx lion head statues wearing Egyptian headdresses and a 300-pound jade tiger in the foyer—selected to inject some masculine energy in the space.

“He likes to take the old and the new and blend it: like pairing my antique desk with a very modern chair and the furniture. I wouldn’t have thought of it, but it really works.”

In the living room, a new marble-topped mantel pairs with a set of 1920s gilt tub chairs in silk mohair and a soft-hued salon sofa with a modern-day jacquard from Jim Thompson Fabrics. The Rigley’s black baby grand piano and an 18th-century Oushak Turkish rug bearing the now-familiar color scheme of corals, taupes, and cinnamon perpetuate the harmonious views.

“It’s really like a conservatory there,” Mike says. “The girls practice there all the time. They never used it before like they do now.”

Pratiksha says much of the magic Mike worked on their home seemed simply a matter of interpreting what they wanted. “Everything looks like it belongs, like it’s supposed to, like it’s me,” says Pratiksha. “So now I can just enjoy it.”

Curiously enough, both designer and client retell a story from the first day they met and something seemingly unimportant happened that they later deemed significant. As the story goes, Pratiksha was drinking coffee from her favorite cup, and when Mike asked her to show him a few things in the home that she loved, she waved her cup at him.

“It’s off-white with navy blue and salmon,” she explains. “I use it every day and I just really love it.”

Now, most of the home echoes those colors.

“She handed me the keys when she showed me that,” Mike says. “And I didn’t even know it.”