“Our 6-year-old great-nephew calls its a ‘house-eum,'” says homeowner Carol Quist of the West Highland Park home she shares with husband Patrick Tichacek, an assemblage of art and objects they’ve amassed over their 24 years together, and their 9-year-old rescue beagle, Buddy. 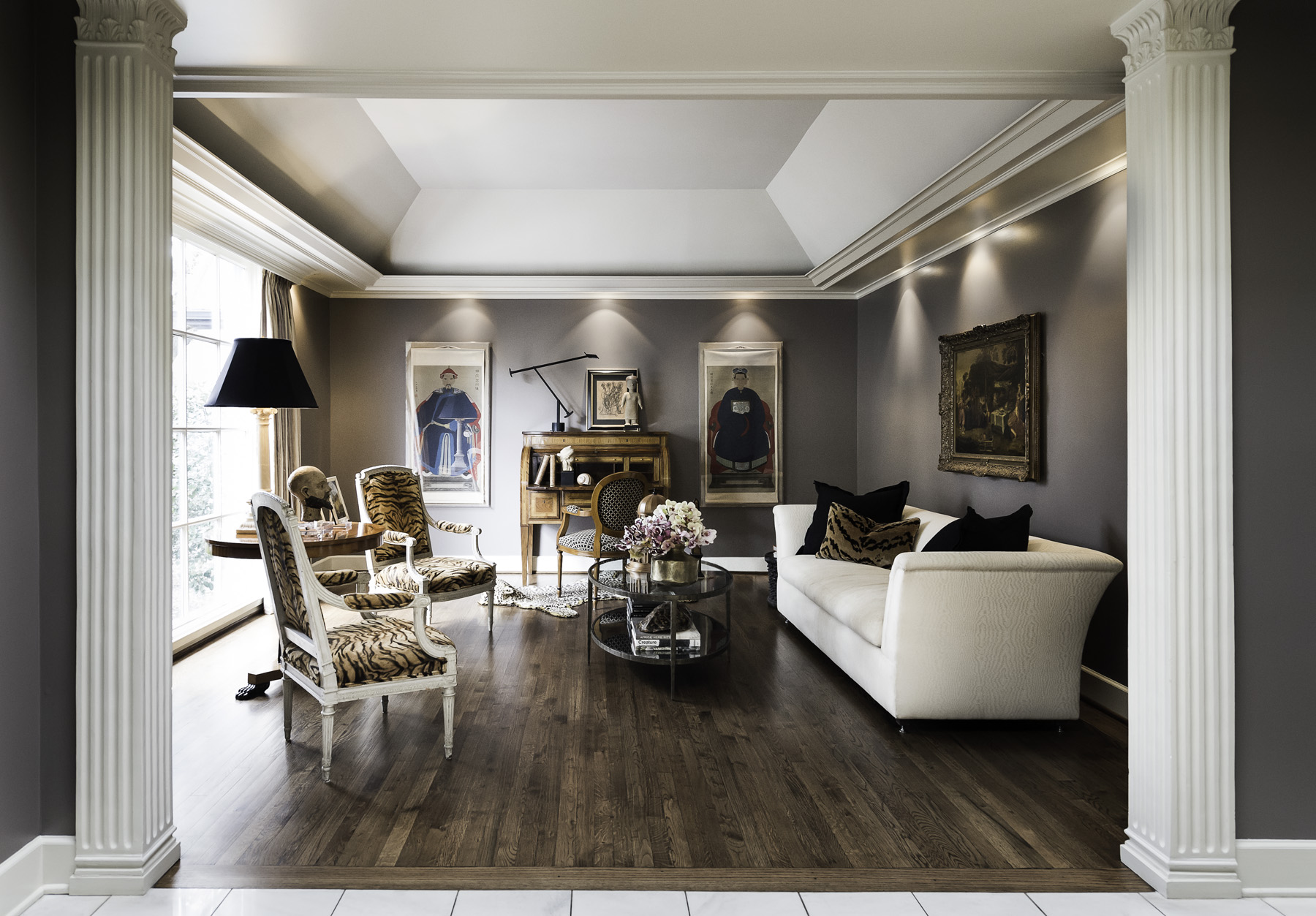 A pair of Lucite-framed Chinese ancestor portraits flank an antique desk in the formal living room.
An open house first lured the couple inside the French Eclectic-style home, with its promise of a first-floor master. “I remember telling our Realtor, ‘If we could sell our house, we’d buy this one,’” Patrick says, though the couple initially pictured themselves moving into a horizontal, mid-century modern rather than living under a mansard roof.

Once inside, “It was love at first sight,” says Carol of the 3,600-square-foot listing, just a 10-house zigzag from their then-home on Beverly Drive. In three months’ time, the couple had sold their home and moved to their new address, with little to do but paint a few walls, install new carpet upstairs, and refinish the walnut hardwoods that glorify the library and sunroom spaces. 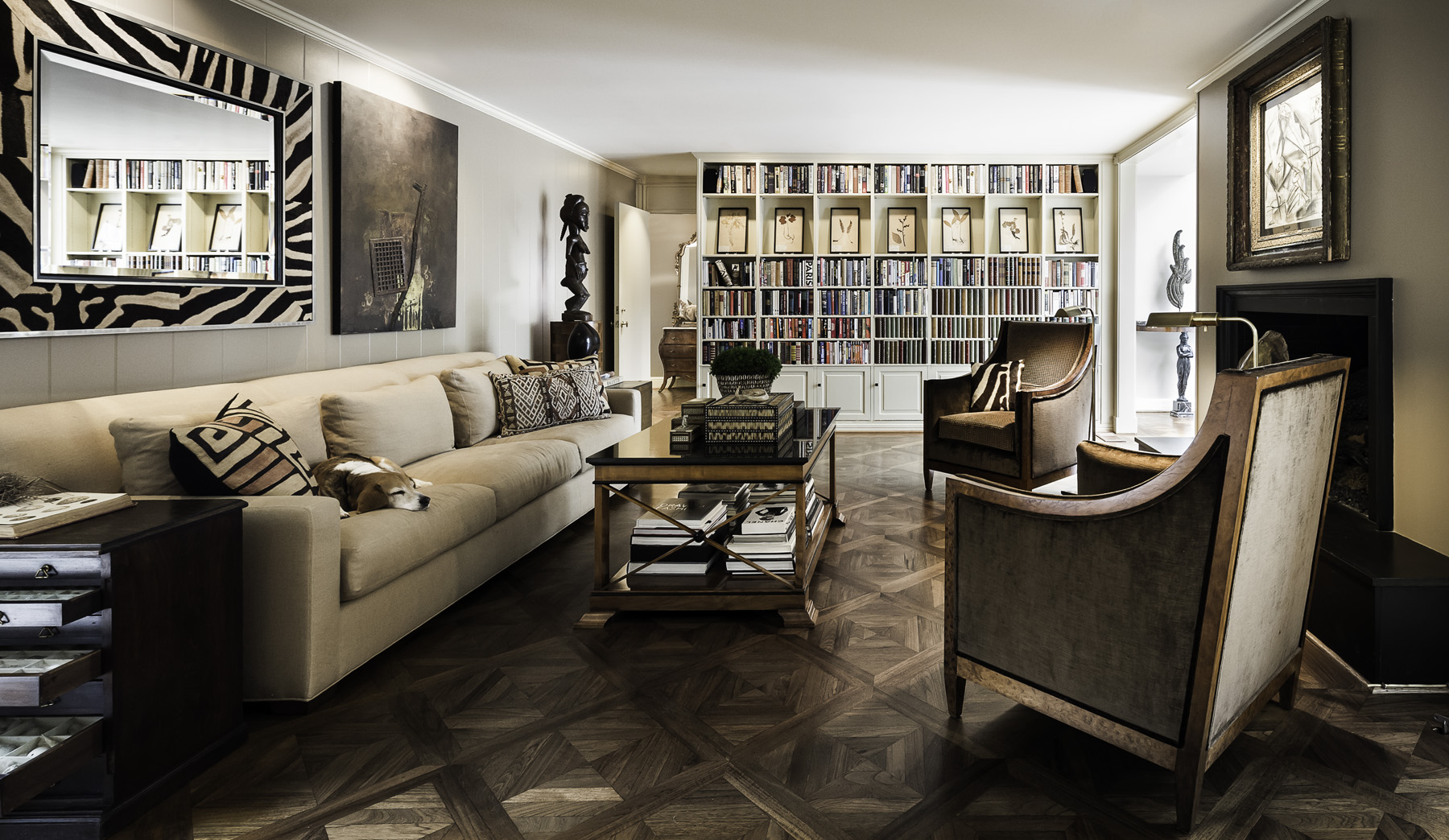 Hanging next to a Ralph Lauren zebra-skin mirror in the library is a mixed-media piece purchased at Craighead Green Gallery by artist and former Neiman Marcus exec Eddie Nunns.

“We are constantly editing to keep a balanced mix of classical, ethnic, natural, and modern.”

Once they were in, they got to work displaying their collection of pre-ban Indian ivory, African and Asian artifacts, statuary, and diverse artworks. Treasures are exhibited around every corner, in every nook, on every shelf. The mix is curated with a stylist’s eye—no big surprise, given Patrick’s job as a career sales associate for Neiman Marcus and Carol’s former 25-year history operating a showroom in the Dallas Apparel Mart.

“We are constantly editing to keep a balanced mix of classical, ethnic, natural, and modern,” Patrick says. Among their favorite works are animal oil paintings by Patrick’s dad, a St. Louis artist, and Carol’s prized Nicolas Lancret painting, a bequest from her great aunt’s estate. 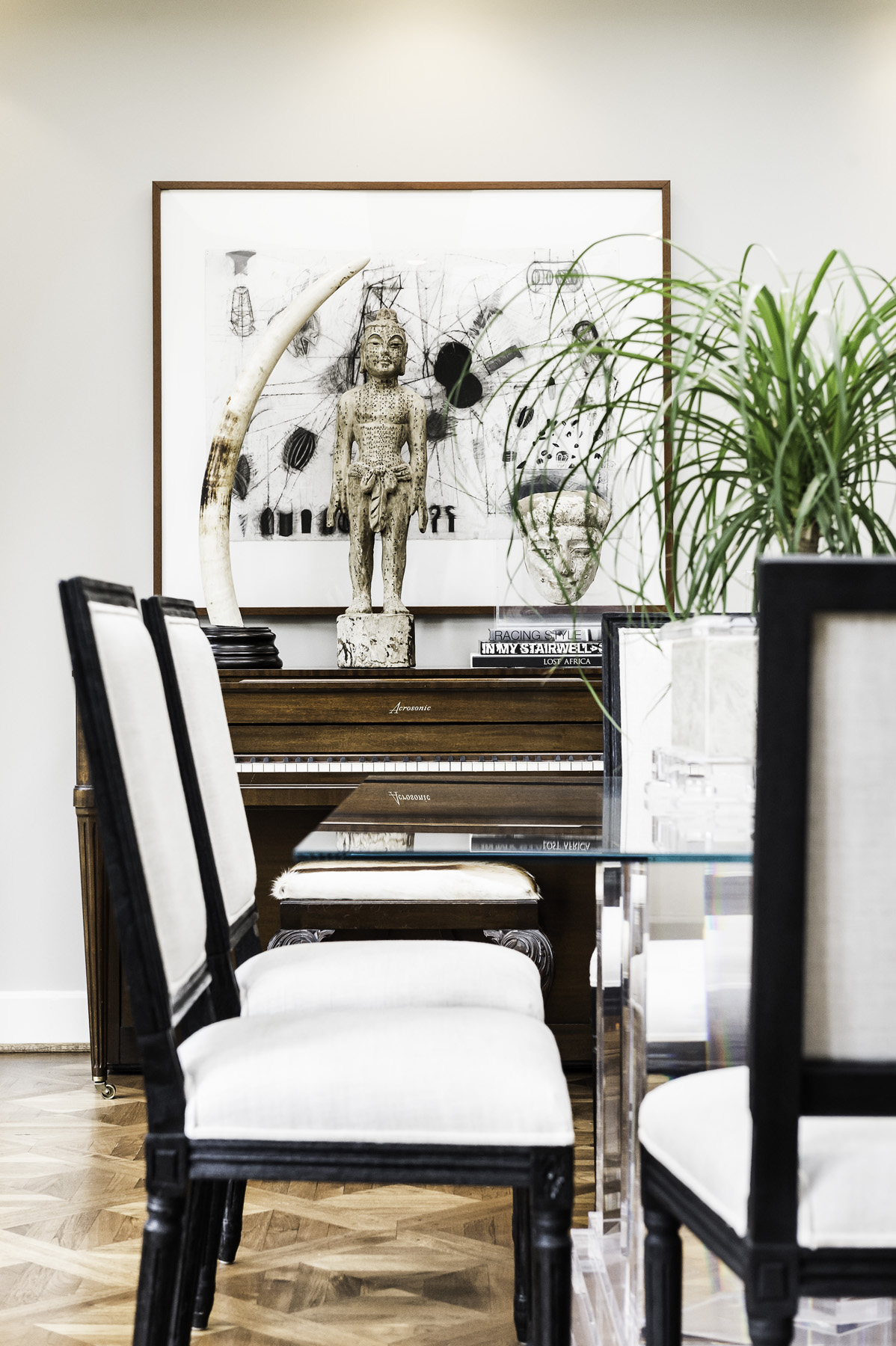 The piano doubles as a display for a pre-ban African tusk, a Chinese acupuncture model, and the head of a sarcophagus lid. Patrick purchased the Tracy Harris charcoal abstract at Nick Brock Antiques.
The art, objects, and furnishings commingle like guests at a perfectly cast dinner party: “Biedermeier, you simply must meet our primitive African friend Baule, the spirit spouse.” In the dining room, a signed Warhol provides a Pop-art wink to an otherwise more reverent formal space, with its inlaid oval table and crystal chandelier. A five-foot, 19th-century Chinese Buddha carved from camphor wood stands guard over the couple’s bedroom. The piece, once a featured attraction in a Dallas World Trade Center showroom, has resided in the entryways of the couple’s two previous homes. “I walked by it and had to have it,” Patrick remembers.

During the initial home tour, Carol and Patrick were taken with the owner’s Lucite table, a stunning eight-seater that anchored the sunroom. When she wouldn’t part with it, Patrick became bent on finding one of his own. After an extensive search, he stumbled upon a Lucite base at local consignment shop Found. The glass-topped base takes full advantage of the room’s natural light and serves as the casual—albeit glamorous—dining table. For seating, they chose carved, French-style chairs from Restoration Hardware.

The couple has divvied up the sunroom space in a way that works for them. The dining furnishings share the stretch of room with a loveseat and a bone-inlay, Klismos chair. On the opposite wall, Carol’s 1950s Baldwin Acrosonic piano serves up impromptu entertainment and doubles as the pedestal to an Egyptian sarcophagus mask preserved in acrylic. 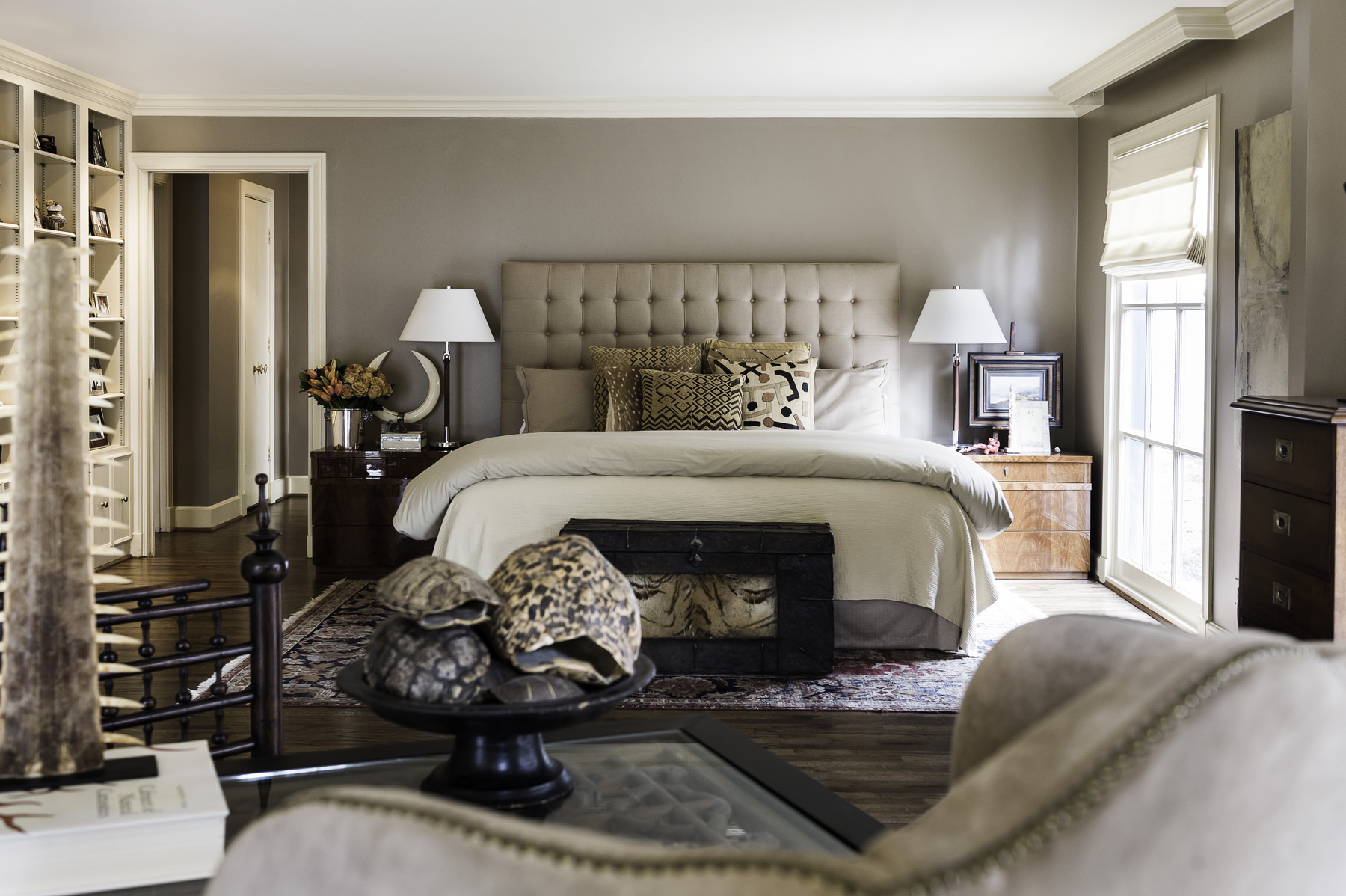 The previous homeowner, who unwittingly shared Patrick’s affection for Lucite, utilized the acrylic resin as a recurring design element: in the dining room as a floating shelf with a Greek key motif, as shelving in the kitchen and bar, as a banister, and as a backsplash in the powder bath.

“The amount of thought that went into this house was crazy.”

“The amount of thought that went into this house was crazy,” Patrick says, speaking to the indulgent amount of closet space and design details. Carol has a walk-in devoted entirely to eveningwear. And in the master closet, Patrick has ample space to display his many designer loafers. Love of Lucite noted, the former owner also had a thing for upholstered walls. A downstairs closet and the powder bath are dressed in lavish Fortuny. The red guest room, coined the “Persian Palace” by friends, is shrouded—ceiling to baseboards—in Ralph Lauren’s Hera Paisley fabric, including the closet’s interior and the drawer fronts inside. 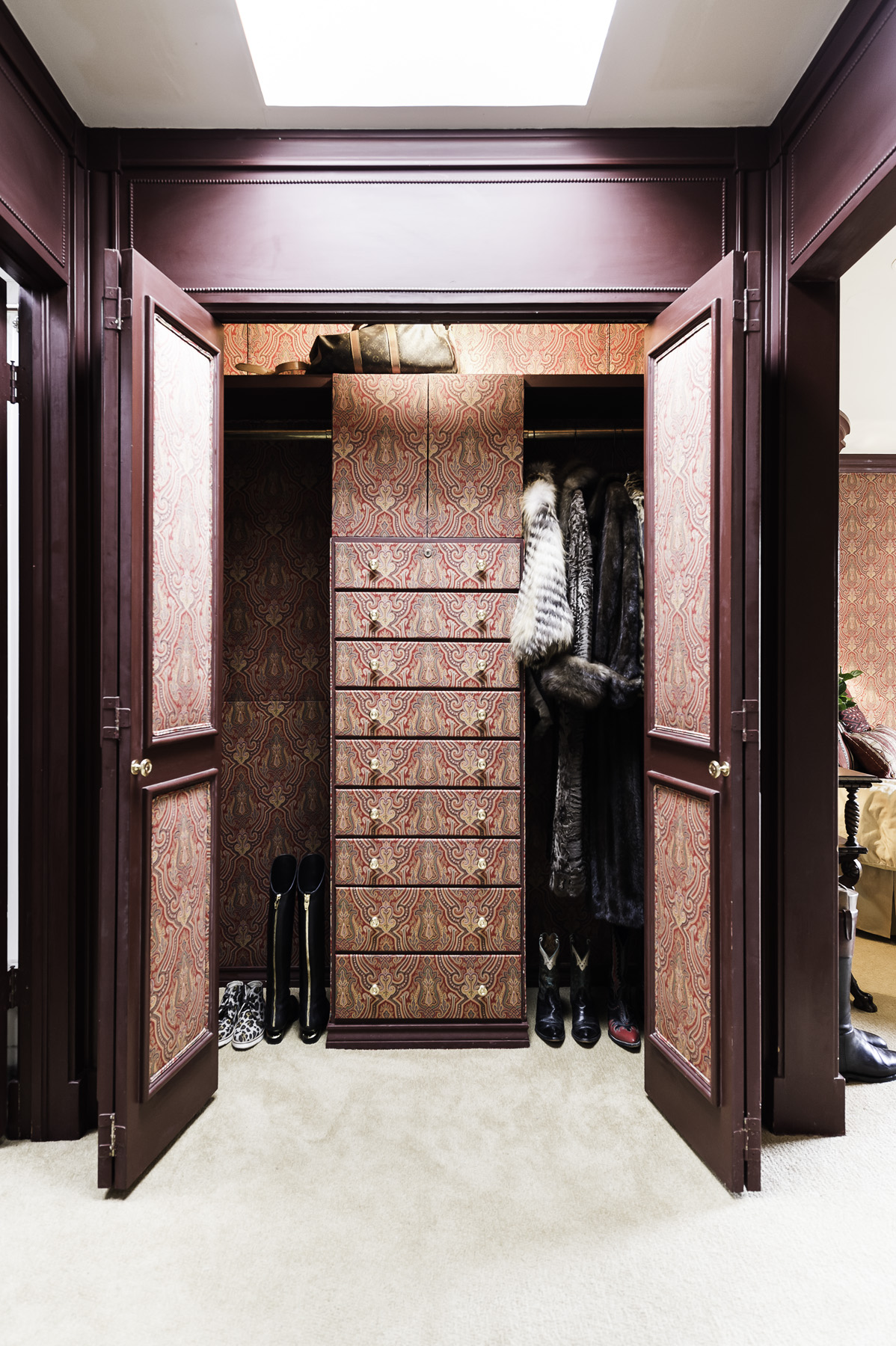 The closet in the guest room—dubbed the “Persian Palace”—is royally decked in Ralph Lauren fabric.
Both Patrick and Carol call out the library as their favorite room. Brimming with the finer points of art, travel, fashion, photography, and select novels, it’s also Carol and Buddy’s go-to place for curling up in front of the TV to root on her beloved Texas Rangers. If you don’t spot a television, that’s by design. It’s hidden behind a bookcase compartment disguised as hardbound volumes. The decorative cabinets—a quirky extra that came with the house—stash unsightly audio equipment and the like and can be accessed through yet another undercover cubby located in the couple’s bedroom.

“The size of the closets, the guest bedrooms on the second floor, the pool house with a bathroom—they almost read our minds when they built this house,” Patrick says. Call it mindreading, real-estate kismet, or plain, old-fashioned good luck. For the home’s three inhabitants, it’s labeled perfection. “It’s a good home for our stuff,” Patrick says. “And for us,” Carol adds.