In a neighborhood where new construction typically comes at the expense of a vintage teardown, the Preston Hollow home of Donna and Larry Olschwanger makes the best of its old bones. The couple bought their 1937-built English Tudor in 2000, when their son, Jordan, was 5 and daughter, Megan, was only 2.

The couple was quick to hire a decorator to impart the same kind of cozy, home-baked character into the home’s interior, taking the home down to the studs in the process. “The whole house looked like a La Madeleine,” Larry says.

“There was a lot of dark wood,” Donna chimes. “Our decorator used to work for La Madeleine—seriously.”

As their children grew older, the family’s needs changed. “For four or five years, we talked about building, selling, remodeling,” Larry remembers. “We actually had plans to tear this house down and build a big Mediterranean.” The day before the couple was to sign the contract to break ground on the 7,500-square-foot new construction, Larry threw on the breaks. “The financial crisis hit, and I said to Donna, ‘We’re not doing anything; we’re going to see what happens.’” When the market recovered, they realized they had made the right decision. “We knew afterward that a house that size wasn’t practical for us,” Larry says.

The couple, however, was still feeling restless. Larry proposed undertaking an extensive remodel—cutting with the home’s traditional ties for a more modern architectural style. Their generously sized, half-acre lot and genuine love for their street made the decision to stay easier. They enlisted Will Snyder of Boerder Snyder Architects to execute their vision. 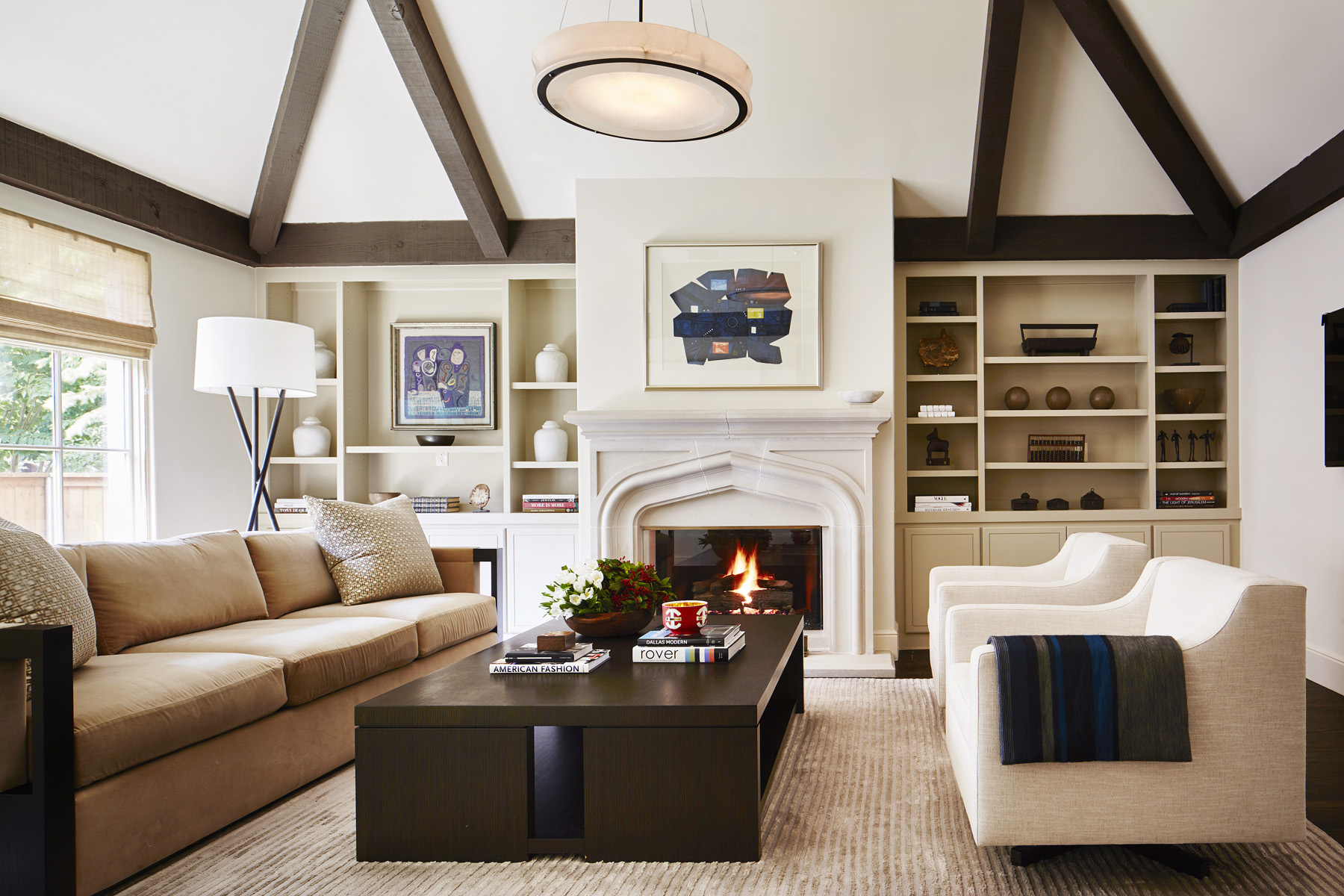 In Larry and Donna’s den, which highlights the home’s original wood beams, Gonzalo chose a Joseph Jeup “Edward” sofa from Holly Hunt, along with cream swivel armchairs and a generously sized cocktail table. Throw is from Nest.
In 2011, half of the home was again taken down to the studs, and the other half was bulldozed and completely rebuilt. The new plan extended the slab to accommodate a kids’ wing with a large playroom, a sitting room off the master, and larger hallways.

For a year, the family leased a house just down the street, a prime location for keeping tabs on the progress. Moving out was the most challenging part of the process, according to Donna. “But with everything in boxes, we realized what we could live without,” she says.

Today, the home is virtually unrecognizable. No signs of the French café remain, but for wood beams that decorate the ceilings of the kitchen and den and a portion of the home’s original roof line. Smooth stucco has erased the once-brick façade. Museum-finished white walls and an abundance of windows have forced out the darkness of the erstwhile interiors. Outwardly, the soft-contemporary residence poses as new construction. “Twice I’ve had somebody ring the doorbell to ask, ‘Is the house for sale?’” Donna says.

It wasn’t until construction had almost wrapped that the homeowners got to work hiring an interior designer. Donna had been collecting magazine tears of rooms, furniture, and elements she liked. Upon closer inspection, she discovered the clippings she loved most were credited to designer Gonzalo Bueno, cofounder of the Dallas-based architecture and design firm Ten Plus Three.

“They kept telling me they didn’t want the typical Dallas house,” Gonzalo remembers. When it came to the furniture, the couple donated or sold the uncoordinated mix of antiques they had purchased or inherited from relatives. To Gonzalo, that meant a blank slate. How they live and entertain, their kids’ needs, and the sizes of the rooms informed his design decisions. “We did a lot of custom pieces that made sense with the house and with them—and their dog, Lilly,” the designer says.

They kept telling me they didn’t want the typical Dallas house.

Gonzalo was careful in his selections, noting Donna’s perfectionist tendencies. She didn’t like, for instance, seeing the back of the living-room sofa through the window, so he designed a sofa console for a better vignette. Donna finally got the pedestal dining table she’d always wanted. “I love how it looks,” she says, “but more than that, anytime we use that room, it’s for happy family occasions.”

For the kids’ playroom—a stylized, TV-viewing haven—Gonzalo designed the room’s cocktail table from a slab of Sahara Noir marble he found and became “obsessed with.” He also made a designer tweak that ultimately had the most dramatic impact on the room. “The builder had recessed the TV into the wall, but against that white wall, it just looked like this big, black, floating rectangle,” Gonzalo says. “We needed to do a built-in.” He stained the rift-sawn-oak wall a provocative ebony. On it, he hung a pair of contrasting metallic gold consoles.

The couple chose a palette of neutrals they wouldn’t tire of, which presented the ideal environment for pops of color and texture in their artwork. In fact, the Olschwangers have been spending more time lately working on their growing collection. Gonzalo helped them acquire the Damien Hirst that features in their entry as well as the cut-paper landscape by British artist David Ball that hangs in their den. A porcelain-and-22-karat-gold-leaf installation by Mexican artist Lucrecia Waggoner snakes along the foyer’s east wall above a floating trio of craggy console units. Gonzalo brought in Ashley Tatum, of Tatum Art Advisory, to direct the Olschwangers in finding more pieces that resonate with them. “She’s done great,” he says, citing the three-panel Michael Just fronting the mantle.

When it came time to design the kids’ bedrooms, daughter Megan, now a high-school senior, fancied a purple-and-white room with one sparkly wall and another covered in a dry-erase surface. Conversely, Jordan, a man of simple needs, expressed but one desire: carpet. The University of Texas sophomore got his wish, along with a handsome adult bedroom to go with it.

“It was fun going to all the different galleries and showrooms,” Larry says. “It’s fun until you get the bill. But we said, ‘Look, we haven’t bought furniture for 20 years, so let’s have a good time and enjoy it.’” And enjoying it is exactly what they are doing.

On the cusp of becoming empty nesters, this mother and father of reinvention finally feel right at home. “I just love how pretty it is,” Donna says. “I would do it all over again.”