You probably know Thrift Studio, wherein the city’s top designers create fabulous vignettes filled with treasures donated by local showrooms. The annual shopping event benefits Dwell with Dignity, which Lisa Robison started in 2009 to empower families in need by providing beautiful, smart living spaces. The next Thrift is April 23, and you can buy tickets (or just donate!) at dwellwithdignity.org. 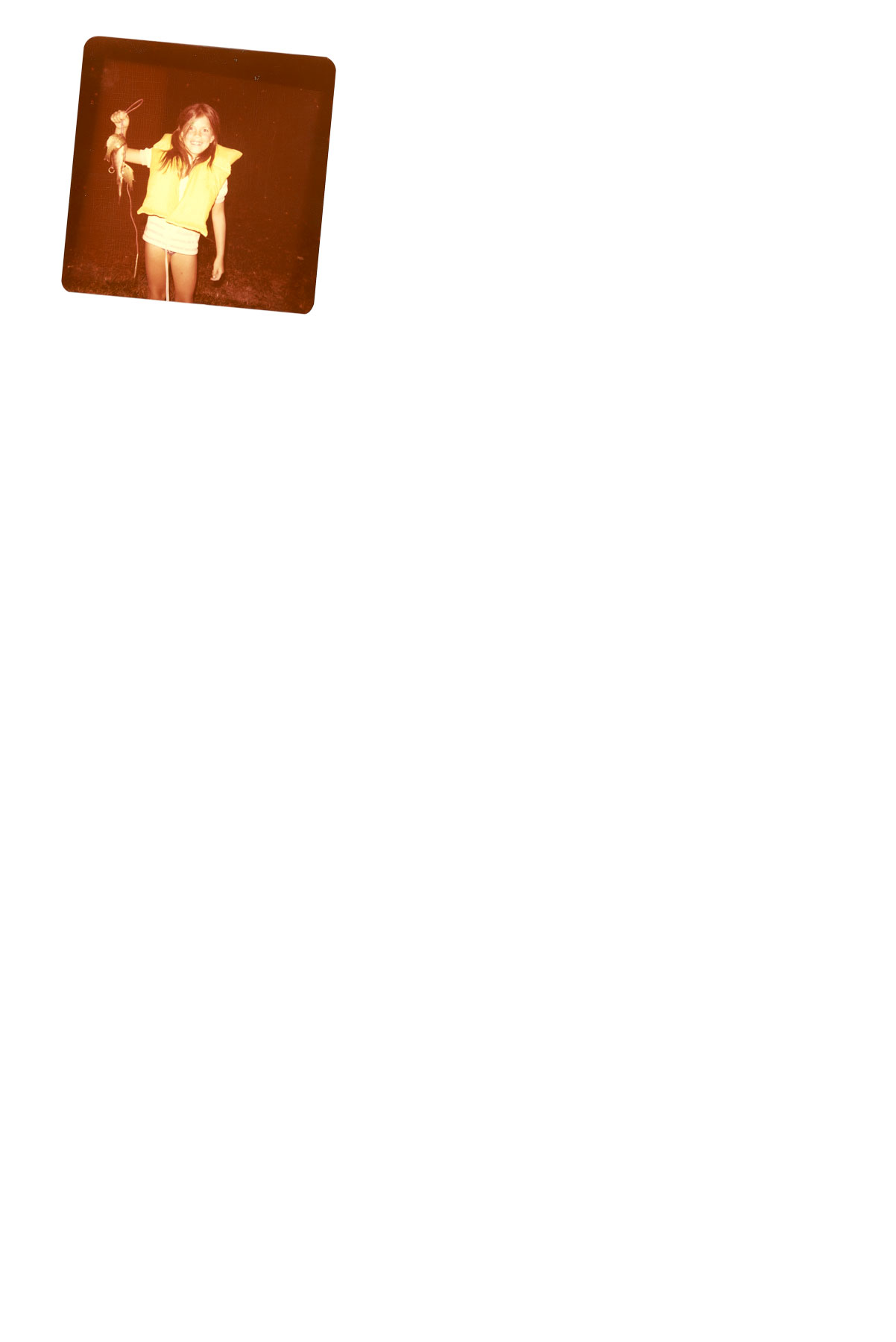 Lisa Robison spent a lot of summers as a girl fishing in Michigan. Courtesy of Lisa Robison
Born in Ohio; family moves to Naperville, Illinois, when she is 5. “I grew up in the suburbs of Chicago. It was a great place to explore. My dad worked at the Merchandise Mart—it’s huge. We would go to Oak Street Beach. The city was influential to me.”

Starts moving furniture fairly early. “My room was filled with that inexpensive French Provincial furniture from Sears—with the gold trim. I had every piece. I used to change the room all the time—physically move the furniture around.”

Makes plans to become a businesslady. “I had this romantic notion of downtown Chicago and the women I saw in all black—that was a businesswoman to me. I wanted to be that when I grew up. I thought I would live on Lakeshore Drive in one of those beautiful condos overlooking the water. I do live on Lakeshore now. It’s just a different one.”

Meets Doug Robison her senior year of college. “He lived in Dallas, and all I knew about the city was J.R. Ewing. I don’t know why, but I had a weird picture in my mind that it was like a desert. Anyway, I met him in Chicago—one of my friends was dating his friend. Later, he sent me a dozen roses and a plane ticket to Dallas. I didn’t tell anyone, but I flew to Dallas my senior year, and we just celebrated our 20-year anniversary.”

Graduates and moves to Dallas. “I drove my Toyota Corolla with 100,000 miles on it—no air conditioning, no cell phones in those days—to Dallas. I got an apartment and a job at a little advertising agency, basically selling ads.” 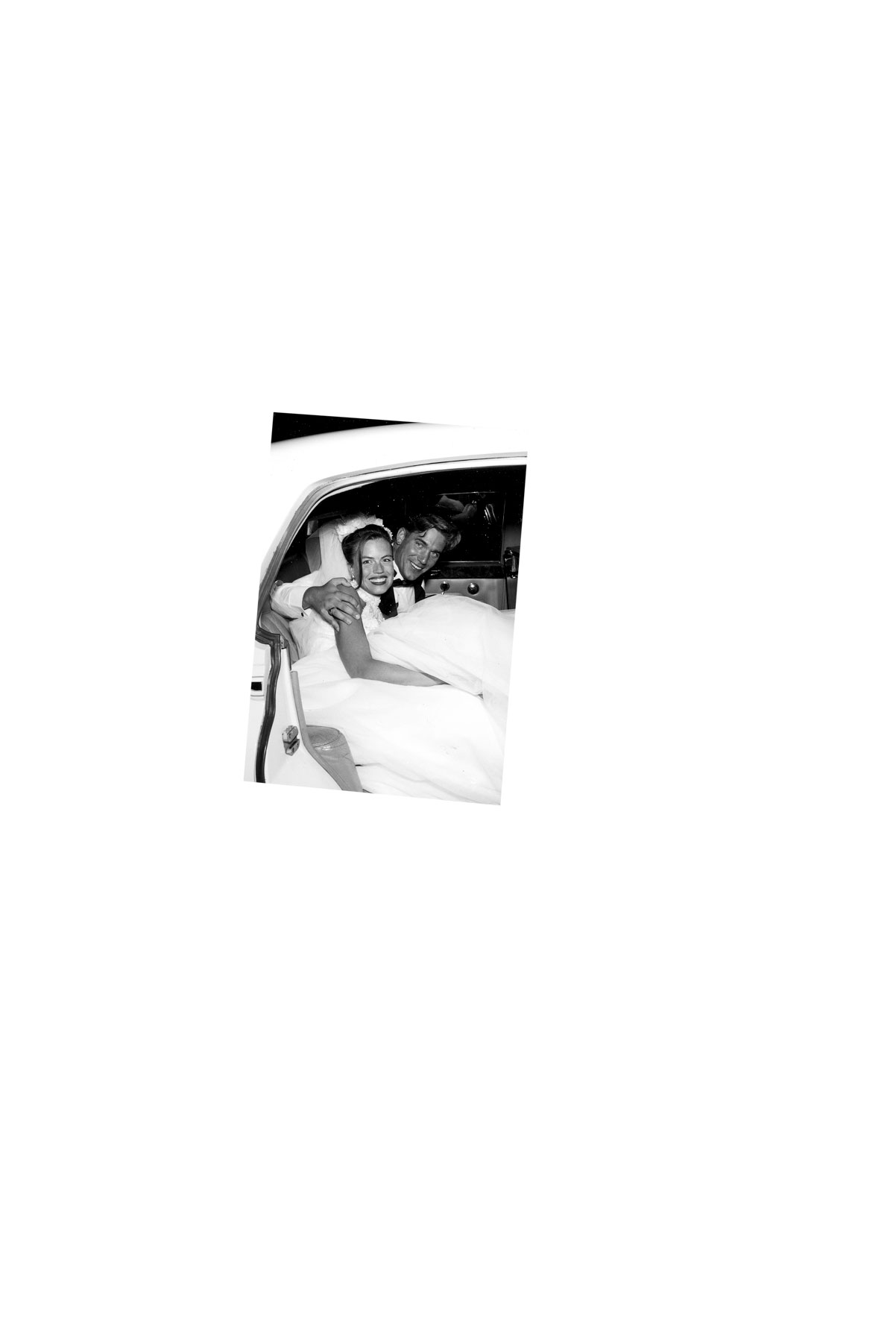 Lisa’s wedding to Doug Robison—a man she met by chance when he was visiting Chicago from Dallas. Courtesy of Lisa Robison
Becomes the international account executive at Lifetime Automotive Products. “I went to Europe. I had a translator with me, and I would go meet with 40 reps from all countries and teach them customer service. Today, I can put any windshield wiper on any model of car.”

Transitions into the jewelry business. “I did lots of different things: wholesale at a gold company, retail, design work.”

Enrolls in the design program at El Centro. “I did very well in business school—I’m a good memorizer. I have a logical brain. But design school is different. I would see people stay up until 2 or 3 in the morning and think, ‘They’re not organizing their time well.’ But that wasn’t the case. It’s so much harder when you’re not regurgitating someone else’s ideas and creating your own projects. It’s so much more mind work, and then there’s the physical work of putting together the presentation.”

Works for designer Paul Draper. “He is an extremely talented designer, and I learned so much. He is quite the perfectionist. I went right into designing for high-end clientele.”

Takes time off to raise her two children. “I didn’t work on anything professionally for about 10 years. But when my son entered kindergarten, I knew I had to do something creative. I love design, but I didn’t necessarily want the demanding lifestyle that working with the clientele would require.” 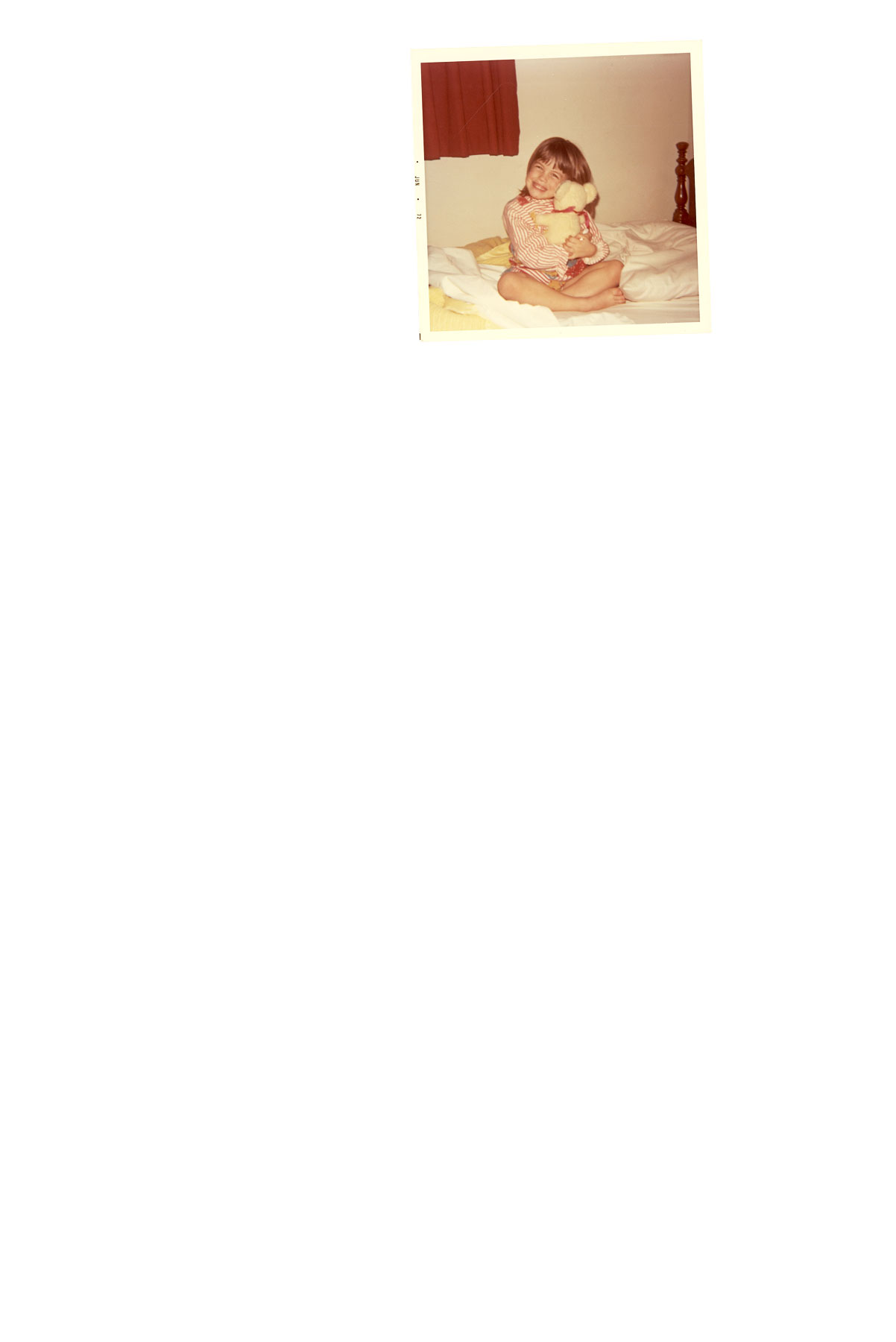 Lisa being perfectly adorable as a child. Courtesy of Lisa Robison
Has an “aha” moment. “It sounds corny, but I picked up a book by Oprah, and it said to find what it is that you’re passionate about and what you’re talented in. Figure out how to give that back to your community. That’s the secret to happiness. It got me thinking about design—how it influences your life and how environment can affect what you want to do with your life, how you’re able to function for your family. The people who can least afford it could benefit the most. How could I do interior design for people who really needed it to improve their lives?”

Finds her cause. “I started focusing on transitional housing for women and connecting with agencies who were helping these families. Around my birthday, my husband asked me what I wanted for my birthday. I asked him for a nest egg to start Dwell with Dignity.”

Completes her first Dwell project. “It was for a mom and baby. I was officing out of my home—restoring furniture, curb diving, thrifting. We just did it out of my garage—me and a couple of friends, my daughter Zoe, and her friends. When we were done, the woman came in with a baby on her hip, looked around, put a hand on her chest, and said, ‘I can breathe in here.’ That was a moment of clarity—families have been living with chaos and instability, and we could impact them on a raw, emotional level.”

Begins working with Kim Turner, whom she had met at El Centro. “I sent an email to everyone I knew after that first project to come check out the open house and bring canned goods for the pantry. Kim wasn’t able to come. We went to lunch. Her father had just died and she was really looking for a way to give back. She had been working in the design field for 10 years, and the first thing she said was, ‘Let’s get the design industry involved.’ We reached out to Anne and David Sutherland and told them what we were doing. They sent a truckful of furniture and fabrics and samples. I credit Kim with being that liaison to the design community.” 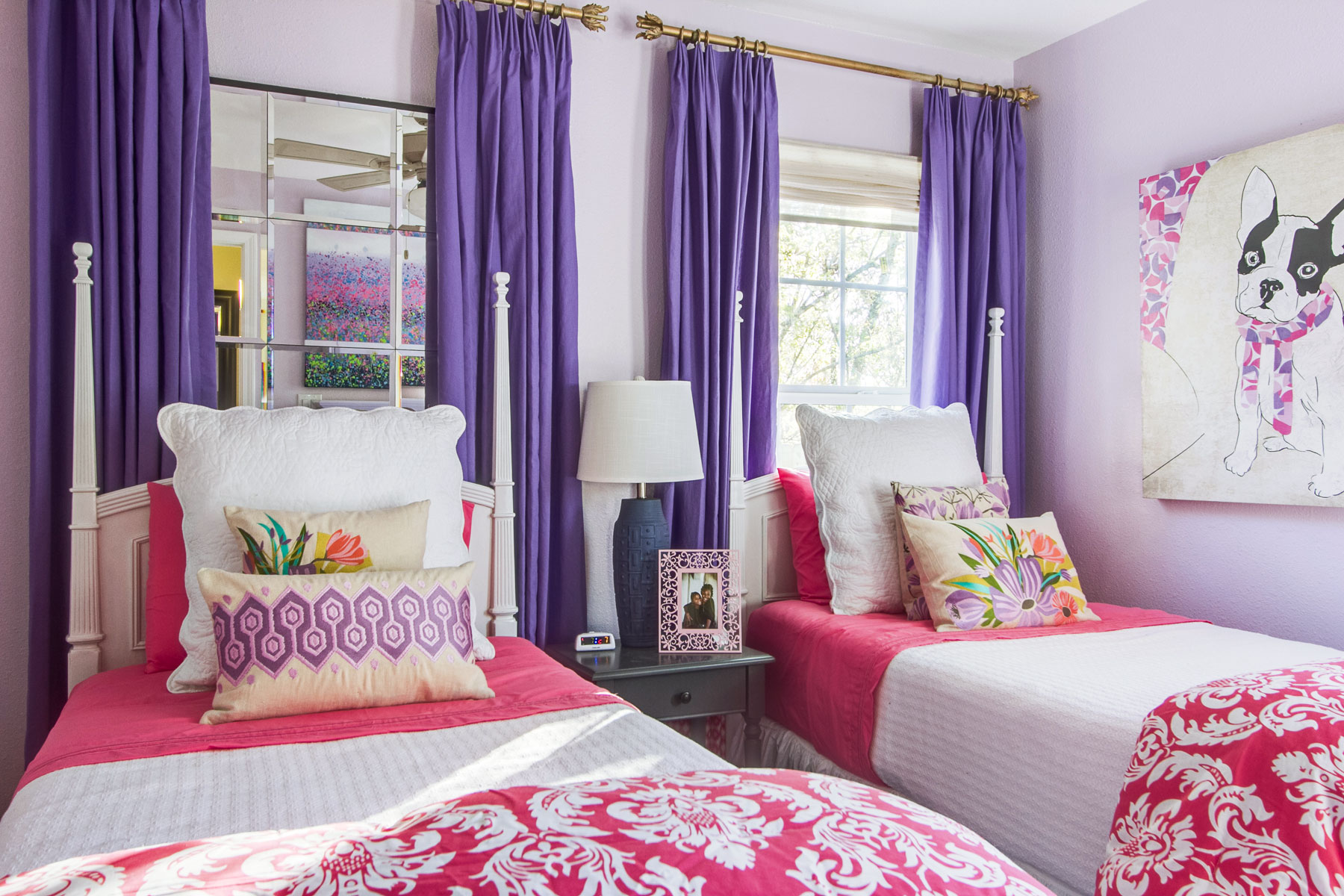 A children’s room designed by Dwell with Dignity, fulfilling a mission to empower women and children to lead their best lives and stop the cycle of poverty through design. Courtesy of Lisa Robison
Volunteers and donations begin arriving. “There was a creative investor in the community who loved what we were doing. He said, ‘If you can figure out a business plan to become self-sustaining, I will give you $10,000 to go toward the process.’ We created Thrift Studio. We wrote a business plan based on support from the industry and made Thrift a fundraising event. Later, he said, ‘Oh sorry. Can’t do it.’”

Thrift Studio and Dwell take off. “I love to see all the creativity that comes together in the vignette at Thrift Studio. This will be our eighth one. Now we’re only going to do it once a year, and it’s going to have to be the biggest, best one ever. There are eight people on payroll at Dwell, and we have lots of volunteers. We’re helping 16 families in 2015, and we are just completing our 61st project.”

“I’m not a girly girl. I like fashion and everything, but I can bait a hook like anybody.”