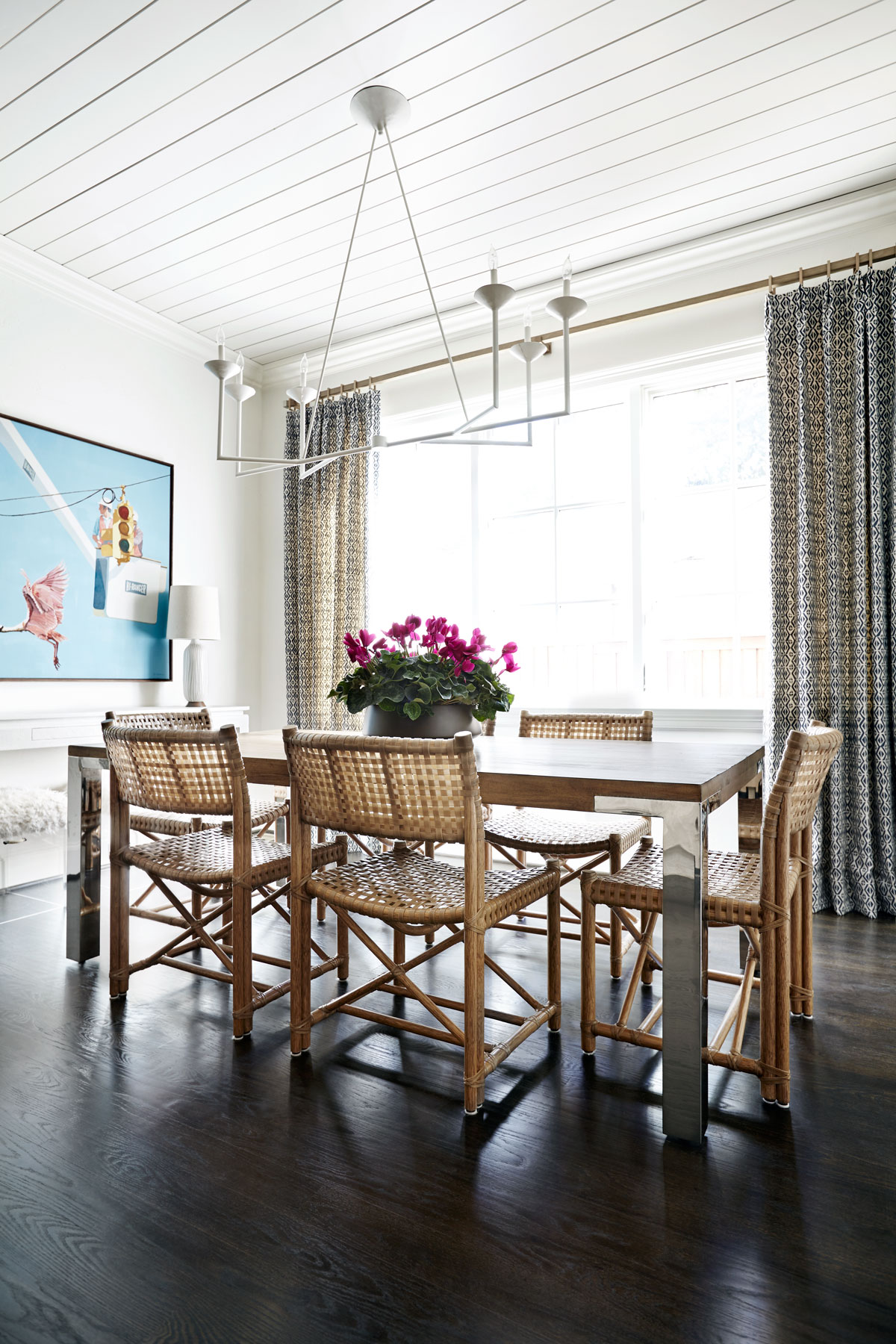 Having always been an admirer of art but not always having the confidence to buy it herself, Kasey Bevans is thrilled with the pieces designer Tracy Hardenburg introduced into the home. She particularly loves the unique painting by Jim Stoker in her breakfast room, which also features a Palecek table, chairs from Maguire, and a custom chandelier.
Last May, the first domino fell.

Kasey and Mark Bevans embarked on what started as a fairly simple update to their Park Cities home. At the time, the house, which they’d built in 2001, was a vision in early-aught décor: stained built-ins, outdated furnishings, fake flowers, and tired art.

“My mom came over and she goes, ‘Oh my God, you’ve got a picture of a rooster on your wall? That’s been out since the ’80s,’” Kasey laughs.

She knew it was time to modernize. Though she has a natural knack for interior design (which she inherited from her mother, a retired decorator), as a busy working mother, she knew she’d need some help. So she hired designer Tracy Hardenburg to do the heavy lifting.

“When Kasey came to me, she was ready for a complete style overhaul,” Tracy says. “She wanted less cluttered, more open family space that would be gracious for entertaining close friends and family. She wanted to de-clutter and have a calm space as a backdrop for their day-to-day life.”

“When Kasey came to me, she was ready for a complete style overhaul.”

Initially, Kasey intended to redo most of the downstairs as well as her two children’s rooms, focusing on brightening the space and introducing cleaner, simpler lines. Despite the home’s open floor plan, Kasey was insistent that certain spaces were off-limits.

“Our original plan was to do the entire downstairs except for my husband’s study and the bar that’s off the study,” Kasey remembers. “I didn’t want to touch Mark’s study—it was very rustic. And Tracy kept saying, ‘OK, but as soon as we finish everything else, it’s going to stand out like a sore thumb.’” 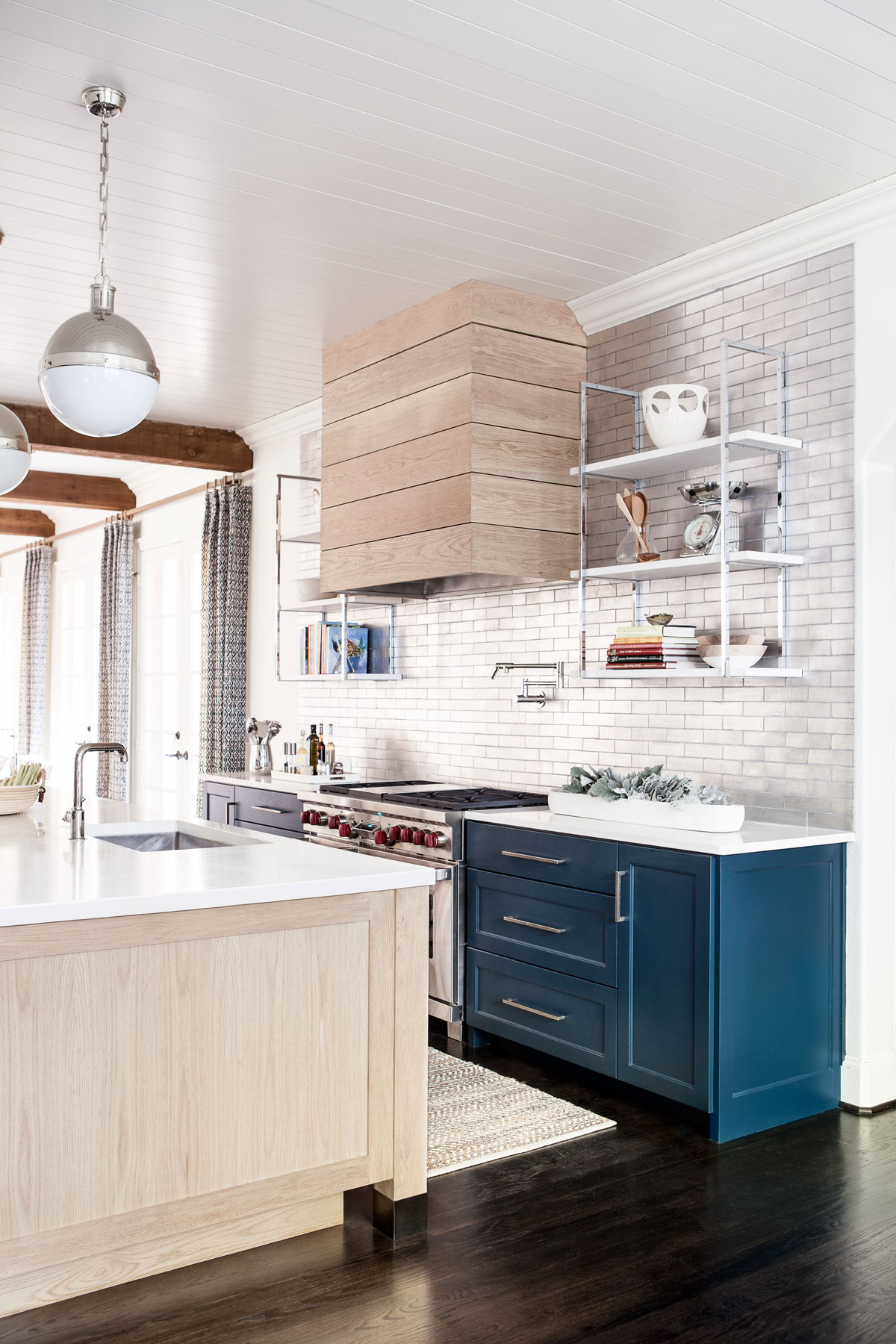 Tracy worked with Kasey’s brother, Todd Arnold, a contractor, to create a custom island (featuring a concrete top by Brian Sarché) and range hood for the kitchen. Aluminum tile from Ann Sacks and custom open shelving keep the space feeling bright and airy. The pendants are from Visual Comfort & Co.
Despite her misgivings, Tracy—with the help of her assistant, Layne Ogden—set about updating the home’s kitchen, breakfast room, dining room, family room, downstairs half-bath, and kids’ rooms. The kitchen saw the bulk of the renovations, with the island repositioned to provide a more functional layout and custom shelving installed in place of bulky cabinetry. Using interesting wall coverings throughout and almost entirely new furniture and accessories—much of it custom—Tracy brought new life into the previously dark, outdated house.

And then Kasey saw the light. “Sure enough, after it was done, I was like, “Ugh, I have to redo the study and bar, too.”

Tasked with creating a room that both husband and wife would love, Tracy bleached an antler chandelier the Bevanses already had and hung old family photos of Mark’s great grandfather herding cattle to lend the room a rustic feel. But by pairing that with a custom desk, a graphic rug from Gallerie Noir, and Élitis wallpaper, the room still reads as sophisticated.

“Mark’s an outdoorsman, so I wanted something that was manly and a little bit outdoorsy but was also modern and went with the house,” Kasey says. “I told Tracy, ‘I really don’t want a bunch of antlers and dead animals,’ and she was like, ‘Oh no, I can make it work where it really looks good.’”

“It’s a domino effect. You do one thing, and then you feel like you have to do another.”

The piece of art that hangs in the niche behind Mark’s desk is just one example of how Tracy surprised—and delighted—Kasey with her choices.

“If I would’ve seen that [at a gallery], I would’ve thought, ‘Oh that’s so cool,’ but I would not have thought, ‘I’m going to put that in my rustic study,’” Kasey says. “That’s what I like about Tracy’s style—she mixes materials, she mixes themes.”

Once the entirety of the downstairs was done, Kasey began to see other things with new eyes. Glass doors in the chic family room looked out onto a backyard that, she suddenly realized, was less than inviting. 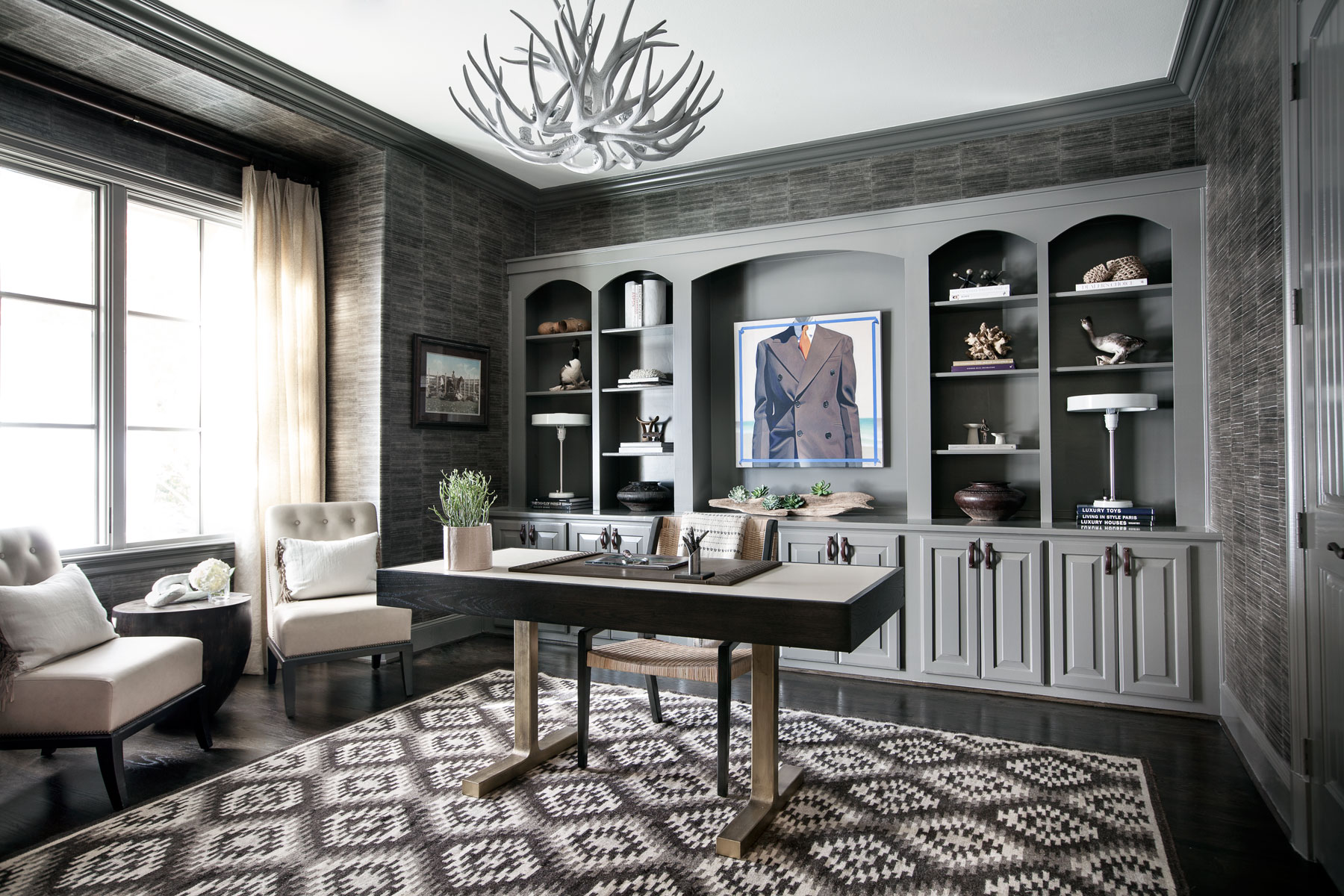 Kasey Bevans wanted to blend her husband’s rustic style with the contemporary feel of the home. Tracy Hardenburg achieved that by mixing natural elements like the antler chandelier with upscale furniture and finishes including Élitis wallpaper from Donghia, a custom desk, and a graphic rug from Gallerie Noir.

DESIGN NOTES: Tracy Hardenburg found the perfect finishing touch for the modern-rustic office in an unexpected and masculine art piece by Kendall Stallings.

“I’d tell my husband, ‘I can’t be in this nice room and look out to that backyard,’” she says. “So then we redid the whole backyard and put in a pool. It’s a domino effect. You do one thing, and then you feel like you have to do another. Then I’d go upstairs and immediately get depressed because my upstairs needed to be done.” (No surprise, they soon began work on the master bedroom, guest room, and game room, which will be completed in the coming months.) 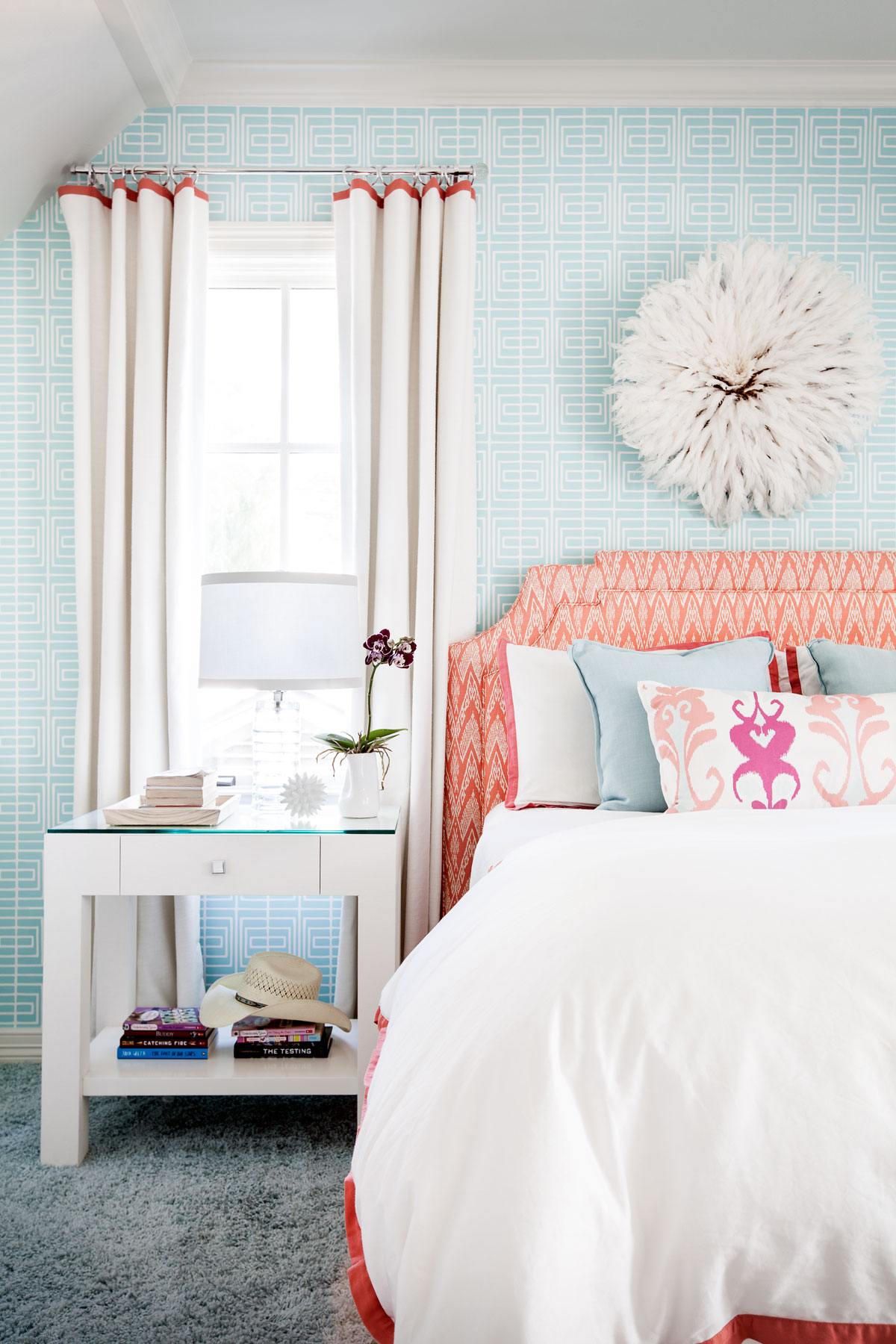 From the March/April 2015 Issue of D Home Pär Bengtsson
Pär Bengtsson
Though still a work in progress, the changes have already affected the way the Bevanses live in and use their home. Whereas they used to entertain almost solely at their lake house, now Kasey happily volunteers to host book club and poker night. The children love their new bedrooms and backyard and regularly invite friends over. And though they mostly dine out, the kitchen is now one of Kasey’s favorite spaces in the house.

“I’ve never been a cook, but no matter how fabulous of a kitchen you give me, that’s just not going to change,” she says. “But even though I don’t use it, I do love looking over and seeing it. It’s so neat and just different.” Some of the standout items include the island and wood-paneled range hood, which her brother, a contractor, constructed.

Tracy, too, loves how the project turned out, owing the success in part to the creative liberty she was given.

“Kasey gave us a lot of freedom, which, in my opinion, is why this project turned out so well,” she says. “It feels cohesive and is something I am very proud of. Especially her art—it’s whimsical and yet sophisticated with a good mix of pen-and-ink, collage, oil, and photography. It is reflective of her free spirit.”