The Stodghills knew what they wanted.

“We wanted a house that looked like it was built in Beverly Hills or Santa Barbara or Montecito 100 years ago. We spend a lot of time in L.A. and have family out there. We love the houses out there—it’s a more casual style of home,” Anne says. And the Stodghills are nothing if not very thorough people. She and husband Steve—along with a “very patient” real estate agent—looked at every house that could even remotely be considered Mediterranean at a certain price point in three zip codes.

The house they ultimately bought was the very first one they looked at—it just happened about a year and a half after they originally saw it. “The layout wasn’t quite what we wanted. We knew we wanted a huge library—for us that was going to be the most important room in the house,” she says.

So they brought in architect Will Snyder to transform the house. Snyder was the perfect choice, as he had been involved in restorations in Highland Park during its 100th anniversary. “He spends a lot of time in Santa Barbara, restoring Spanish Revival homes,” Anne says. “I told him, ‘I want this to be as if we are doing a restoration, even though this is a fairly new house.’” The home went from six bedrooms to three. A large game room became a ballroom suitable for large dinner parties and dance parties alike. They created a home theater modeled after the Castro Theatre in San Francisco. 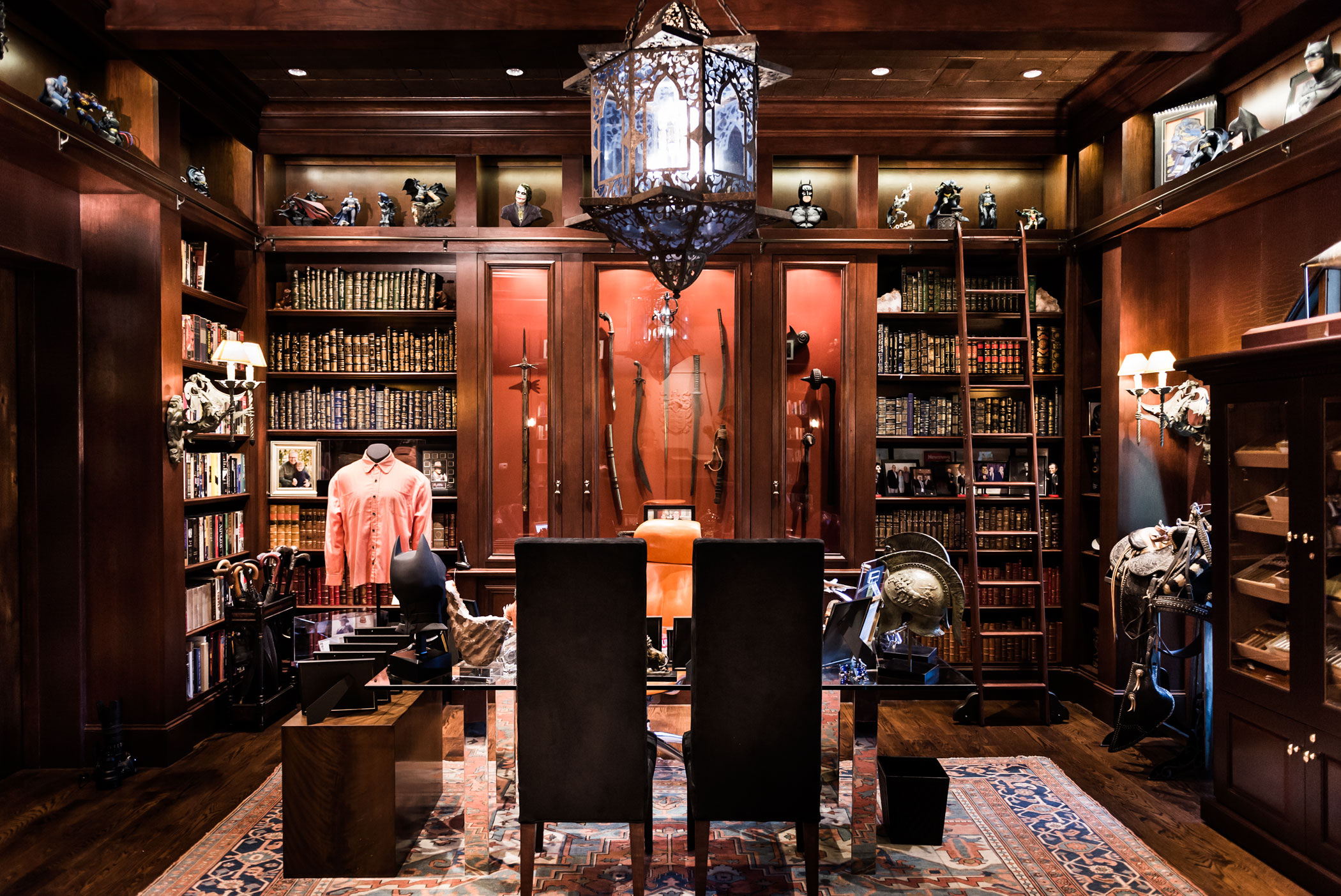 The library is Anne Stodghill’s favorite room in the house. “When I want to hang out and read a book, I’ll put on a fire and have a hot cup of tea or a glass of wine and curl up with book in there.”

And they got the library of their dreams. “It was originally a little sitting room, and we went down to the dirt, moved a load-bearing wall, removed a load-bearing wall, added a fireplace on an interior wall—we created that whole room,” Anne says. “That room was an absolute non-negotiable. We talked about having a library from the very first conversation we ever had about having a house together.” The room is now home to books and a number of one-of-a-kind artifacts, including a shirt John Wayne wore in The Undefeated, Doc Holliday’s jacket, and lots of Batman.

“My husband has been reading Batman comics since he was 5,” Anne says. “Batman is his favorite superhero because he has no powers. He’s human but through sheer hard work, perseverance, and will, he’s transformed himself into something extraordinary. Steve has more than 2,000 pieces of Batman memorabilia at his office. Only the super special ones are at the house.”

“Our house is big, but it’s not fussy. It’s a fairly casual house. We’re less formal than a lot of folks.”

During the six months of renovation, Anne set about trying to decide the placement of their rather large art collection. “We have a lot of art,” she says. “There were some bigger pieces that we purchased knowing that we were going to have a bigger house.” She says she printed out an 8 x 10 of every piece they owned and wrote the dimensions at the bottom. “I taped them to the walls so I could see the flow of the art. For the really large paintings, I took blue tape and marked off the corners so I could see the size on the wall. I was on that construction site every day—much to my contractor’s chagrin. I got to know the guys really well.”

Anne worked with designers Kara Legako and Debbie Grayson at TLC Contract Group. She says they were great about translating the vision, especially in the media room. “That entire room was designed in an hour and a half. Debbie understood what we wanted and laid out the room in front of us,” Anne says.

With renovations completed, the Stodghills got down to the business of throwing parties. They entertain once or twice a week. And we’re not talking small-scale affairs. When they hosted DIFFA Burgers & Burgundy two years ago, they had 300 people. But Anne says her favorite is a dinner party with 30 to 40 people in the ballroom. “I put together an interesting mix of people who might not otherwise know one another with lots of wine and good food, and we see what happens.”

On non-party days, Anne closes the gates, shuts out the world, and heads for the library. “I also have a ridiculously badass bathtub,” she says. “It’s super deep, and I can fill the water up to my chin. I’ve been known to vegetate for an hour or two.”