When Hunter Mahan met his future wife Kandi, he knew he was ready to give up his bachelor lifestyle—and that included his Colleyville bachelor pad. After the PGA golfer and the former Dallas Cowboys Cheerleader got engaged, they wanted to find a home they could establish together and make their own. But when they couldn’t find any existing homes that checked off all their boxes, they realized they would have to build.

Fortunately, Hunter knew just who to call: builder and pal Mark Molthan, whom several of Hunter’s friends had relied upon to create their own dream houses. Hunter and Kandi outlined their desires—a Mediterranean-style home with athletic facilities and a trophy room for Hunter, dedicated quarters for out-of-town visitors, and killer outdoor living spaces. Mark found an intriguing floor plan by a California architect—a fitting choice, since Hunter is a native of the Golden State. Unique features included a sunken courtyard area, a semi-private guest casita, and a breezeway between the main entrance and the front door. “It had more of a West Coast feel than what is typical in Dallas,” Mark says. The Mahans were sold. 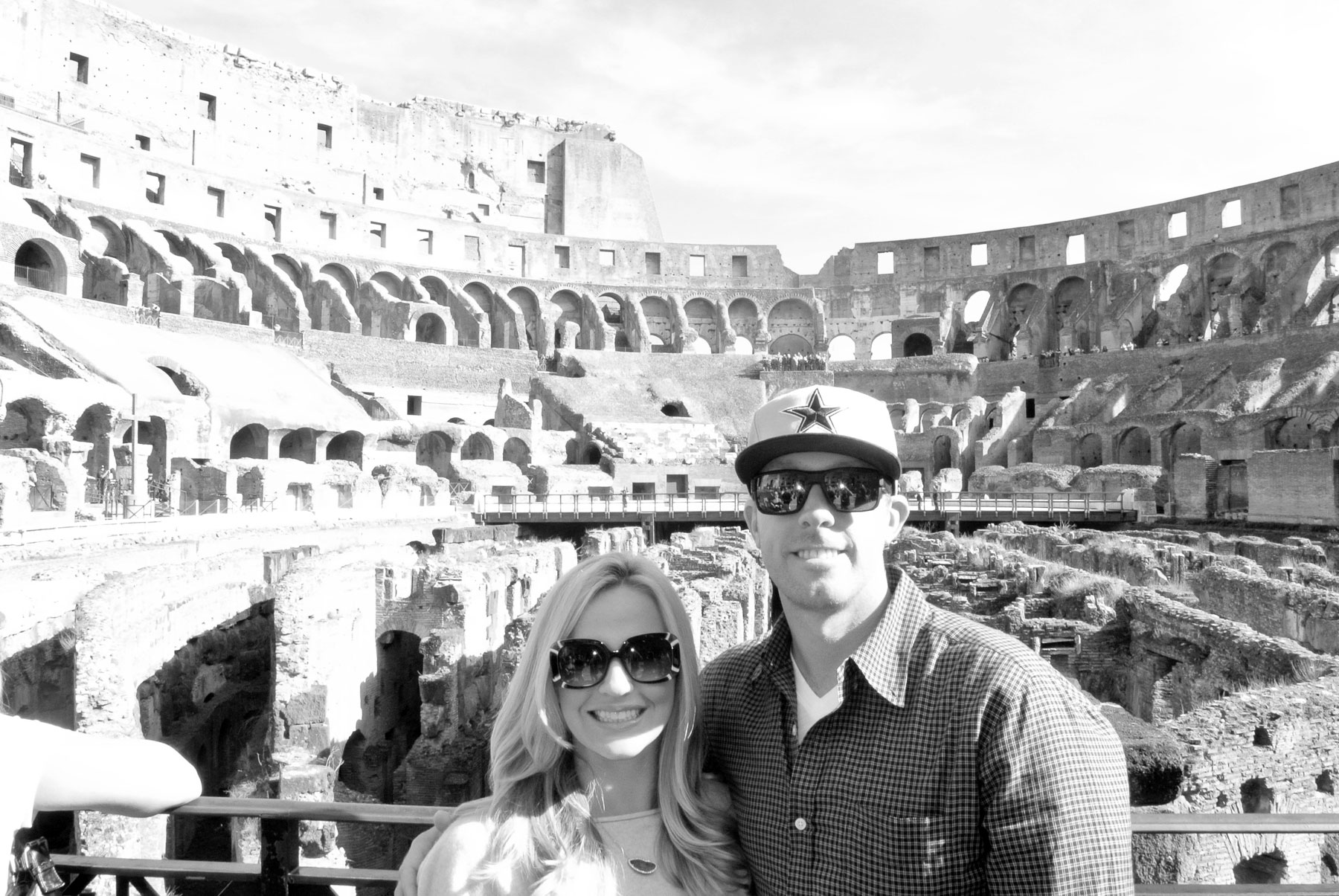 While the couple was sure of what they wanted from the structure itself, they were less certain about how to decorate. So Mark introduced Kandi and Hunter to his longtime friend and collaborator, designer Debra Owens, who also happened to be from Kandi’s hometown of Odessa, Texas. They hit it off immediately, and Debra set to work merging the couple’s styles. “Hunter likes more modern, and Kandi likes more cozy-comfortable,” she says. “So we just started melding all the things that they liked together.”

“Debra really helped us with our vision and wrangling our ideas,” Kandi says. “When you’re building for the first time, you’re kind of all over the place, and you don’t really know your style. We had to figure all that out.”

She also helped direct them to the best resources the industry has to offer. The couple quickly fell in love with the Polvo chandelier and a Nancy Corzine sectional at Allan Knight, a selection of Élitis and Maya Romanoff wallpapers at Donghia, and rugs for just about every room from The Rug Company.

“We were equally involved in the process. We picked everything 50/50.”

“Debra showed us so many things we’d never seen before,” Hunter says. “It was fun to dig into the different parts of a house and all the aspects of it. It was daunting at times, but she was such a good teacher for us. We wanted to see as much as we could and use this time with her to learn.”

Hunter was very involved in all aspects of planning the house, but particularly when it came to the basement, which boasts a basketball half-court, a gym, and a golf-simulator room. Hunter picked out all the lower level’s wallpapers and finishes and chose a specific shade of green—the color of the jackets given to winners at the Masters Tournament—for the cabinets in the simulator room. He and Kandi both like to take credit for the wall-sized rendering of the Augusta National clubhouse that makes it seem like you’re driving up iconic Magnolia Lane when you pull into the garage. “Whenever we have these really great ideas, we forget who came up with them,” Kandi laughs. “We both like to think that we did.”

Combining households can be challenging for any couple, much less when you add in the stress of building a home from the ground up for the first time. But Debra was wowed by the way the couple worked together. “I didn’t hear one cross word,” she says of the time they spent designing. “They’re very much in love, and it shows. Kandi was very concerned with Hunter getting what he wanted, and he wanted her to have what she wanted.”

“I know building a home can be a struggle, but we enjoyed every second of it.”

In the end, they both got exactly what they wanted, and they couldn’t be happier with the results. Not only does Hunter love his underground man cave, but Kandi loves the extra time it affords him at home. One of Kandi’s favorite rooms is the colorful playroom off the kitchen, where she spends hours on end with their 1-year-old daughter, Zoe. The walls of windows slide open to the backyard, one of the family’s other favorite places to spend time. “We really love it out there,” she says. “Hunter’s grilling, we’ve got the TV on, we’re in the pool hanging out.”

Debra’s equally thrilled with the finished product, which she says reflects the couple who calls it home. “It’s young and it’s playful and there are a lot of bright colors, but there are also some very sophisticated elements,” she says. “Their master bedroom is one of my favorite rooms I’ve ever done.”

Mark loves the fact that the house doesn’t show all of its cards at first glance. “We call it the iceberg,” he says. “You see the top and you don’t think much about it, but it keeps going down and getting bigger. It’s just one surprise after another.”

As happy as they are, the Mahans can’t wait to do it again—so much so that they’ve listed their home for $9.5 million. “We’ve got the bug,” Kandi admits. But they won’t be leaving Dallas any time soon. Not only is it convenient for Hunter’s travel demands, the couple regards it as home. “It’s the perfect blend of big city and small-town feel,” Hunter says. “It’s got amazing restaurants, shopping, and all the sports teams you could want. It’s a comfortable place to be and to grow our family. It has everything you want in any stage of life.”