Most people have mixed feelings about taking on a home-building project.

Laurie and Sands Chipman are not most people. “It was always our dream to build a house,” Laurie says. She and Sands met at UT—Laurie hails from Beaumont and Sands from Houston. After graduation, they relocated to Dallas, got married, moved into a Devonshire bungalow, and had three kids. And eventually, they outgrew the house and began searching for the next perfect spot. 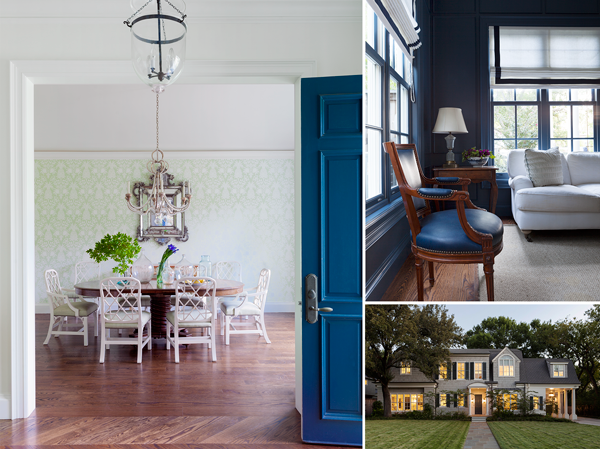 LEFT: “We definitely knew we wanted to use pineapples somewhere,” Katie Collins says. So she and the Chipmans decided on a custom Carleton V. patterned wallpaper in the dining room. Seating by Hickory Chair is covered in fabric by Peter Fasano, and the dining table was Laurie’s maternal grandmother’s. The dining chandelier is by Niermann Weeks. TOP RIGHT: The library is home to a Restoration Hardware sofa and antiques from Sands’ family. The paint is Benjamin Moore HC 155 Newburyport Blue. BOTTOM RIGHT: The exterior of the Chipmans’ home.
They found it—a lovely older Colonial in Greenway Parks. The Chipmans brought in Sands’ childhood friend, Houston architect Ryan Gordon of Gordon Partners Design, LLC, to take a look. “The project began by analyzing the existing structure, but there were some challenges, like 8-foot ceilings,” Gordon says. They spent six months trying to make it work before deciding to start over.

“Once we realized we were going to scrape it, we began talking about style and architecture,” Gordon says. “The big challenge was Greenway Parks. It has some very specific guidelines—setbacks, lot-coverage ratios. It was a puzzle to fit it all within the parameters.” The Chipmans knew they wanted a home that wouldn’t be out of place in Long Island or Martha’s Vineyard. And that went for the interiors, too. 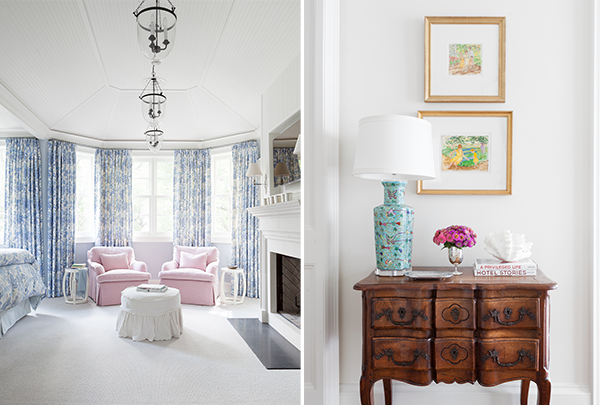 LEFT: “The first thing Katie Collins showed us for the master was the fabric, and that‘s the fabric that we chose. She really understood us,” Laurie Chipman says. Collins used the Scalamandre fabric for the drapery, bedding, and headboard. Laurie wanted pink chairs, so they created a comfortable sitting area in front of the fireplace in just the right hue. The chandeliers are by Circa Lighting. RIGHT: In the entry, the table and lamp are antiques that once belonged to members of Sands’ family. Collins reworked the lamp and added a Lucite base and a shade. The paintings are by Donald S. Vogel.
To that end, the team brought in interior designer Katie Collins of Collins & Sweezey. Collins had just completed a project in Martha’s Vineyard, so she knew exactly what aesthetic the Chipmans were going for. She entered the process early and collaborated with Gordon to design items like the fireplaces, implement materials, expand living spaces, and select fixtures. “I would show him pictures, and he would draw it up,” Collins says. She also worked closely with Laurie during the process. “Laurie did a great job. She knew exactly how she wanted the house to feel. Every picture was from the beach—air blowing through a room,” she says. “And it does feel like a summer house because it’s just so happy. It’s airy—and there’s so much natural light.”

Color is also key here. “They do not like anything with any brown,” Collins says with a laugh. She and Laurie chose to use a number of colorful paint colors and wallpapers throughout the house. “They like clear colors. Sands really likes blue,” she says.

Collins worked hard to employ the past and present in each home—mixing family heirlooms with child-friendly fabrics. “There are three young children who live here, so every room has to be kid friendly. Even a formal living room has to be almost bulletproof,” she says. “Kids are going to jump on sofas and sit on chair arms.” 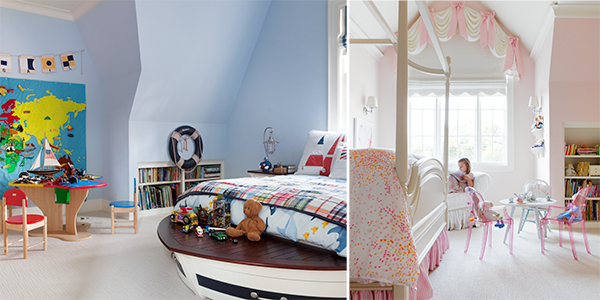 LEFT: The best part about the new house? “Everyone has their own room now,” Laurie Chipman says. Her son now has plenty of room to relax and play with his Legos. The boat bed and map are by Pottery Barn Kids. RIGHT: Laurie and Sands Chipman’s daughter has the room best suited for impromptu story hours and tea parties. Katie Collins created a pink wonderland complete with fabulous window treatments. The bed is from Pottery Barn Teen and is complemented with bedding by D. Porthault. The pink Ghost chairs are from Perch, a store in New Orleans.
Once the year-long process was completed, Laurie was delighted, of course, but she was also a little sad. “It was a big, daunting task, but I never felt like I wasn’t supported. I was actually sad when everyone was gone. It was so fun, and I really miss not having Ryan, Katie, and our contractor, Jim Reilly, to collaborate with every day,” she explains. “People ask, ‘Were you and Sands fighting all the time?’ But it really brought my family closer.” So does that mean she’s itching to do it all over again? “Well, this house is so perfect. I don’t really feel the need,” she says.