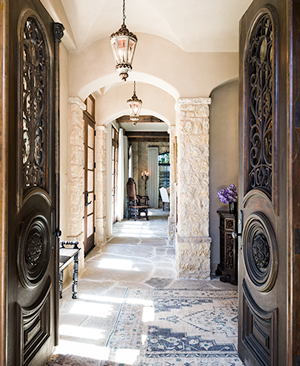 The Roughtons’ entry showcases their great attention to detail. “All the light switches match the walls. Plugs fit in the baseboards. We have lots of pocket doors—they perfected them to open like they do and be hidden. There are lots of finishes that we had done throughout the house,” Brian says.
Kayla Roughton met her future husband on Prescott Avenue.

Brian Roughton was in a tux. She was in a car. When Kayla pulled up to the driveway to pick up a friend, Brian was on his way out to a black-tie affair. “I saw him and said, ‘I know you.’ And he replied, ‘You don’t, but you should,’” she recalls. “He got my phone number from his neighbor, and we never not dated after that.”

They married, had children, and eventually settled in Bluffview. Brian opened the Roughton Gallery, known for its 19th- and 20th-century American and European paintings, on Fairmount Street. All was well until he went in to negotiate with his landlord. “They wanted to redo the lease, and I wanted to buy the building,” he says. When that didn’t work out, he began looking for new digs. That’s when he found a historic building down the street built in 1931 and designed by Fooshee and Cheek, the architects behind Highland Park Village. He immediately talked to the owner, who was willing to sell—but with a caveat. Brian had to buy the adjoining vacant lot, too. “That’s when I came up with the bright idea of building a house,” he says. “Kayla was less than pleased.” 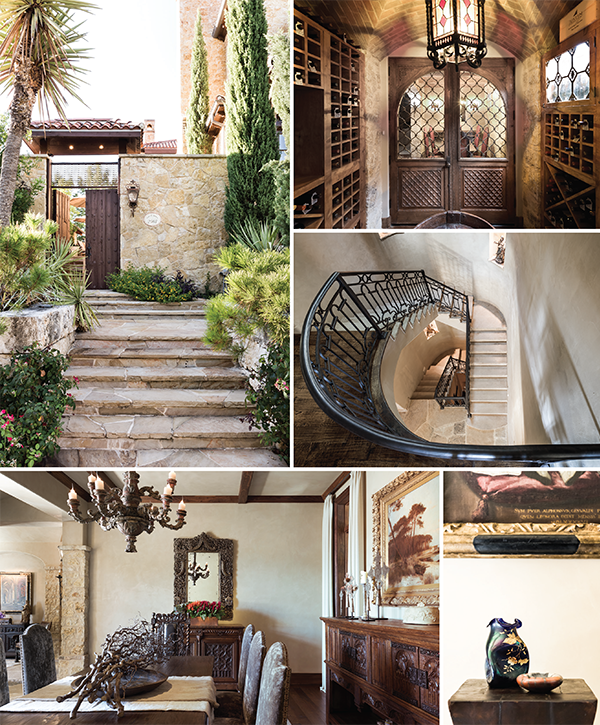 (clockwise from top left) The walled exterior of the Roughton estate; The basement is the ultimate adult playground, complete with a temperature-controlled wine room; The elaborate stairwell leading to the basement; The Roughtons have filled their home with treasures they’ve collected on their travels. They spend quite a lot of time in Santa Fe, where they have a home; The custom dining room table is 11 feet long and seats 14 people, which comes in handy. “We’ve had 30 to 40 people for Christmas every year for the last 30 years,” Kayla says.
Once she was convinced, they agreed that they needed an architect who could create a house that would complement the existing gallery space. They decided on Dallas architect Christy Blumenfeld shortly after meeting her. “Christy and Kayla hit it off immediately,” Brian says. “We would take her with us shopping in Santa Fe and various places, and she would draw things into the plans. We got a builder from a friend—Jim Manis. Anything we wanted to do, he said it could be done. He seemed to be the perfect fit.”

The construction process was anything but quick. “We wanted to mirror the style of the gallery, and it had natural limestone walls and a basement. We had to get our rock out of the quarry in Granbury, and then it would come by the truckload to Dallas, uncut,” Brian says. “That was the process. Sometimes they would run out of stone or it would rain.” Stone retrieval wasn’t the only issue. The team hit solid rock when they dug to create the basement. “It was almost like granite. We thought we would hit water—this area is called Cedar Springs for a reason—but we didn’t,” Brian says. 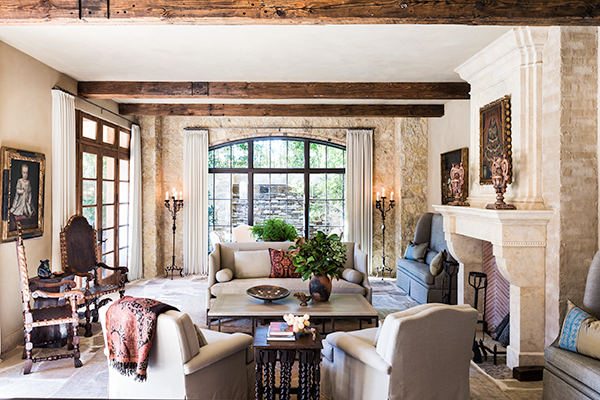 “I love the great room. It’s a great destination for guests,” Kayla Roughton says.
The Roughtons devoted a great deal of time to planning and executing the outdoor living areas and found inspiration on their travels. Their charming cabana bath was inspired by a house they rented in the South of France. “The little niches for towels and the candle lights—that’s where the idea for those came from,” Kayla says. A trip to Carmel inspired the water wall by the pool. As for the pool, the Roughtons were clear that they wanted it be a very “adult” area. “We wanted to have a pool that wasn’t like Disneyland. It has a dark bottom, and it isn’t deep,” Kayla says.

Throughout the entire process, the Roughtons shopped. “We took nothing from the other house. We bought as we built. Fortunately, it took three years,” Brian says. “We wanted things that would fit the house. We bought art especially for the house. We had certain furniture made.” Additionally, they bought antiques at auction, and designer Laura Lee Clark Falconer helped select fabrics. 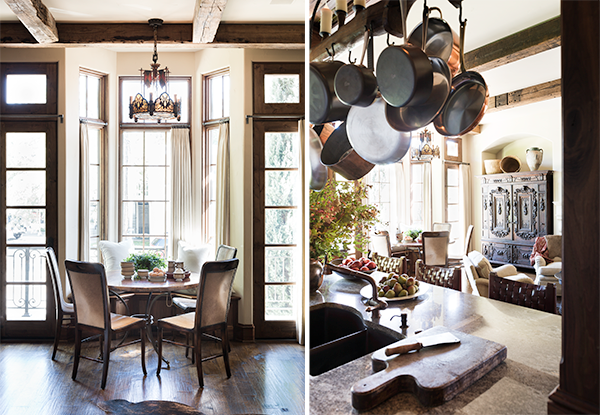 LEFT: The breakfast nook in the kitchen offers views of the charming neighborhood, which is neatly tucked between Maple and Oak Lawn avenues. RIGHT: Kayla Roughton says she will miss the kitchen when they move. She loves to cook, and the kitchen is where the family generally gathers. To that end, there is plenty of seating. The television cabinet in the breakfast area was crafted from a 17th-century Dutch cabinet.
Even with the challenges, the Roughtons look back on the three-year process and proclaim it “fun.” They have created a space that is made for entertaining. The basement is an adult paradise, with media and wine rooms. The great room is lovely for formal affairs. Kayla, a gourmet chef, loves cooking in her large kitchen, and Brian says the family gathers there often. And when the weather is nice, Brian is happy to fire up the Hasty Bake. “We watched the Cowboys game outside last weekend, even though we have the media room,” Kayla says. 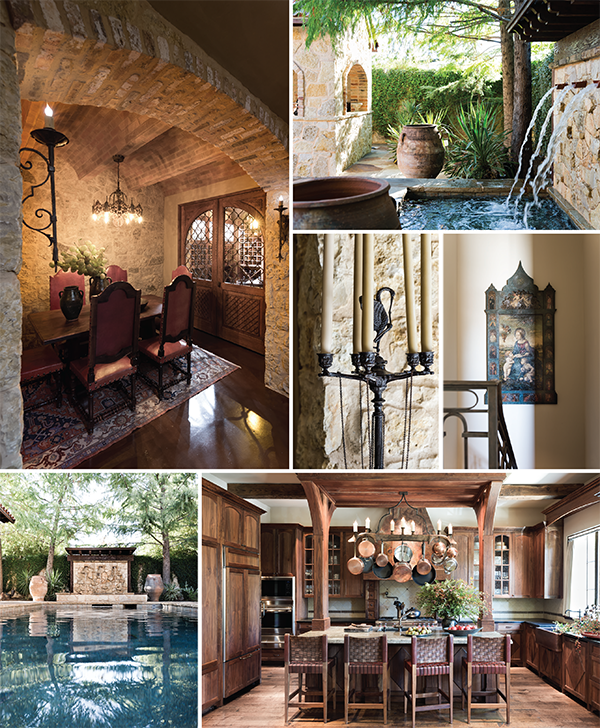 (clockwise from top left) Seating adjacent to the temperature-controlled wine cellar means you won’t have to walk far to enjoy fine wines; The outdoor area features a charming cabana and two water walls; The Roughtons selected art specific to the house; The spacious kitchen is ready for action; The couple’s decidedly “adult” pool and water wall.
But now it is someone else’s turn to host the parties on Welborn Street. The Roughtons have decided to move­, so both the home and gallery space are on the market. The couple hasn’t decided where they will head next, but they’re considering a high rise. “I’m looking for something lock and walk,” Kayla says. But they’ll miss this house. “We hope the next owner is someone who loves and appreciates it as much as we did,” Brian says. There are so many nuances here—so much attention to detail.”