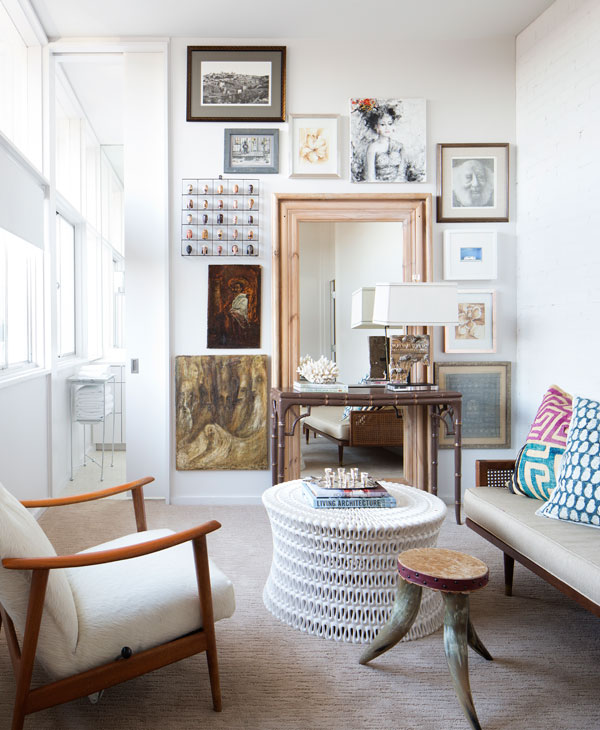 As the vice president of business development and the head of sourcing for Peacock Alley, a company his mother founded 40 years ago, Josh appreciates that kind of attention to detail. Combine that with Meredith’s love of mixing design elements—from Asian to Mexican—and you get a house full of color, culture, and quality.

In the master suite, a mirror from Santa Fe shares space with a Waterworks tub and an Indian light fixture, a chandelier from the Paris flea market lights the closet, and a hammered-tin headboard handmade in San Miguel is the centerpiece of the bedroom. 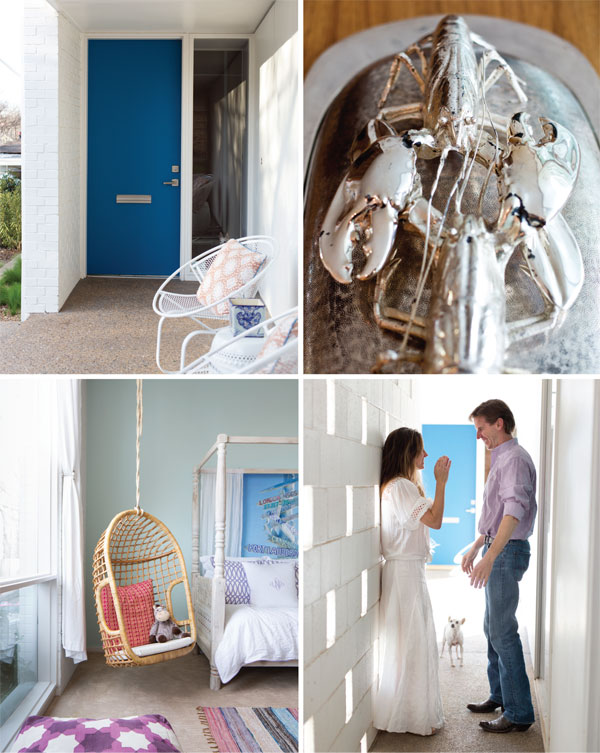 (clockwise from left) The blue front door is one of many pops of color throughout the house. The silver lobster serving tray belonged to Josh’s dad. Meredith and Josh share their home with three kids and two toy fox terriers. Peacock Alley linens complete the look in the Needleman bedrooms. photography by Stephen Karlisch
photography by Stephen Karlisch
Other rooms feature items from places even more far-flung: a painting Meredith found in a Beijing teahouse, a carved mirror from Indonesia, a collection of German bar carts. When it comes to decorating, Meredith shuns consistency and cookie-cutter design. “Where’s the story?” she says. “Where’s the history?”

There’s no shortage of history at the Airline house, and there’s nothing about it that fi ts the mold of the neighborhood. When this magazine named the home one of the 10 Most Beautiful Houses in Dallas last year, we called it “a midcentury masterpiece in a sea of Mediterraneans.” 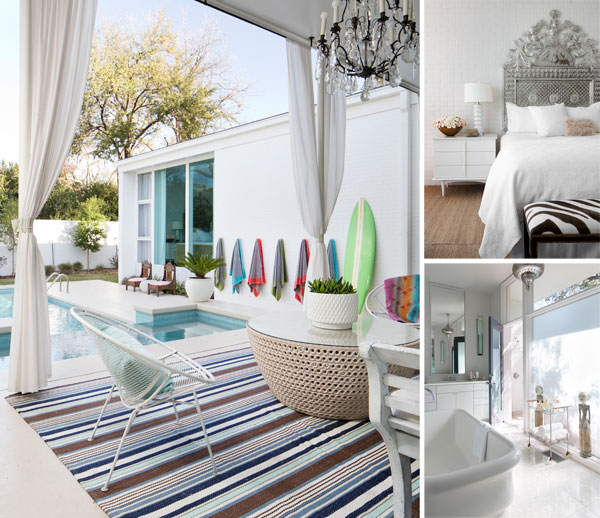 (clockwise from left) Josh and Meredith added the pool when they remodeled. Mike Munsterman did the landscape design. The focal point of the master bedroom is a Casamidy headboard Meredith calls her favorite piece in the house. The master bath features a Waterworks tub and one of the many bar carts the Needlemans have collected. photography by Stephen Karlisch
photography by Stephen Karlisch
That individuality is what attracted the Needlemans when they were house hunting, a process that took the couple to 30 houses they say looked exactly the same. “This house was unique,” Meredith says. “You felt like you weren’t in Dallas, and you weren’t in the Park Cities for sure.”

Friends and family like it, too. Though some were skeptical in the beginning, the final result won them over. “Now everybody wants to have the party here,” Meredith says.

The Needlemans, of course, are more than happy to oblige.