Ray Balestri had his eye on the Turtle Creek property for years. Long before he moved in—before he was married to wife Heather even—he saw the house every day. “I used to drive by it on the way to work for years and years,” he says. Ray and Heather met in 1996 in an environment worthy of a romantic comedy: an elevator. After three years of courtship, the two married in 1999. And when the house came on the market the same year, the couple couldn’t resist a peek. “We loved it as soon as we saw it,” he says. The in-residence elevator couldn’t have hurt. They made an offer immediately.

Unfortunately, the house was far from move-in ready. Originally built in 1946 for Royal A. Ferris Jr. and his young wife, Bertie, by architect Thomas Broad, the house was considered quite modern for the time. It was one of the first homes in Dallas to boast air conditioning, as well as one of the first to have an elevator. “We still have the original blueprints,” Ray says. “They are actually blue paper with white lines, hand-drawn.” Dallas history buffs will appreciate that Royal Lane got its name from Ferris, who was the co-owner of Browning-Ferris Machinery, which later became BFI. (This fact would become especially amusing once the renovations got under way and a BFI Port-O-Let took up residence in the driveway.) 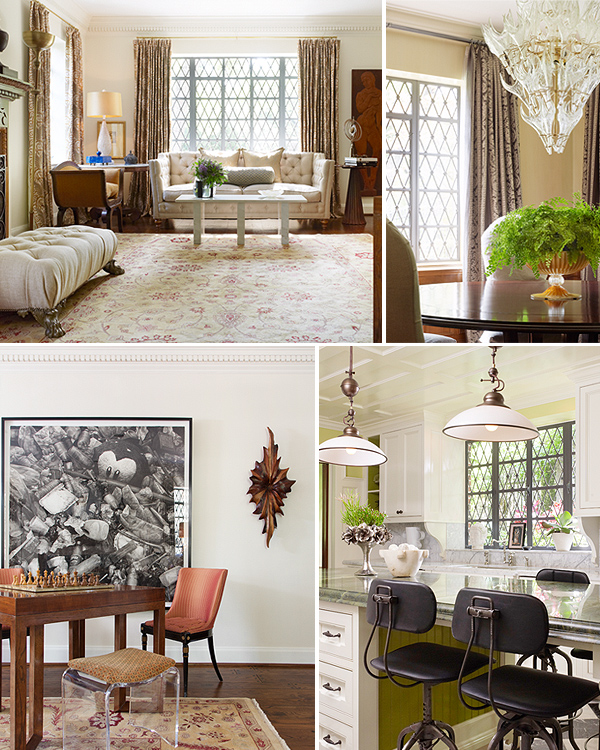 (clockwise from top left) The Balestris looked to Grange Hall’s Jeffrey Lee for help selecting pieces such as the marble coffee table and winged chair for the living room. John Runyon is instrumental in helping the couple add to their extensive art collection. The formal dining room—with the original Murano light fixture—is the ideal place to host dinner parties. The Balestris opted for an ultra-modern kitchen when they originally redid the house. This is not that kitchen. In 2008, the couple decided to create a space that was a little more in keeping with the rest of the house. Details such as the vintage Toledo stools, Nymphenburg piece, and the oil painting by Jenny Honnert Abell on the windowsill complete the room. Visitors can ponder their next chess move while admiring a charcoal on paper by Joseph Stashkevetch and a wall carving by Michael Wilson. photography by Stephen Karlisch
photography by Stephen Karlisch
Royal and Bertie were the only owners of the home—the two died in the 1960s and 1990s respectively—and nothing had been updated in the house since it was built. Ray knew that some of the things he loved most about the house—the solid brick walls, steel girders, and cement floors—would make alterations difficult.

Enter architect Overton Shelmire, who designed the first round of renovations, which included updating the entire house and adding a three-story spiral stairway entrance off the motor court. Contractor J.K. Boone, now retired, also was on the case. “He was awesome,” Ray says. “He knew more about house construction than anyone I’ve ever met. I never once had a disagreement with him.” After two years of construction, the Balestris moved into their new digs in 2001. 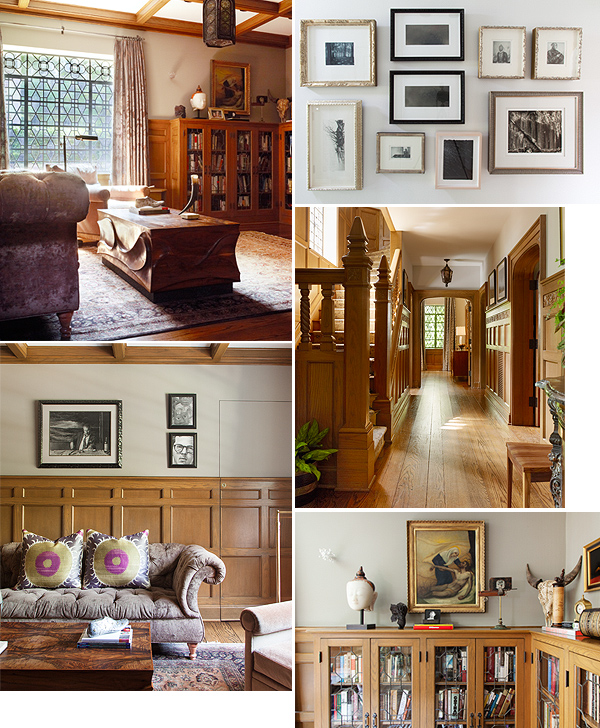 (clockwise from left) The library features plenty of light, a coffee table carved by Michael Wilson, and the Balestris’ book collection; framed lithographs in the hall; another view of the front hall and the original woodwork; one corner of the library boasts works such as a 16th-century Balinese alabaster sculpture and a bronze handkerchief sculpture by Joseph Havel; a wall in the library is home to a pencil-on-paper piece by Kent Bellows and a double self-portrait by Tom Moody. photography by Stephen Karlisch
photography by Stephen Karlisch
With that, the Balestris thought construction was a thing of the past. Heather and Ray began working on the interiors—buying furniture and art. They brought in landscape designer Lee Roth—and later Glenn Bonick—to design the grounds. And perhaps most important, the couple had two sons—now 5 and 7—who very much loved the third-floor fantasy kids’ suite. (“We had kind of done it before we even had kids,” Ray says.) But after a few years, the couple realized that one of their updates was a little too updated: the kitchen. “The style was too modern, and the room was too small,” Ray says. So in 2008, Mark Barry of Barry Bull Ballas came in and redesigned the kitchen, the entryway, and the wrought iron and glass front door. Six months later, the work was done—for real this time.

The Balestris are hands-on when it comes to selecting contemporary furniture that complements original details such as the wood paneling and crystal light fixtures. Jeffrey Lee of Grange Hall and Lizzie Bailey have been instrumental in making the new mix well with the old. 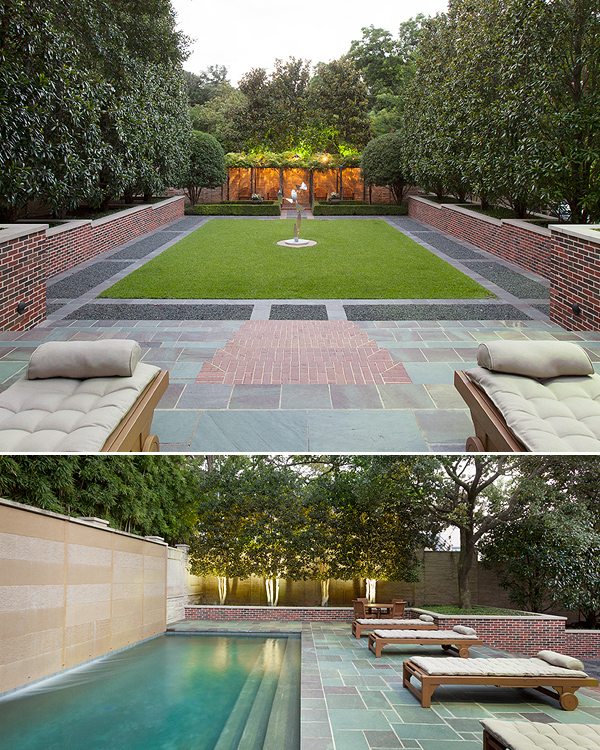 The formal garden is also visible from the pool area. The sculpture is by Lin Emery. The pool area features a water wall and Nellie R. Stevens holly that looks pretty amazing with the lights. The area gets plenty of use—Heather and Ray’s two small boys love to swim. photography by Stephen Karlisch
photography by Stephen Karlisch
And when it comes to selecting art, the couple prefers to consult with dealer John Runyon before making a big purchase. “Runyon is the best. He has encyclopedic knowledge,” Ray says. “We used to buy pieces when we traveled, but we never do that anymore.” The Balestris are practical when it comes to collecting—they want items that will appreciate. When asked which piece he would save in case of fire, though, Ray hesitates, and finally decides on a work by Jenny Honnert Abell. “Truth be told, I’m not all that much attached to things. I would save the Abell, though, and some diaries that Heather and I kept on our trips together before we had kids.”