One would never know that Cynthia Collins is outnumbered.

A visit to her 4,000-square-foot University Park home—resplendent with pops of pink and soft blues and romantic pieces of art—belies the fact that Collins is but one woman in a sea of men. Okay, that might be a bit dramatic, but she is the sole female in a family of five. Collins and husband Bruce, along with three boys ranging in age from 16 to 19, have lived here for the last 12 years. She says the boys are undaunted by the daintier aspects of the residence and, in fact, add their own touches. “The kids have friends over all the time. There’s always a set of golf clubs or a bike in the dining room,” Collins says. 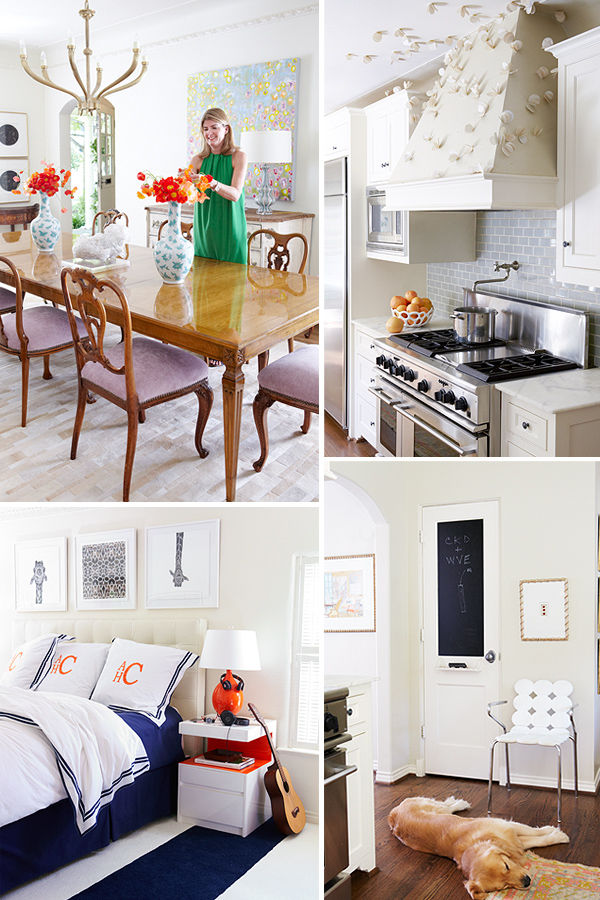 (clockwise from top left) Designer Cynthia Collins transformed a living room into a formal dining room. The vintage Italian dining table seats 14. Collins found the antique English chairs at an English flea market and covered them in Osborne & Little fabric. The vintage Murano lamp, ceramic vases, and crystal on Lucite are all from Blue Print. The kitchen boasts an installation of floating butterflies by artist Jennifer Prichard that Collins found at Scott + Cooner. Murphy lounges on an Oushak rug in the kitchen. The Marshmallow chair is from Scott + Cooner, the framed English wax seals are from an English flea market, and the initials on the chalkboard belong to Collins’ niece, designer Caroline Davis. The bedroom of Collins’ 16-year-old son features photographs by Libby Goff and striped carpet made up of two piles sewn together by Interior Resources. The lacquered side tables, Matouk bedding, and Motegga lamp are all from Blue Print. photography by Aimee Herring
photography by Aimee Herring
Cynthia and Bruce Collins grew up in Highland Park. After briefly going their separate ways—Bruce went to SMU and Cynthia attended UT—the two reunited and eventually married. In 2000, when looking to move, the couple knew exactly where they wanted to settle down. “I loved this pocket of University Park,” Collins says. “There are lots of friendly neighbors. And I liked that it’s very private—there’s that feeling of privacy as it dead ends into Golf [Drive].” They moved into the 1930s-era home and left it as it was for four years. “But it needed to be done,” she says.

Luckily, Collins was up for the task. Not only is she a noted designer, but she’s also the owner of Collins Interiors and one of the tastemakers behind Blue Print, the Fairmount Street store full of home furnishing treasures. She opted to take the house down to the studs. “We started over with the foundation, and everything followed,” she says. “We added more quality. Now the windows match. The moldings match. We added plaster cove moldings, that kind of thing. The kitchen had a bad remodel, so we started over and matched the original doors and cabinetry.” The year-long remodel made the house a lot more family-friendly. “We needed a mud room. We have several dogs, golf clubs, and three kids,” Collins explains.